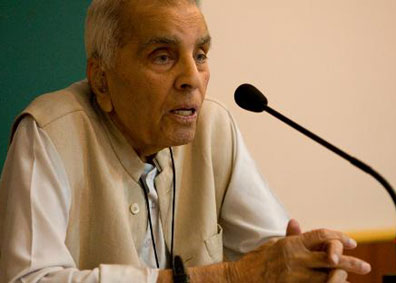 In your article, ‘A P.M. at Work’ published in The Statesman on June 15, 2014, you have waxed eloquent about importance of justice, ethics, etc.  My humble advice to you, sir, is the famous dictum: “Physician heal thyself.” Let me elaborate.

You have known me and I have known you through  small time chance meetings in a television studio,  at the I.I.C., New Delhi and later on at the golden wedding anniversary of a common friend, a retired Chief Justice.

You are aware, dear Sir,  that by using the fabricated  findings of the former P.M.’s High Level Committee chaired by you, an unprecedented wanton discrimination has been heaped by Shri Salman Khurshid,  the former Minister of Minority Affairs, on the unwashed children of nearly 34 crore Hindus living below the  poverty line.

It was fully established by Salman Khurshid, in his press conference on 29th May, 2012 at Delhi, that he deprived the unlettered daughters and sons of the poorest Hindus living below the poverty line, mostly in rural areas. The High Level Committee chaired by you was born in sin of  grave constitutional impropriety.   The task assigned to you sir, had been entrusted  in 1992 by the Parliament to the National Minorities Commission by enacting a special law called The Minorities Commission Act, 1992.   The responsibility for  the protection of the rights of minorities   and ensuring their welfare had been assigned by the Parliament in terms of  the  aforesaid legislation to the Minorities Commission.  Thus, the very act of the Prime Minister constituting a High Level Committee in March 2005, by an executive fiat for  one single religious minority was patently unconstitutional and bad in law.  The worst  aspect of the sinister move was that you, a Judge well versed in law, did not inform  the P.M. that constituting the proposed Committee was a  violaton of the Constitution.

For  decades an unsubstantiated  belief has been propagated  across the country that economically and educationally, Muslims are more disadvantaged than the Hindus.  That is an unalloyed lie. This bogey of Muslim backwardness  is  being  unabashedly  used  by the  powerful  pro-Muslim vote bank lobby to  bestow many  unmerited  benefits  and  concessions, including  nearly twenty million scholarships and concessional educational loans exclusively on the Muslims and four other minorities.

It  was revealed by Salman Khurshid  on May 29, 2012, that during the last 6 years not one single scholarship was given to the daughter or son of any poor Hindu.  Nor were any cheaper  educational or entrepreneurial  loans advanced to any Hindu poor, while funds worth several lakh crores  were advanced to the  children of better placed minorities.

This strategy of religion-based discrimination was implemented in pursuance  of  the  communally divisive  vote bank policy enunciated in the Prime Minister’s notoriously  famous  “Muslims First”  policy  statement made on December 9, 2006, by the Prime Minister.   Inexplicably the  aforesaid policy statement was made by Dr. Manmohan Singh  on the  birthday  of  Sonia Gandhi,  Chairperson  of   the United Progressive Alliance.  And thereby hangs a tale !

Sir, you cannot deny that crores of  poor Hindu children belonging to the perennially  famished  hoi polloi  of  rural India have been deliberately deprived of any share in  the 20 million scholarships awarded to the  five minorities,  including  four economically and educationally better placed  communities than the Hindus. These four super-privileged minorities are the Christians, the Parsis,the Buddhists and  the Sikhs  all of whom happen to be show stealers in literacy average, economic  prosperity, urbanization and education.

The data  pertaining to infant and child mortality, degree of urbanization and life expectancy at birth available in public domain in 2005  proved that it is the Hindus, and not the Muslims, who are the most disadvantaged religious group.

Hindus are far behind the Muslims in the first four human development indices, excepting literacy in which Hindus with 65.1 percent literacy are marginally ahead of Muslims who have the literacy average of  59.1 percent. But you and  your team-mates lacked the moral courage to identify and write that one single factor responsible for lower Muslim literacy average was the lower ratio of literacy among  Muslim women at a meagre  50.1 percent –lower by 3.6 percent than the national average of female literacy at 53.7.  Thus, this  important cause of lower female literacy among Muslims  has been ignored by you sir.

By sheer fraud, the children of  34-35 crore  poor Hindus were  deprived  by Salman Khurshid with your assistance sir. This defrauding of the majority religious group, mostly the rural Hindus,  was launched by the then Prime Minister Manmohan Singh in June, 2006, in the garb of  Prime Minister’s New 15 Points Programme for Welfare of Minorities.  Courtesy the fabricated findings recorded by you, the poor Hindu children were deprived of  any share in the twenty million scholarships showered on Muslims, Christians, Buddhists, Parsis and the Sikhs. The data available in the public domain in 2005  rebutted   your Committee’s malicious findings.

In our seminally researched book, The Majority Report, authored by me and my friend J.P. Sharma, we have cited five data-based rebuttals of your fabricated  report sir. All these rebuttals are in the public domain. A copy of the book was sent to Salman Khurshid more than 4 months ago, followed by two subsequent reminders.  But he did not respond.  I hope at least you will respond.