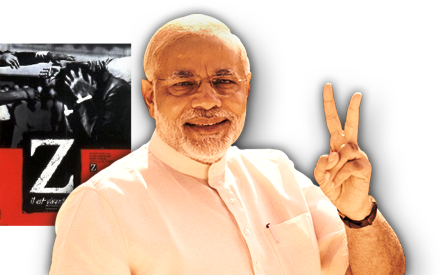 I have been concerned for some time that the Congress Party’s sharply declining poll numbers would lead them to adopt desperate measures to hang on to power. I doubt they can win in 2014 in a fair fight. Therefore, there are three obvious things I reckon they might do (and I am not alone: the bookies are laying odds that the BJP will win, with the caveat that all bets are off “if any leader is dead” [sic] http://articles.economictimes.indiatimes.com/2013-11-08/news/43822323_1_saffron-party-the-bjp-bookies):

All this reminds me of the great 1969 film, Z, by Costa-Gavras. This is, in my humble opinion, the best political film of all time. It is based on real-life events in Greece in 1963 when a popular leftist leader was assassinated in a planned conspiracy by the ruling right-wing military junta. They were able to kill him, but the spark he lit remained alive; a crusading reporter helped the investigating magistrate (brilliantly played by Jean-Louis Trintignant) bring out the truth of the conspiracy; the military ended up staging a coup d’etat, suspending civil liberties and banning “long hair on men, short skirts, the Beatles, Sophocles, Tolstoy, Socrates, Mark Twain, Samuel Becket, the free press, new math, and the letter ‘z’, which means ‘he lives’ in Greek”.

The Z story haunts me, because I have no doubt that the current dispensation in India will not hesitate to do anything – and I mean anything at all – to hang on to power. It is becoming evident that given freedom of choice, the Congress will be decimated in 2014 thanks to popular disgust at its corrupt ways. But that is precisely why the Congress urgently needs to stay on in power: the prospect of skeletons tumbling out of the closet must be frightening.

I had been hoping that the physical elimination (viz assassination) of Modi would be considered the very last option. But in the aftermath of the Patna rally blasts, which could be taken as a warning, that possibility looms larger. It is also not a new threat. A dynasty supporter who doubles as a media type wrote a couple of years ago about a “sudden removal” of Modi from the scene: it is hard to imagine what else it might mean other than liquidation.

The serial blasts in Patna were low-intensity and intended, it is believed, to create panic and thus a stampede among the physically present. They could have led to hundreds of deaths among the million-strong audience. In addition, the threat of such violence would almost certainly keep away the mammoth crowds from future rallies, thus effectively nullifying Modi’s ‘Big Mo’, or momentum.

Some believe that the blasts were intended to kill Modi, but that seems unlikely: if it were true, there would have been much more powerful explosives, and they could just as easily have been smuggled into the venue, given the lax security. The fact that the perpetrators chose mayhem over murder (apparently) is intriguing. It must be that they have put Plan A on the back-burner for the moment: after all, the suspects see their interests as coinciding with those of the Congress. The Congress, at the very least, is the known devil.

Let us move on to Plan B. There is considerable evidence that the existing Electronic Voting Machines are sitting ducks for manipulation. A few years ago, computer scientists (www.indiaevm.org ) demonstrated how they could be messed with in many ways, including using an ordinary cellphone to trigger a Trojan Horse program to quietly vacuum up votes for the desired candidate. For their pains, one of the computer scientists was arrested.

It is widely known that America’s EVMs are tamperable – so much so that they have banned them in several states, and they still tolerate paper votes with their ‘hanging chads’ etc. In Germany, a constitutional court banned them because they could not guarantee the voter’s constitutional right to have his/her vote register the way they voted; that is, the EVMs were shown to be tamperable. Similarly, in many other developed nations, EVMs are forbidden.

It is entirely possible that the surprising 2009 general election result was rigged in a few judicious and key constituencies. The results of the election (a Congress majority) didn’t match the pre-poll surveys that indicated dissatisfaction with their UPA1, and a hung parliament or an Opposition win. The results in 2009 were nothing short of miraculous in certain parliament seats, where contestants leading by tens of thousands of votes mysteriously found themselves on the losing end.

Similarly, a well-known columnist reported finding strange data on the EC website. Some results were found on the EC site before counting started! This is also surely miraculous (unless there is some logical explanation). The EC kept stonewalling when this was pointed out. The fact that the Chief Election Commissioner at the time was an official with a rather dubious past was also striking.

We can expect Plan B to be tried out in 2014 also in a judicious, low-key way. This is because the VVPAT (Voter-verified Paper Audit Trail system) EVMs that the Supreme Court ordered are not likely to be available in time for the 2014 elections, at least in quantities that can cover more than a fraction of all polling stations. Thus the opportunities for digital vote tampering are still as tempting as ever.

Then there is the ever-popular plan C. It could be said, as Ram Jethmalani did in a recent essay (“Who’s afraid of Narendra Modi?”) in the Sunday Guardian, that the entire game-plan of the Congress for ten years has been to prevent Modi from contesting the Prime Ministership. There are many other options. One would be to convict Modi of something (for example, the Ishrat Jehan case or the Sohrabuddin case) and thus legally render him ineligible to contest.

Another ploy is a new meme being mouthed by Congress luminaries: that the 2014 elections are not a contest between political parties, but between “the Congress and the RSS”. The implication here is that the RSS has been banned before, and therefore it can be banned again under some pretext. Of course, Modi as an RSS member will be subject to the same ban. The proposed, amazingly fascist Communal Violence Bill, which essentially makes it a crime to be a Hindu, could also be used to exclude Modi from the contest.

A third approach would be to be nibble away at various freedoms. For instance, certain orders to TV channels basically saying “Don’t show Modi in a good light”. The proposed ban on opinion polls is another. India’s Press Freedom Index has plummeted to rank 140 in the world in 2013, down from 105 in 2009. There are frequent attempts to bully and terrorize free speech on the Internet, with bloggers being jailed and threatened. RTI activists and whistleblowers are regularly killed. All this creates an atmosphere where dissent is simply stifled.

The cumulative effect of all these is that there is a de facto Emergency in place. It would not be difficult for the Congress to put in place a full-fledged de jure Emergency either. Once that happens, no elections, no habeas corpus, no rights; say hello to midnight knocks on the door and sinister Emergency Administrators. This is by no means beyond the realm of possibilities.

So will the Congress pursue Plan A, B or C? I believe by instinct they would prefer A. But here has been a quantum change in the situation on the ground based on grass-roots enthusiasm for Modi. It is no longer a good idea for the Congress to assassinate Modi: a tipping point has been reached, and it would be counter-productive. Modi has become such a phenomenon that if he were to be assassinated, the resulting sympathy wave would propel the BJP to power. Thus, in a bizarre way, the Congress cannot afford to assassinate Modi anymore.

Modi is no longer an individual: he is a movement. There were other movements: those of Baba Ramdev and Anna Hazare, for example, which the establishment successfully infiltrated and subverted with their minions. Of course, it is likely that some of their fifth columnists will infiltrate the Modi movement, too. But Modi is savvier than Ramdev and Hazare. And in any case, the movement is bigger than Modi the man.

This is exactly what the military junta found out in Greece, as depicted in Z. They assassinated their foe (Plan A), but then he became so much larger than life that they could not control popular sentiment. Of course, then they resorted to Plan C, martial law; which they could not sustain for long; in the end, the generals had to admit defeat and retreat to the barracks.

The nightmare possibility is a repeat of that scenario in India. If Plan A were to be put in action and Modi assassinated, the Congress would not be able to control the flood-tide of discontent against them. They would be forced to resort to Plan C, martial law, and be voted out if they ever go to the polls. But as in Z, Modi, and his idea of India, would live on. Thus it would be a Pyrrhic, temporary victory for them. As rational beings, the Congress will therefore not pursue Plan A now. At least I hope they will not.