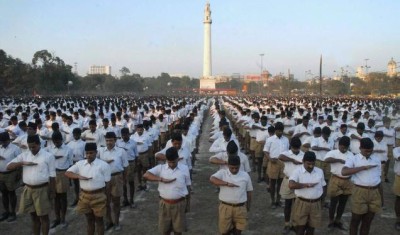 Recently, the IB had come out with a report questioning the motives and agenda of the foreign funded NGOs operating in India.  It is alleged that they have an anti-development agenda, which has caused serious loss in terms of economic growth in India.

Analysts, including journalists, have used various stratagems to divert the attention from the main charge of the IB.  One point they make is that there is foreign funding of NGOs that are set up by volunteers of the Rashtriya Swayamsevak Sangh (RSS).  There is a malicious intention of likening the work done by these RSS-affiliated NGOs as similar to the ones that the IB has made allegations against.

Some of the NGOs set up by the volunteers of the RSS do receive funds from abroad, for which they have the necessary permissions, and accounts are regularly filed with the appropriate legal authorities.  These NGOs are involved in service activities of different types all over the country.  In contrast, the ones mentioned by the IB are those involved in agitations, and ensuring the projects of various types, involving large investments, are held up.  In some cases, even road projects have suffered due to agitation against land acquisitions.

One of the important service activities of RSS-affiliated NGOs is the Ekal Vidyalaya or the one-teacher school.  Nearly 50,000 such schools are operating in the tribal areas, providing education up to the fourth standard.  The students are instructed in the three Rs – reading, writing and arithmetic.  Additionally, they are informed about their own history as well as of the country, so that they develop a sense of belonging towards the nation.  These schools have imparted the necessary skills to the students, whereby they are able to take advantage of the opportunities provided by the state to improve their lives.

One such case is of Kavita Raut. She received her education at an Ekal Vidyalaya school near Nashik.  She then came to stay at a hostel for girls in Hadsul – another project of a RSS-related NGO.  This enabled her to get education till 10th standard.  Here, her running skills came to the notice of Sports Authority of India, who then started to give her coaching in long-distance races.  She went on to win the Bronze medal in 10,000 meters at the Commonwealth Games 2010, and Silver in 10,000 meters and Bronze in 5000 meters at the Asian Games 2010.

Other tribal boys and girls have been able to lead lives better than what they otherwise would have been forced to do.  In turn, these youngsters have gone back to their tribals to help their community members in various ways.  One such way is to be a teacher in the Ekal Vidyalaya schools.

This programme is funded by donations primarily from individuals.  Each school costs about Rs 20,000 per annum, half of which goes towards salaries.  The teachers are also equipped to dispense first-aid, and be counselors to the elders, making them social leaders in their areas.

About 25% of the schools are funded by Indians living abroad.  This has provided them satisfaction that they are able to make some contribution, however small, in improving lives of the people in India.  It has provided a strong emotional link between people of Indian origin.

Then there is the Dr Hedgewar Hospital in Aurangabad.  It was started in 1989 in a premise of 250 square meters and 10 beds, by seven swayamsevaks, who had just finished their education in medicine.  These doctors could have gone into private practice and earned substantial income.  Instead, they decided to take a very small salary to maintain themselves.  And when they got married, and if the spouse was a doctor, they motivated the spouse to also be a volunteer.

Within eleven years, they moved into a 16,000 square meter premise with 150 beds, which has now been expanded to 27,000 square meters and 300 beds.  High quality medical service is provided at minimal cost to those can afford, and at zero cost those who can’t  And today, the hospital also runs projects in 150 villages not just on health, but also on poverty alleviation and skills development.

There is a project of National Cleft Lip Foundation of United Kingdom which sends doctors to developing countries to undertake operations on those who cannot afford the cost.  For India, another RSS-affiliated NGO, Sewa International’s Indian and UK units organize the treatment, with the help of a hospital in Nashik, also run by Swayamsevaks.  About 20 doctors and 15 support staff of Indian origin, as well as British doctors and nurses, come to India at their own cost.  In India, Sewa International locates the patients that need the treatment, bears the cost of medical facilities and post-operation treatment.

There have been allegations made by groups, belonging to the communist ideology, that some of the funding goes to organisations that are alleged to be involved in violence against minorities.  These allegations have been made publicly in the media in India and abroad.  One correspondent belonging to a supposedly reputed financial daily in UK, while he was stationed in India, almost made it his mission to put the RSS-affiliated organisations on the defensive.

The foreign funding agencies of the RSS-affiliated NGOs against whom the allegations have been made have been investigated by the authorities in their respective countries.  And in no case have these authorities found any evidence that would oblige them to take action against these funding agencies.  Yet, the allegations continue to be made, giving a clear indication that there is a political agenda at play, and not the propagation of truth.

The RSS believes in doing positive work for the nation and its people.  Where the funds come from abroad, it is almost always from people of Indian origin, and not the multinational corporations or the charities started by the founders of some of these MNCs.  All the RSS-affiliated NGOs, and the funding counterparts run on minimal budgets, since the members offer their services on voluntary basis.  In contrast, the salaries in the NGOs, and their funding counterparts abroad, would match those in large corporations.

And so, the RSS would like to ask organisations like Greenpeace and others who are under investigation to list out how many people they have impacted in a positive manner.  Let them work for nation building, and the RSS would gladly work with them with the intent of combining energies towards activities that make a positive impact on the lives of Indians.