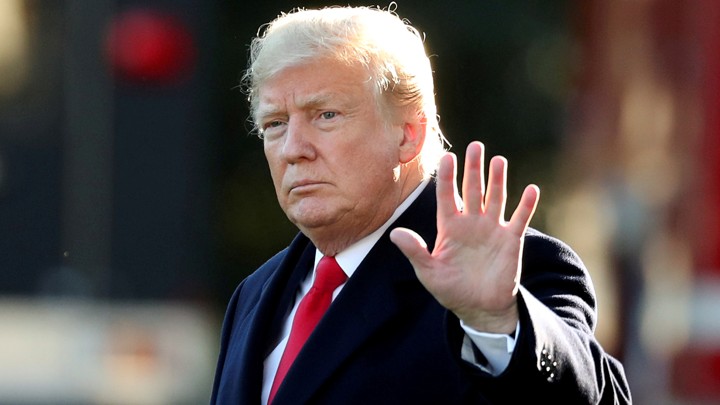 Recent events far from our shores are likely to have an existential and fundamental impact on India’s polity, national security environment, social framework and its ancient culture–cum-patrimony. The epicentre of these events is, of course, the magnificent structure in Pennsylvania Avenue in the American capital, Washington D.C., and which is known throughout the world as the White House.

The person who is behind these events is the U.S. President Donald Trump, who, like his predecessors, is arguably one of the most powerful individuals in history, purely because of the position and office he holds. One does not have to be a committed history buff to be aware about this basic feature of international affairs since 1945 or thereabouts. Till the end of 1991, POTUS (a commonly-used appellation and abbreviation for the President of the United States) shared a common podium with the leader of the Soviet Union as one of the two power centres of the globe.

However, when the Red Flag, the Hammer and Sickle, came down from the Kremlin spires at 7.32 PM of the 26th December 1991, the Soviet Union officially ceased to exist and the U.S. / POTUS became the sole occupants of the world’s stage. There has been no parallel to this hegemony in human history, ever since chroniclers started recording events and developments in an organised manner.

Readers of this essay will be aware of the traumatic impact on India of the collapse of the Soviet Union / USSR / Russia as we affectionately referred to that country in our shores. For at least 40 years, India and the distant superpower in Eastern – Central Europe, extending deep into Asia, shared one of the closest relationships between two independent nations that recent international history has seen. The USSR or Russia, for short, was a true friend of India during these four decades. In fact, it would be very difficult for international historians and political scientists to identify any area that Russia did not genuinely help India.

This essay is not about those halcyon days. Here, I do not wish to digress into the reasons why Russia did so. That is better left for another day and another study. What I wish to do is to briefly give the historical backdrop of Indo-American ties. That the U.S. (or America for short) did not become our natural ally from 1950 onwards is one of the saddest episodes in modern history. There were blunders galore on both sides. The unbelievably venal combination of Nehru and his Sancho Panza, Krishna Menon, was clearly one of the villains in this saga.

But, let us be clear. There were as many culpable persons on the American side, including unmentionably vile creatures like John Foster Dulles, who entered the grammar books in political humour. Wags in Calcutta and in Britain started the famous quip that Dulles represented the superlative form of “dull” and “duller”, as “finest” did for “fine” and “finer”. Readers will get the drift.

The role of the former imperial power, the U.K. (Britain) in creating a rift between India and America should not be forgotten. Nehru had this insane fascination for British royalty and the upper echelons in Old Blighty. He was manipulated and exploited by the Mountbattens and by the old imperialist clique in Whitehall to raise cudgels against the State Department and the White House. There was, in addition, the Caroe Doctrine that the Pakistanis and their armed forces used to build close ties with the American military leaders and the civilian mandarins.

To spend some time on Olaf Caroe and his doctrine is essential at this juncture. Caroe (a.k.a Sir Olaf) was a dyed-in-the-wool imperialist who was in the South Block for many years during the l940s. He came up with the “Great Game” concept, in which he set out his thoughts about containing the Soviet thrust southwards into the Indian Ocean. After 1947 and well into the early 1950s, the Pakistani military establishment and its clever babus were very successful in convincing the Americans that Pakistan would be their bulwark to contain the Russian bear.

Once the Pakistani military-diplomatic establishment successfully convinced the State Department (under Dulles) and the Pentagon about the critical role of Pakistan in combating the “Red Menace”, the lines were drawn in the sand. Karachi (and later Rawalpindi / Islamabad) took over a corner of Washington that enabled the moth-eaten country to play a role in American foreign policy that was completely disproportionate to its size and actual importance.

For decades, America cajoled, encouraged and tolerated the shenanigans of the Pakistani military-mullah combine. The nadir, of course, was the Nixon-Kissinger ignominy in 1971, whose disgraceful ramifications can never be adequately and completely described in serious discourse. American morality and civilisation took such a beating in those awful years that redemption for Uncle Sam would take many decades to accomplish.

Fast forward to Bill Clinton’s visit to India in March 2000. This was the beginning of America’s mea culpa to India, although there was a hesitant beginning during the Kargil war in July 1999. Admittedly, it was a different India that the Potomac was interacting with – an India whose industrial and economic prowess was beginning to manifest itself on the international arena. The Americans, being the inveterate businessmen they are, recognised that there was a new kid on the block and it was not going to ever surrender its allotted position in the new international economic order. The role of corporate America must not be minimised in the slow but unstoppable build-up of the Indo-American entente.

Readers would be aware of the steady rise in Indo-American trade, commerce, technological links and military ties from 2000 onwards. The old pro-Pakistani elements (the Fais of Washington) fought a relentless rearguard war to derail the Delhi-Washington Express but could never succeed. Every American administration that succeeded Clinton followed the same script on India. There were blips like the questionable American conduct before and after the Bombay attacks in 2008. But, Uncle Sam and the lumbering Indian elephant carried on their tryst.

Then came the tsunami in 2014. The WASP mandarins in Washington didn’t quite know how to deal with the new India and its leaders in Raisina Hill. The Obama administration did a quick re-think and recalibrated its policies and stances. A good percentage of the oligarchs in Uncle Sam’s cabin realised they would have to eat humble pie before the new Indian regime, particularly because of their disgraceful conduct with the new PM in his earlier avatar.

Then came the regime change in the White House, with their new kid, Donald Trump, making his way to the Oval Office in January 2017, following his election win in November 2016. At that time, I wrote an essay that attempted to evaluate Trump and his likely stance towards India and the Indo-American entente.

Unlike most of the desi English media, I was not at all sure that a Trump regime, once in office, would provide smooth sailing and calm seas for the Indian ship of state. I added the following note of warning for my readers and for any mandarins reading the article:

“To wrap up, India should be prepared to deal with the likely irrationalities in the Trump Administration with patience and understanding. Our Prime Minister will be our most effective instrument; both Narendra Modi and Donald Trump are quintessential outsiders. Though there are many differences that separate them, their commonalities are equally obvious.

If Raisina Hill fine-tunes its world-view and develops rational expectations from the Trump administration, based on a nuanced assessment of America and its society, then the path ahead can be relatively smooth. Any hype will lead to disaster. Are we, as a country, people, and society, jumping the gun when we comfortably predict a certain pattern of Indo-American relations when Donald Trump assumes office and settles down to governing?”

If anything, this article underestimated the underlying fault-lines in the psyche and fundamental nature of Trump, his supporters, his administration and American oligarchy in general. What has been happening in the Oval Office and in other locations of the Trump administration in the last few weeks are so ominous and disturbing that the GOI and the saffron forces must wake up from their collective slumber and re-assess the Indian stance towards the current American regime. The problem with many members of the Indic regime movement is that they are naive in some of their perspectives. The world-views of a lot of the senior figures are static and rose-tinted.

Therefore, it would be a good idea at this stage to give a simple bullet-point presentation why India, the Modi administration and the Indic forces should adopt a very careful and nuanced stance on Trump and his regime now and in the near future, particularly in the run-up to the American Presidential elections and its fall-out.

ʘ Trump’s litany of offences is getting longer and longer. Earlier, they were confined to tax dodges, inappropriate behavior with women etc.

ʘ Now, they extend to very questionable conduct in international affairs, including involving foreign countries and their leaders in the domestic political affairs of the U.S.

ʘ Babu Trump has also displayed most convoluted political stances, the latest being his despicable sell-out of the Syrian Kurds to the abominable Turks under Erdogan. This ranks near the Munich episode of 1938 on the scale of infamy. If the fellow can do this to the Kurds, what is the assurance he will not do it to India?

ʘ Trump’s continuous waffling on Indo-Pakistani relations, specifically his harrumphing on mediation in Kashmir, is an ominous red flag for Raisina Hill. There are no surprises for guessing who will do the mediation. The man shows disturbing indications of paranoia of the most uncontrolled variety.

ʘ The saffron forces in Nagpur and Delhi will be making a big mistake if they think that the Indian Diaspora in America is clearly on the side of Donald Duck. Most of the Indians in professional positions in universities and in Silicon Valley make no effort to hide their disdain for the man.

ʘ The Democrats do not, by any standards, have a squeaky-clean record in Indo-American relations. Nevertheless, it would be a gross mistake for South Block to neglect the Democrats in the next few months. One never knows what the composition of the next administration will be. Therefore, India must not burn its bridges with the Democrats. To allow the 7-11 shop owners and owners of motels to formulate New Delhi’s policies with the world’s only super-power would be folly of the highest order.

America is an extremely complicated animal by any standards. According to one of the jokes the French crack about the country that they helped to create, America is the greatest country in the United States. And then, of course, there is a wisecrack that will enable the State Department to deny you a visa for a few lifetimes: what’s the difference between the US and yogurt? If you leave yogurt alone for 300 years, it develops a culture. Are South Block and Nagpur listening?