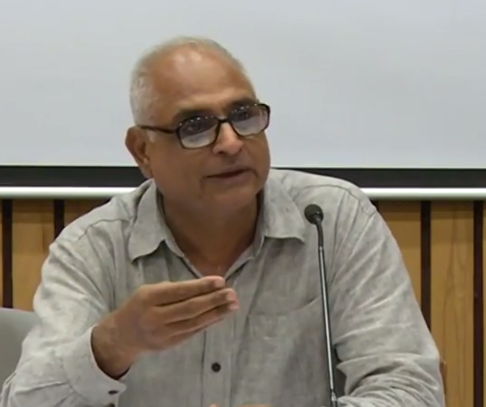 Dr. J.K. Bajaj: An eminent physicist, scholar, and perhaps India’s best known demographer. His pathbreaking work on Indian demographics is the volume entitled,  Religious Demography of India, a must read.

Dr. Anirban Ganguly: Director of the Syama Prasad Mookerjee Foundation and a scholar of the highest merit. He is an acknowledged expert on Sri Aurobindo and is also an IndiaFacts columnist.

Dr. Omendra Ratnu: A surgeon from Rajasthan and an activist working for the rescue and rehabilitation of Hindu refugees from Pakistan.

The following covers the key highlights of the proceedings of the seminar.

Opened with an alarming but very accurate observation that Hindus since the beginning of the last millennium have been so continuously persecuted that today, they don’t even realize that they are being persecuted. In his own words, “today, Hindus have stopped believing that they are being persecuted…persecution seems to be the natural state of Hindus.” As also the fact that the sheer physical numbers of Hindus have been worryingly declining since the end of the last century till now. He provided the demographic data to buttress this point.

Hindus have ceded their mind space and physical space to Abrahamic faiths, which have been continuously growing at the expense of Hindus.

The situation has worsened after Independence where the population of Hindus in Pakistan and Bangladesh have dwindled to absymal levels. This is not an issue for anyone because Hindus themselves don’t think it is persecution, so the rest of the world is similarly not bothered. This kind of situation is simply unimaginable with any community or religion anywhere in the world.

Importance of preserving the way and continuity of life and traditions in villages, jaatis, janajaatis, and even the Hindu family as an undivided unit.

With respect to the mental space, Romila Thapar and others who rewrote history textbooks…these books are designed to make a child hate himself/herself. In any other self-respecting country, the parents will go and burn the school if such kind of texts are taught. This is the mental persecution of the extreme kind. No wonder that at the end of the day, if our children pass out of say, IIT, they will immediately buy a ticket to the US because we have taught them that India is no place to be in.

We have to document data. More specifically, we have to develop our own corpus of Holocaust literature. We have been very bad at documentation: videos, audios, books, references etc. to make a case of Hindu persecution in the subcontinent.

Without documentation, our efforts to help Hindus in Pakistan and Bangladesh will amount to little.  The biggest opponents that prevent this from happening are the Indian media.

Conduct discussions and seminars like IndiaFacts is doing on based on such documentation.

Bring out an annual status of Hindus report. This status report should look at the condition of Hindus anywhere in the world.

Situation in West Bengal is precarious. Most persecuted Hindus from East Bengal turned Communists. They live in denial of the fact that they were unable to protect their physical and mental spaces and wanted to forget it.

Our history textbooks don’t even talk about Hindus as a persecuted and a challenged civilization. Unless we don’t tell our children this fact, the current state of affairs will continue.

Nobody uses the word “genocide” in connection with the persecution of Hindus as if nothing wrong has ever happened to Hindus. If we look at a time frame–say 50 years or even a 1000 years, we are a shrinking civilization. The strange part is that nobody calls this massive dwindling of Hindu population as genocide. No Amnesty International, no UN body calls it genocide.

2011 Census report has not even been published. When it is published, you will see the shrinking number of Hindus even within this country. Demographically, Hindus are being reduced alarmingly, district by district.

Hindu Munnani and other Hindu workers are being killed casually all over India but there is no proper recording of the fact.

There is a calculated plan to do away with certain civilizational groups: Hindus in this case.

The man on the street is motivated by self-interest  and not truth, however lofty the truth maybe.  Hindus must stop crying for being wronged and do something about it.

Every Hindu has to understand that his/her very survival is at stake. Only then will he/she be awakened out of this inertia.

Hindus can choose to continue being the sacrificial lambs for the Abrahamic faiths like the Jews did for so long. Or they can fall back on and take inspiration from the valorous sacrifices of Shivaji, Rana Pratap and others to regain our lost pride and spaces.

This is akin to war and in today’s times, it will be fought largely with the pen and therefore we need to create an ecosystem for right wing writers and thinkers.

We need to generate local Hindu leaders who can mix Dharmic traditions with aggressive onslaught on the ills of our own system and mount a counter to Abrahamic faiths effectively. We need to generate a whole tribe of such intellectual kshatriyas .

The complete video of the IndiaFacts seminar on the persecution of Hindus is embedded below.