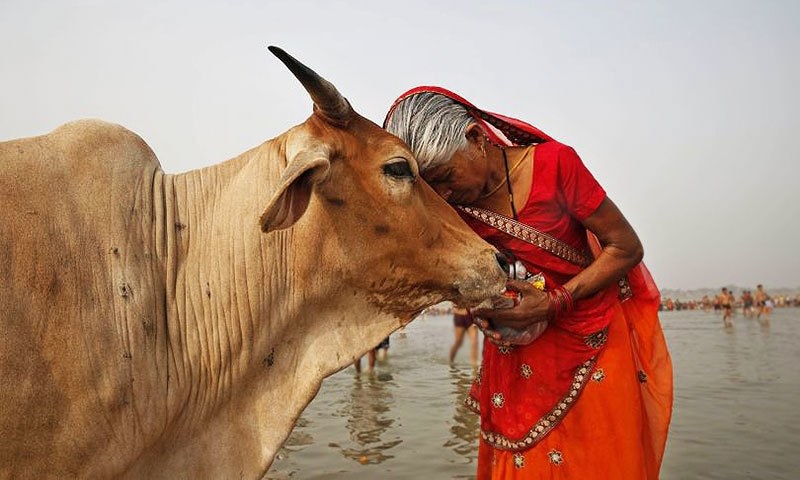 Cow-related violence and lynching have been making the media headlines world over in the recent past, especially since the now 4-year old Modi government of the Bhartiya Janata Party (BJP) took office in 2014. What we have seen and heard in such reportage is that a person (or persons) belonging to a minority community (Muslims) is lynched for the suspicion of being a cow thief or smuggler. However, when this recent news about the killing of sadhus (or holy men) broke out, it shifted the focus ever so cursorily, at least in the Indian English language media, to a different element of this cow issue. According to reports, these sadhus were killed for reporting cow smugglers to the local police administration.

Why Cows are Important

To understand this issue of cow, we need to dig a litter deeper on this issue. One of the earliest dictionary/ thesaurus type of meaning of cow is provided by Yaska. Yaska, the 9th century BCE (according to linguist and Indologist Prof. Kapil Kapoor) Sanskrit grammarian and etymologist, is known for his pioneering work of Nighantu and Nirukta. Nighantu is a compilation of a classified list of Vedic words. Nirukta, on the other hand, is considered the oldest Indian treatise on etymology, philology, and semantics. In Nirukta, (Chapter 2, section 5, translation by L Saroop) Yask describes the word gauh (cow) as a synonym of ‘earth’ because it goes very far. Yaska also mentions Vedic passages where the primary forms of gauh are used in a derivative sense, i.e., in the sense of milk (mix soma with milk). The Rig Veda (6.28.1-8), on the other hand, calls cows as ‘bringer of fortunes’. Other Indic texts describe cows as kamadhenu (one that fulfills wishes) and aghnya (the inviolable).

Cow has always been an important and integral part of the Indic civilization. From the domain of sacred to the more mundane daily rituals, the importance of cow is arguably incalculable. The doctrine of the sanctity of the cow is regarded as one of the dominant symbols representing the Indic culture. The Hindus place cows on a level higher than other animals and assign a glorified term go-mata (mother cow)

“… the cow is presented in the Vedic literature as the supreme symbol of femininity, fecundity, and maternalism and of a greater importance, perhaps, than even the bull. Prithvi, the earth and its personification as a goddess, is referred to as the divine cow, and it is held to be the mother of the gods; Aditi, the Vedic goddess of space who is also identified with the earth and with Nature is referred to in one passage as the Cosmic Cow; the cosmic waters released after Indra slays the demon Vrata, come forth lowing like cows; rain clouds are called cows. Surabhi, known aslo as Kamadhenu, is the wish-fulfilling Cow of Plenty, who symbolizes the abundance and proliferation of Nature, and thus represents both motherhood and regeneration. …. The frequent and persistent identification of the cow with various deities in the Vedas, especially in the context of sustenance and fertility in the universe, resulted, as W. Norman Brown argues in the word or words for cow becoming “… a symbol of the holiest of those entities…”

Beyond this sanctimonious nature, cows have also been important in the day-to-day as well as highly specialized rituals (yajnas) of the Hindus. Purity and precision has always been an important aspect of Hindu culture, including Hindu rituals. Several cow-related elements are part of such rituals for their perceived purity. Panchgavya, the five products of the cow – milk, yogurt, ghee (clarified butter), gomutra (urine), and gobar (dung) – is used in many rituals. Gobar is not only used in rituals, it is also used to clean houses on a daily basis in rural India even today. Frederick J Simoons, (in his article The purification role of “The Five Products of the Cow in Hinduism, Ecology of Food and Nutrition, 1974) mentions the use of diluted mixture of cow dung for purification of river water. Even cow dung ash is considered highly purifying. A Hindu sadhu smeared in cow dung ash is a common sight across the length and breadth of India. Such smearing is seen as identifying oneself with the mahayogi (the great Yogi) Shiva.

Similarly, cow urine is considered not just as purifying element but also a great healing agent. Simoon, in that same article also mentions that wherever gangajal is used, such as for purification of a well, urine from a cow may be substituted. The panchgavya is considered to have the purification capability comparable to those of fire and water from all holy rivers including Ganga. The mixture of cow dung and urine is also used as a cure-all for purification reasons.

The Atharva Veda provides a cure for removing tumor with cow urine. Maurice Bloomfield, while commenting on the relevant verse (6.57.1-3) provides the procedure for the application of go-mutra for curing tumor — “The practice consists of moistening the tumor with the foam of [cow’s] urine, throwing the urine itself upon it; next washing it off …”.

At the economic level, cows (cattle) have been important in agriculture. Evidences point to domestication of zebu (Bos indicus) cattle in the Indian sub-continent as early as 6,000 BCE. Numerous archaeological evidences, such as the bull on the seals and the figurines, suggest some familiarity in the least with these animals.

In light of the pre-eminence of cows in many aspects of Hindu life as well as the overall notion of ahimsa in the Indic civilization, the recent instances of cow-related disturbances demand a nuanced perspective. While on one hand such incidents point to the breakdown in Indian state’s law-and-order machinery, the problem at hand is more systemic than the recent ‘lynchistan’ narrative that has been given prominence in both domestic as well as international media.

The Politics of Cow

In India, the politics over cows is as old as politics itself. Gaveshti, was one of the common forms of wars for the inhabitants of the Indus-Saraswati valley region. However, the history of organized political movement against cow-slaughter in modern India can be traced back to almost 200 years ago. It was in 1818 when Swami Dayanand (a Hindu social reformer) set up ‘Go Krishyadi-Rakshini-Sabha’ as the “sporadic cases of violence had occurred since 1793 when the Hindus organized themselves in small groups to rescue cows from Muslims.” (S.M Batra, Cow and Cow-slaughter in India: religious, political, and social aspects, July 1981). Several other similar organizations such as ‘Prayag Mukhya Gorakshini Sabha’, ‘Allahabad Goraksha Samiti’, Beni Madho’s ‘Go Rakshini Sabha’, and ‘Allahabad People’s Association’ also sprung up with the purpose of mobilizing Hindus for the protection of cows. Prominent Independence Movement leaders like Bal Gangadhar Tilak made emotional speeches in support of ban on cow-slaughter. In a speech in 1893, Tilak said: ‘The cow … is taken daily to the slaughter house and is butchered mercilessly by the unbelievers. How can I bear the heart-rending spectacle? Have all our leaders become helpless figures on the chessboard? (SM Batra)

It is indeed true that, as opposed to Hindus’ veneration of cows, Indian Muslims and Christians eat cow flesh. However, it will be wrong to assume that eating cow flesh is a marker as well as proof of identity for these two religious groups. Tufail Ahmad, a prominent Muslim political commentator in his now famous article “India’s Thought Cops are Angry with Modi” writes: “Cows are not slaughtered across the Islamic world, but the reason cows are slaughtered mostly in the Indian subcontinent is because Indian Islamists introduced the practice of cow slaughter here as a challenge to Hindu religious practice of worshipping cows.”

Notwithstanding the constitutional provision (Directive Principles of State Policy, Article 48 of the Constitution of India which states that “The State shall endeavor to organize agriculture and animal husbandry on modern and scientific lines and shall, in particular, take steps for preserving and improving the breeds, and prohibiting the slaughter, of cows and calves and other milch and draught cattle.”), violence related to cow, legal and illegal cow slaughter, cow stealing and trafficking is not a post-2014 phenomena in India as it is made out to be. Local level cow-protection movements are fairly common in India. The 1966 movement against cow slaughter, however, was significant in terms of mass mobilization.

There is a need to see such protests and disturbances in a more nuanced manner. India’s culture as well as agriculture and economy have been cow-centric for several thousand years. Industrialization of agriculture and the breaking down temple culture/economy due to both State control of Hindu temples as well as changes in the socio-cultural attitude as a result of left-dominated secular education system post-independence are responsible for the current poor condition of the cows. The dwindling numbers of temple-managed gaushalas (cow shelters) that were fairly common in the past, add to the complexity of the situation.

Cow in India has been a deeply religious symbol since antiquity. Many leftist and ‘secular’ scholars and commentators, however, have tried to deny the pre-eminent role of cows in Indic civilization by selectively quoting the scriptures and by narrow, faulty, and opportunistic interpretation of the Indic texts. Though there are several other explanations such as economic, medicinal, and environmental, have been provided for the role of cows in India culture, they all appear diminutive in front of its overall religious context. Many scholars of religion consider the domain of sacred as sui generis and as such reducing it to categories of mundane social behavior is doing injustice to the cause. Additionally, we are also getting aware of the role of cows in other societies. A recent NPR news report points to the role of cows in South Sudan’s civil war. Similarly, Rwanda’s ‘GIRINKA’ (One Cow per Poor Family) program helps reduce child malnutrition and increases household incomes of poor farmers.