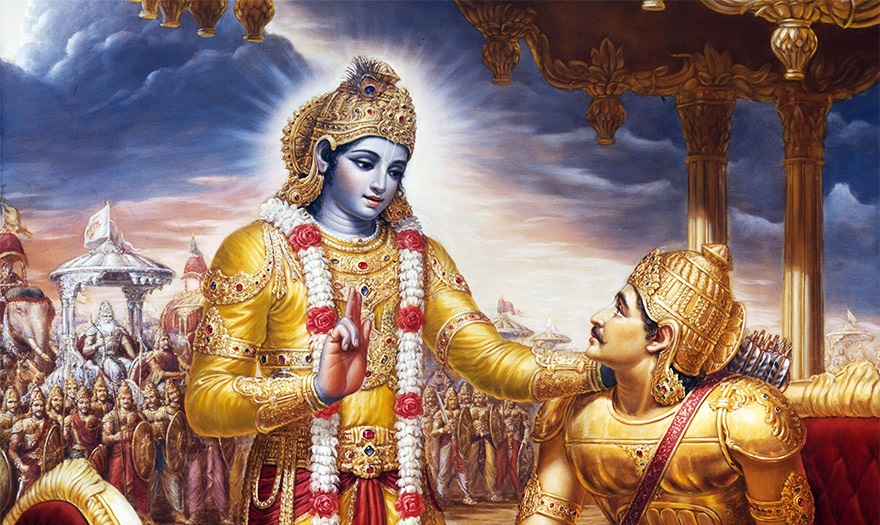 The Bhagavad Gita is arguably the most revered text in the Hindu religious tradition. It is almost universally regarded as one of the three canonical works of Hindu philosophy (Prasthanatrayi) with the other two being Badarayana’s Brahma Sutras and the thirteen Mukhya Upanishads.

These three works have had a central role in both the later development of orthodox Hindu philosophy as well as the formation of Hindu sects. It is often stated that there can be no new sect founded in India that does not begin with a fresh take on Brahma Sutras and the Gita.

That’s not an exaggerated statement. The three major acharyas of the early middle ages – Sankara, Ramanuja and Madhwa – all wrote commentaries (Bhashyas in Indian parlance) on both the Bhagavad Gita and the Brahma Sutras.

Sankara (788 – 820 CE) is arguably the most famous among all the commentators on the Prasthana-trayi texts. He is widely regarded as a key figure in the history of Hindu thought – someone who was instrumental in helping establish the primacy of Vedanta among all the Hindu Darshanas, as well as in consolidating the doctrine of non-dualism (Advaita) that preceded him.

Ramanuja (1017 – 1137 CE) emerged a couple of centuries after Sankara’s death. Like Sankara he commented extensively on both the Brahma Sutras and the Gita, albeit with a philosophical lens that differed markedly from Sankara’s. Unlike Sankara, his interpretation of the texts critiqued the strictly monistic views of Sankara, and was more strongly rooted in Vaishnava Bhakti.

Now why is studying the Bhashyakaars important? It is both important and relevant because it helps us understand that the sectarian diversity which exists among Hindus is not merely an outcome of pettiness or clannishness as often supposed, but is rooted in deep philosophical convictions that have been sincerely held by the followers of each acharya for close to a millennium.

In this essay let us look at the Bhagavad Gita and examine how radically different the interpretations of it could be by considering a single verse – Shloka no 8 from Chapter 4 – and studying Sankara and Ramanuja’s commentary on the same.

Here’s the verse in question –

This is one of the most theologically significant shlokas in all of Vedantic literature. It is a verse that occurs in two different places in the great Itihaasa text Mahabharata. It features in Chapter 4 of the Gita (Shloka 8) as mentioned above. But it also features towards the end of the Vishnu Sahasranama (Book 13 of MB) where it follows the chanting of the 1000 names of Vishnu

Here’s a literal translation of the verse –

“In order to deliver the pious and to annihilate the miscreants, as well as to reestablish the principles of Dharma, I advent Myself yuga after yuga”

Now why is this such an important shloka? Because it is arguably the only shloka in the Gita where the Bhagavan explicitly lays out the reasons why he finds it necessary to advent on earth time and again. It is a strongly theistic verse.

It is also a shloka that offers the Hindu solution to the “Problem of Evil”. This verse clearly posits that Bhagavan is concerned with the existence of evil and he incarnates with the object of ensuring the prevalence of Dharma and deliverance for devotees.

In a world where the theory of Karma (as propounded by Bhishma in Shanti Parva) prevails to perfection, the need for theism would be lower – Good Karma will lead to good outcomes. Bad Karma to bad outcomes. The world is inherently just and sustained mainly by Karma.

However Krishna, while acknowledging the importance of Karma, also appreciates that outcomes can be unfavorable in defiance of Karma. There is a certain element of randomness, which explains the universality of Adharma, as well as suffering of devotees. Hence the need for a theistic intervention to ensure the prevalence of justice. In effect the incarnation of God is a solution to the Problem of Evil, on a periodic basis.

So how do the great Bhashyakaars – Sankara and Ramanuja – treat this shloka. Let’s study the same. Here’s Sankara’s commentary on this verse –

Translation: “For the all-round protection of the “sadhu” i.e “those who tread the path of morality”, for the destruction of the sinners, and for the secure establishment of dharma I appear in every age”

Now what is striking about Sankara’s commentary for this particular shloka is that it is very brief. He does not expand a lot but adds a few qualifying remarks E.g.: To explain “sadhu” he adds “those who tread the path of morality” (“Sanmargasthaanam” – is the word he uses). Also to explain “dushkruta” (miscreants), he chooses to call them sinners with the word – “Paapakaarinaam”.

So Sankara being a monist is not explicitly defining “sadhu” as a devotee. Instead he interprets the shloka through the lens of Karma. “Sadhu” are more broadly associated with men who practice virtue and who tread the right path while the “dushtas” are individuals who have engaged in sin (“paapakaari”). Krishna’s advent on earth is intended with the object of defending the virtuous and destroying the prevalence of sin.

Now let’s turn to the Bhashya of Ramanuja on the same shloka which makes an interesting contrast!

Translation: “The ‘good’ are those who follow the [Vedic] Dharma, as defined above. They are the foremost among the Vaiṣhṇavas, who have taken refuge in Me. While My name, pastimes and form are beyond the scope of speech and thought, these devotees cannot support or sustain themselves without My beatific vision. They regard even a moment of separation from Me as a thousand aeons. They become physically and psychologically dejected because of their separation from Me. So I take birth from age to age in the forms of gods, humans etc., in order to cherish them by giving them the opportunity to see Me and to experience My pastimes and to converse with Me. I take birth also for the destruction of those who are hostile to such devotees and also for the restoration of the declining Vedic Dharma, which consists of devotion to Me. The main purpose of the incarnation is to reveal the adorable [divine] form in order to foster devotion. The destruction of the wicked is a secondary purpose. There is no specific restriction of Yugas like Kṛta, Treta etc., for the appearance of Divine Incarnations.”

So the first thing that strikes us is that Ramanuja provides a much longer bhashya for this particular verse than Sankara. Being a very strong theist and a proponent of “Saguna Brahman” he sees in this shloka the opportunity to emphasize the need for Vaishnava Bhakti – a need not seen by Sankara at all!

Ramanuja emphasizes the grace of lord. Also he clearly associates “sadhu” with the devotees who take refuge in Bhagavan. Unlike Sankara who sees “sadhu” as being virtuous (people treading the right path).

Ramanuja also sees “the destruction of the Dushtas” not so much as Karmic justice, but as a means to enable them to see his divine form and realize unity with the divine. Reincarnation here is not just the means of ensuring the prevalence of Dharma, but also the means of providing the grace of god for both “sadhus” and “dushtas”

This is a classic example of how the two great acharyas of the Vedanta tradition have interpreted this theologically significant verse in their idiosyncratic ways. Both Sankara’s elegant understatement as well as Ramanuja’s deeply felt devotion-suffused commentary reflect their unique philosophical conception.

It is also a testament to the greatness of the Gita that even a verse that sounds very unequivocal and straightforward on the surface has been interpreted in massively different ways by the great Acharyas in the Hindu tradition.

The different ideological conceptions of the Acharyas have, over centuries, given rise to different theological sects and communities. While there is a tendency in our times to bemoan sectarian differences as a “negative” there is a case to be made for the celebration of differences as they are indicative of the vibrant intellectual culture in the land where sects still preserve the vision and the ideological distinctiveness of their respective founders.