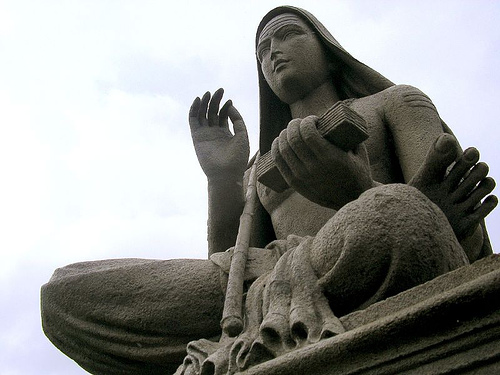 Adi Shankaracharya is one of the most outstanding personalities that India has produced in last few thousand years. He was a teacher, scholar, poet, saint, philosopher, yogi, bhakta, tantrika, a jivanmukta, and an avatara (incarnation).

He taught people both pravritti (actions) and nivritti (renunciation), both Dharma and Moksha and showed how to travel from former to the latter. In many a sense he was truly a Jagadguru- World Teacher, who went to great lengths to teach and re-establish Sanatana Dharma across India.

Today, on the occasion of Shankara Jayanti- the birth anniversary of the great master, let’s briefly look into some of his teachings as imparted in his small composition- Sadhana Panchakam.

Hence, one can say that there is a kind of limitation on the part of any Acharya to impart direct instructions to people while writing commentaries. To overcome this limitation, various Acharyas have written independent works called ‘Prakarana Granthas’, where relevant teachings extracted from the scriptures are directly imparted to the students. One such small Prakarana Grantha written by Adi Shankaracharya is ‘Sadhana Panchakam’.

As the name denotes, Sadhana Panchakam is a text consisting of five stanzas imparting teachings related to how a person must perform Sadhana (spiritual effort) in order to attain the highest goal of Moksha. Let us briefly look into five important lessons that Adi Shankaracharya teaches, which, when practiced will help an individual to travel towards Moksha.

The very first teachings imparted by the great master is- ‘vedo nityamadhīyatāṁ taduditaṁ karma svanuṣṭhīyatāṁ’ meaning one should engage in the study of Vedas and practice the duties prescribed in it. It may be easily asked, why is the study of Vedas so important?

Before answering the question, it is important to note that the term Veda here not only refer to the core Vedic texts of the Samhitas, Brahmanas, Aranyakas, and the Upanishads, but also to various texts like Itihasa, Purana, Dharmashastra, Smritis, etc. which derive their teachings from the core Vedic texts. Hence, the great master is advising people to pick up any text, be it Upanishads, Gita, Mahabharata, or Puranas, that one feels relevant to his/her life, and study them and then imbibe those teachings and practice them in one’s life.

To the question, why study them, it is answered that just as one studies physics to know about the physical aspect of the Universe, similarly one must study the Shastras (scriptures) to learn about one’s identity, duties, and purpose of life. In other words, the scriptures are the ultimate Pramana (source of knowledge) regarding Dharma (righteous duties) and Moksha (liberation) and they prescribe a wide range of duties to people based on their age, gender, class, station, and inner inclinations.

The performance of these duties, will in-turn help the performer attain purification of the mind (chitta-shuddhi) and overall wellbeing. Thus, Adi Shankaracharya is advising people to study the scriptures, or listen to their teachings from a Guru and understand one’s Svadharma (personal duty) in life and practice it. This attainment of the purification of the mind through the performance of Svadharma forms the very first step towards Moksha.

After advising people to study Shastras and practice Svadharma accordingly, Adi Shankaracharya advises people to practice devotion. Adi Shankara elsewhere says that Bhakti is the most important ingredient for Moksha and defines Bhakti as abiding in one’s own real nature i.e. one’s own Atman.

In other words, a person having an intense longing for Moksha, should  perceive the fact that Brahman, who is the lord of the Universe and is of the nature Sat-Chit-Ananta (Existence- Knowledge-Infinity) also exists as one’s innermost Self-Atman and one should then practice devotion towards this Brahman who exists in one’s Hrdaya (heart) through various means of Upasana (worship).

Only when a person continuously performs such a worship, will he/she be able to attain one-pointed concentration (Ekagra-chitta) and Samarpana Bhava (feeling of surrendering). Thus, cultivation of devotion is very important for attaining Moksha.

Adi Shankara then advises people to give up desires and cleanse the stream of Paapam (demerits) attained due to past performance of Adharma. Desire is the root of all demerits and bondage. One is entangled in the cycle of birth and death, because of the unending desires to experience worldly pleasure.

Hence, as long as one remains attached to desires, one will keep performing Adharmic actions and will remain attached to worldly bondage. Only when one overcomes desires and develops Vairagyam- dispassion towards worldly enjoyment, will one be able to pursue his goal of Moksha without any distractions. Thus, the great master advises people to give up desires.

Another important quality that is crucial to attain Moksha is restraint of the senses and the mind. It is the nature of the mind and the sensory organs to grasp worldly experiences and gratifying those experiences will only increase attachment to worldly objects. Thus, indulgence in both pleasure and pain, both happiness and sorrow increases bondage to physical existence.

People often identify themselves with their name, their possessions, and their body and mind. But, all of these are impermanent and only the innermost Atman, which is non-different from Brahman is permanent. Moksha or liberation is nothing but the first hand direct realization that one is not the body and mind, but is Infinite ever-free Brahman itself.

Therefore, to attain this Moksha through direct realization (i.e. Aparoksha Jnana/Atma Jnana), one must overcome the notion that ‘I am body’, ‘I am name’, or ‘I am the mind’. And this is only possible when a person has purified his mind, given up desires, and has restrained his mind and senses. This renunciation of the notion ‘I am body’ forms Sannyasa in the true sense and it directly leads one to abide in his innermost Atman and attain Moksha.

Thus, Adi Shankaracharya teaches in Sadhana Panchakam that the practice of Svadharma, Bhakti, Vairagyam, Indriya Nigraha, and Sannyasa will slowly lead a person towards Atma-Jnana and Moksha.

For the interested, here is the full text of Sadhana Panchakam and a free translation of it into English by Swami Tyagananda.

1. Study spiritual texts (“Vedas”) regularly and put into practice their teachings. Worship the Divine in that manner and give up the thought of desires. Wash away the negative habit-energy and examine the defects of worldly excitement. Hold on to the awareness of the Atman and leave at once your own limited identity.

2. Remain in the company of the holy (thoughts, words, deeds; books, music, art; people) and strengthen your devotion to God. Cultivate the qualities such as self-restraint and give up all work prompted by selfish desire. Approach those who are wise and holy, and serve them. Seek only the Imperishable Being (“God”) and hear the words of the scripture.

3. Reflect over the meaning of the scripture and take refuge in its perspective. Keep away from vain arguments and follow the reasoning of the scripture. Always be aware that you are Brahman and completely give up all egoism. Eliminate the thought of “I” connected with the body and don’t argue with the wise ones.

4. Through the daily medicine of alms, treat the disease of hunger. Don’t hanker after delicious food; be contented with whatever comes of its own. Forbear the polarities such as cold and heat and do not utter useless words. Do not expect kindness from others and abandon all harshness toward others.

5. Live happily in solitude and focus the mind on the God. See carefully the infinite Self and notice how it eliminates this fleeting existence called the world. Through the power of consciousness, dissolve your past karma, remain unaffected by your later karma, and experience your present karma. In this way, remain established in the awareness of the Supreme Self.