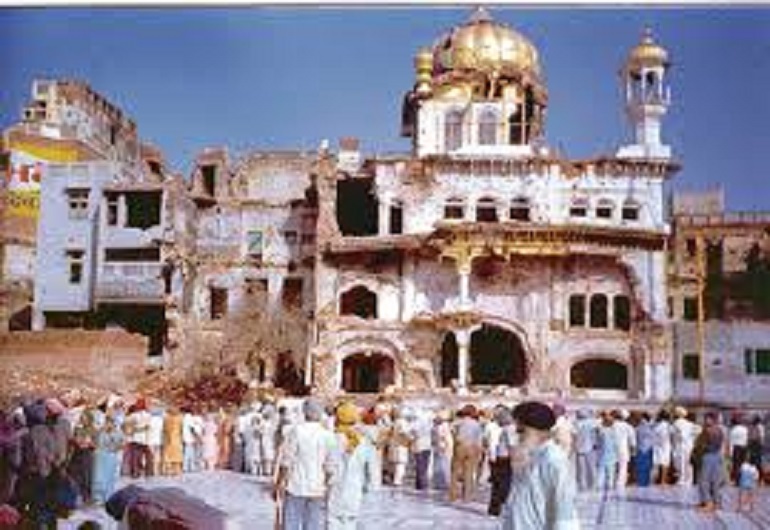 Certain tragedies that befell our country are very difficult to forget; one such incident was the controversial and destructive ‘Operation Bluestar’ – a military operation in 1984 – to flush out Sikh militants led by Jarnail Singh Bhindranwale from the Golden Temple in Amritsar and secure the sacred seat of worship of the Sikhs. Unfortunately several innocent civilians also fell victim to the operation, and massive damage was done to the sacred site. Now it has been established by political pundits that the militancy of Bhindrawale was the prime reason for the operation to be authorised, Bhindrawale being propped up by the then Congress party chief and India’s Prime Minister Indira Gandhi.

Yet we often hear many scholars stating that the militancy was the end product of years of Sikh anger towards Hindus. Many would say regardless of certain differences, Sikhs and Hindus have co-existed in Punjab without much friction, so why the anger? Below we give a summarised background of this rather sensitive and controversial issue:

i. Arya Samaj-Sikh hostility: It began in 1877 with the arrival of the Arya Samaj founder Swami Dayanand Saraswati in Punjab where he opened a branch in Lahore.  Around the same time, he initiated his shudhi (purification) movement to bring converts back into the Hindu fold. In the begining the Arya Samajis identified Sikhism as a reform movement which had sought to create a purified Hinduism devoid of superstitions. Young educated Sikhs like Bhai Jawahir Singh worked closely with Swami Dayanand during his tour of Punjab, serving as the Secretary of the Lahore Arya Samaj from its inception. Throughout the early 1880’s, young and learned Sikh leaders often stressed on the similarities between Sikhism and Arya Samaj. One such leader Bhai Basant Singh, in a lecture delivered before a Sikh audience in Gujranwala on September 4, I887, stated that

It is unclear what transpired, but over time, Swami Dayananda Saraswati changed his stance on Sikhism and began to call Guru Nanak a dambhi (hypocrite) and the Granth Sahib as a book of derivative importance.

Following that insult, his Sikh followers and others in the community retaliated by setting up Singh Sabhas to thwart the Arya Samaj’s influence.  In this sad encounter, both sides received the blessings of the British government in different ways. A host of books on Sikhism were published in Gurmukhi and English including the definitive six volumes by M.A. Macauliffe, The Sikh Religion. Also included was Kahan Singh’s booklet, Ham Hindu Nahi Hain, ‘We are not Hindus’.

Increasingly, the Arya Samajis pushed Sikhism faraway from Hinduism and little was done to reverse this process. The damage was done, and the divisions hardened over time. To end the tensions famed Hindu nationalist leaders like Sir Gokul Chand Narang termed Sikhism as higher form of Hinduism but it was of no use.

The Sikh Gurdwara Act of 1925, which passed the control of Sikh temples to an elected body called the Shiromani Gurdwara Prabandhak Committee (SGPC) defined a Sikh as one who believed in the ten gurus and the Granth Sahib and did not believe in any other religion.It was this act which altered the flexible social relations between Sikhs and Hindus.

ii.Linguistic hostility: Post-independence the plan to organise states based on linguistic divisions became the point of serious debates. One nsuch debate was a controversy in Punjab in the name of Punjabi Suba. The Arya Samaj had called upon the Punjabi speaking Hindus, other than Sikhs to claim Hindi as their mother tongue. The Arya Samajis claimed that the demand for a Punjabi speaking state is a religious demand since Sikhs are the sole speakers of Punjabi.  This flawed claim received support from certain elements of both the Congress party and the Jana Sangh.  That was the reason used by a significant section of the Sikh leadership to propagate false rumours that Punjab and Sikhism will lose its individual essence under the Hindus of India.

In case of political hostilities we hear different analysis from different scholars, but these social tensions are unanimously accepted as contributing factors to the militancy in Punjab. Mentioning them is not to fester old wounds but to help us introspect our own follies, in order to avoid their repetition. As philosopher George Santayana reminded us, ‘Those who cannot remember the past are condemned to repeat it. ‘