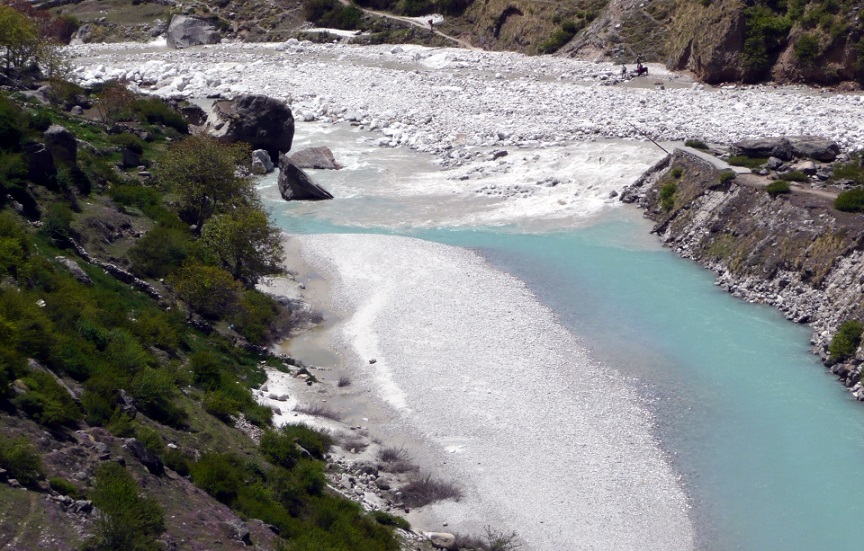 But a library shelf filled with contemporary geographical and historical research about the Sindhu-Saraswati [aka] Harappan [aka] IVC has been right under his nose for twenty-five years!

In the 17 April edition of The Hindu, a sarcastically penned article, printed prominently at the top of the page in the Opinion-Comment section, titled “Searching for Saraswati”, was written by the renowned historian, Professor Irfan Habib.

The attached cartoon reminded me of an article I wrote in 2003, titled “Ostriches and Archaeologists”, which discussed the long-standing disputes between a vocal group of Indian historians (formally self-identified as Marxist historians, but since the fall of the USSR, now calling themselves ‘progressives’) versus the Archaeological Survey of India (aka: mainstream Indian archaeologists).

My humorous title, “Ostriches and Archaeologists” reflected the absurdity that archaeologists are digging in the earth to discover historical artifacts, while this group of historians, colleagues of Professor Habib, have their heads buried in the sand refusing to look at the emerging evidence regarding the discovery of the paleo-geographic river bed of the long-dried up Saraswati River, as well condemning as other pre-modern (aka: Medieval) archaeological excavations.

In 2003, I vetted a copy of that article, “Ostriches and Archaeologists” to Professor B. B. Lal, who is often referred to as the father of Indian archaeology. Months later, I visited him at his home and his son who is a pilot and an officer in the Indian air force said to me that he hadn’t realized that his father, an octogenarian scholar, was a revolutionary. I replied with the famous quote, that in times of deceit and cover-up, telling the truth is a revolutionary act.[1]

In my research regarding India’s Social Sciences a dozen years ago, under the heading “Historiography in the Headlines” I noted that there was a vocal group of historians in India, who for decades have used the mainstream media to further their causes, while consistently refusing to look at archaeological evidence. Irfan Habib was among the usual signatories who critiqued not only archaeologists, but their material finds as well.  Even the artifacts were condemned as communal and saffron, if they incidentally lent credence to the ancientness of Dharmic traditions.

Artifacts are not saffron unless they were buried in ochre colored soil for a few thousand years. Facts are not Saffron, unless you are afraid of them and hope to sarcastically trivialize the emerging data, which Habib does like a seasoned pro. Using the reducto ad absurdumfallacy to reduce the argument to the absurd, converting an intellectual debate into a lopsided political one and avoiding the facts by ridiculing the supposed ‘intention’ and source of the data, Professor Habib’s critique was mostly political with very few historical considerations.

Instead of talking about merits of the case his strategy was to be distracted by side issues, bringing up controversies then changing the topic, and by sleight of word, Habib uses a bait and switch methodology to avoid the real issues at hand.

For reasons tied up with ideological predispositions, there is a group of very vocal historians in India who have staked their professional careers against the research emerging from IVC sites in western India.  These professors fight pitched battles in the media and on the Internet to oppose the very existence, much less the evolving nomenclature of the Sindhu-Saraswati culture. Yet, strangely, despite being supposedly objective academicians, they are operating in complete denial of archaeological and other contemporary scientific data. For some strange reasons that are very detrimental to India’s social sciences, these historians’ minds are closed to dispassionate examination of contemporary historiographical research.

I was professionally embarrassed for Irfan Habib regarding his lack of scholarly research, when thirteen years ago, he made this uniformed comment, “It matters little that the ‘mighty Sarasvati’ supposedly flowing down to the sea through the Desert is a sheer figment of the imagination with no support from geography or geology.” (Outlook February 13, 2002.)  Back then, I wrote: ‘these are very strong words for a respected historian to use when there is overwhelming documented scientific evidence that a huge river did flow in that part of western India 3800 years ago.’

More than a decade ago, being thus astonished, I commented that ‘perhaps Professor Habib can be excused for not being up to date in paleo-geology and satellite imaging, or even contemporary research on ancient Indian geographical history, since his specialty is Medieval India, but it is surprising that, being thusly uninformed, he has taken such a strong stand.’

You can well imagine how surprised I am when I witness, more than thirteen years later that Professor Habib has still not updated himself professionally. Yet ironically, he continues to use his valuable time to write op-ed pieces in the popular press condemning his archaeological ‘others’… a sad testament to the sorry state of social sciences and historiography in India.  After reading a random news report about some local water reclamation project in Haryana, Habib based his supposedly academically informed critique entirely on that scant bit of yellow journalism, and due to the dreaded saffron dominance in Haryana, Habib is overtly political in his critique. Facts be damned!

The only professional study to which Habib refers in this article is from the eighties. Whereas in the last thirty years there have been scores of scientifically sound research projects including paleo-geological studies (with chemical analyses of soil samples), geographical studies, climatic studies, satellite imagery and landstat photography, isotope analyses, dozens of excavations by Indian and non-Indian archaeologists that support the hypothesis that there is a dried up riverbed of a great river that ran approximately where the seasonal rivers Ghaggar-Hakra now flow, as can be seen in satellite images. It ran down and around, heading in a southwesterly direction, wandering as rivers do over the millennia, from where it gained strength fed by other rivers, between the Yamuna and Sutlej, just where the ancient Hindu scriptures tell us this river used to run, and as Habib finally concedes in the last two paragraphs of his paper.

Contrary to Habib’s claim in The Hindu, the Saraswati didn’t emerge from a ditch in Haryana, but as actually mentioned in the article upon which he based his critique, and in countless other documentations, the Saraswati originated in the Himalayas, where it emerged from the “foothills of the Shivaliks in the AdiBadri area” which is between Dharmasala and Simla. Hardly a “nullah” in Haryana!

In fact, recent research of soil samples in the Rann of Kutch and where the Saraswati emptied into the Arabian Sea have found Himalayan sand particles, particular to Uttaranchal in the sedimentary composition. These tests were conducted years after the 1980’s era study cited by Habib in The Hindu.

In Habib’s characterization, he sarcastically suggested the BJP government in Haryana should dig ‘two or three tube wells … to create an official spring.” Habib is confused as to the course of the ancient river. He should actually know this bit of geographic knowledge since he is an Indian historian who continually writes about this issue in the media!  He knows well that the Saraswati ran between the Yamuna and Sutlej as mentioned prominently in the Vedas and other historical Sanskrit texts and has can be seen on a modern Landstat map.

I urge Professor Habib to visit the area before he condemns it again. He may also see, like the senior geomorphologist at the Central Arid Zone Research Institute, what seems like “a miracle in the Thar desert”! Or maybe it is just an ancient dried up river that still exists in some capacity below ground. Professor Habib may remember that after the dreadful earthquake in Bhuj in 2001, a spring opened up in the desert and clear fresh water flowed for days. There are many such stories across that broad area, from decade to decade, that report the emergence of a spring even after a mild earthquake.

But Professor Habib mocks the whole issue and dismisses the arguments and lumps all the informed and involved scholars into some kind of saffron stew that need not be heeded by the readers of The Hindu. He also seemingly dismisses satellite photography. No wonder for the last five millennia, Hindus thought that the Saraswati River must be mythical since they couldn’t find it on a map. Through the centuries, the popular lore considered that this non-existent, mythical Saraswati River, praised so prominently in the Rg Veda must be an underground river and it was presumed to meet the Ganga and the Yamuna at Prayag, in Professor Habib’s backyard. That old myth of an underground Saraswati has been demolished by contemporary research. A Times News article on June 15, 2002, stated that Habib, who “has written extensively on Saraswati, feels the exercise is a ‘waste of money’.” Then why, decade after decade, does Professor Habib continue to sensationalize the Saraswati and keep on writing ‘historiography in the headlines’ harping on a topic he refuses to research?

Near to the end of his editorial comments in The Hindu, Habib cited Heinrich Zimmer for advocating the concept that the Saraswati is not an independent river but actually another name for the Indus. Heinrich Zimmer, whose excellent books on Indian art were published posthumously by Joseph Campbell passed away in 1943, decades before either the paleo-geological studies or satellite photography revealed the existence of the Saraswati River. [2]

To conclude his tirade directed towards researchers excavating along the banks of the Saraswati River, Professor Habib knowledgably cites the verses in the Rig Veda where the Saraswati is mentioned and other relevant Sanskrit texts, such as the Panchavimsha Brahmana and the Manusmriti, where “Brahmavarta corresponds exactly to Haryana.”

In his final, strangely-worded sentence Habib writes, “From ancient tradition itself we thus have a depiction of the Saraswati that mocks neither geography nor history.” If that is true, why then did Professor Habib write an entire article that mocks the scientists researching the Saraswati River? Why, then, after all these decades didn’t he do his research? He would know that no scholars are trying to ‘stretch’ the Saraswati to pass below Allahabad. Obviously, purposes other than those of reason and common sense are at work guiding Irfan Habib’s perspectives.

[2] Myths and Symbols in Indian Art and Civilization. By Heinrich Zimmer. Edited by Joseph Campbell. (1946)