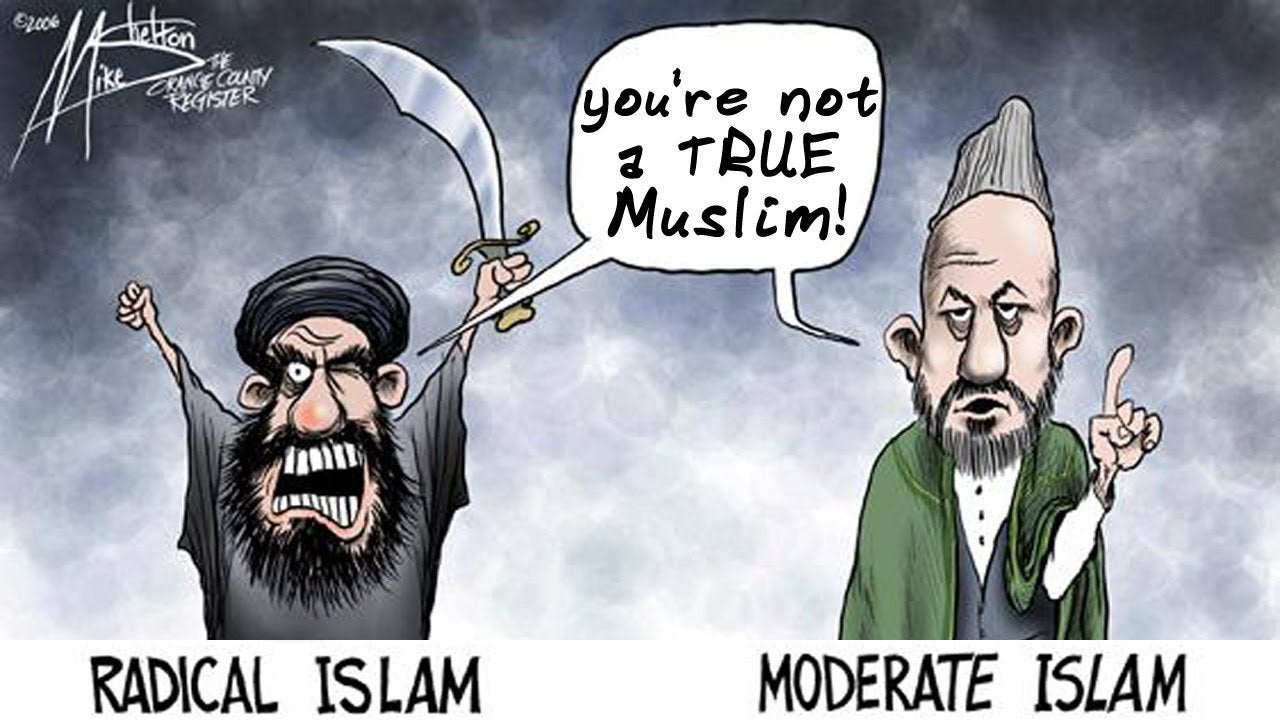 In a civilized society, if someone commits a terror act, other members of his community should denounce it. But Islamic dogmas provide the doctrinal motive for such acts and consider nothing un-Islamic or unethical about what they do.

Upon a careful perusal of many passages from Quran (For example verse 47.4, “When You Meet Those, Who Disbelieve, Smite Them at Their Necks“), it becomes apparent that Islamic ideology rationalizes terrorism which is further evidenced when thousands gather at the funeral of terrorists.

On the contrary, they use takfir, the concept in which one Muslim declares another, a non-believer or a Kafir, if one dares to reject the Islamic ideologies.

The process does not need to be a formal declaration as the doctrinal motives are so strong that even a seemingly benign suggestion can leave the fanatics feeling anxious and profoundly threatened. For instance, Irrfan Khan, who was an incredible actor, and a very genuine and grounded human being was reviled and considered an outcast by his coreligionists because he called for self-introspection to replace the blind Islamic practices.

Questioning the archaic Islamic ritual where millions of animals are slaughtered en masse, Irrfan had said, “The meaning of Qurbani is to sacrifice something which is close to you instead of any goat or sheep which you just buy to sacrifice”.

He had also condemned fasting, “Rather than fasting during Ramzan, people should self-introspect”.

Criticizing the processions which cause public nuisance he once said, “We Muslims have also made a mockery of Muharram. It is meant for mourning and what we do? Take out (tajiya) processions.”

In recent history, he was the only Muslim actor in Bollywood who also openly criticized his co-religionists for not speaking against terrorism.

As expected, reacting to his comments, Muslim clerics constantly counter-attacked and asked him to focus on his film career as he had no knowledge` about Islam.

But Irrfan continued to hold on to his stand, defending his criticism, “Doubt is a useful thing, it keeps your faith alive. unless and until you test, your faith is not alive. I test my teachings and experience myself. That’s how you work on your soul”. And he truly lived life with such philosophical insights.

However, even after his death, the attacks from religious fanatics continue.

Unfortunately, for the last more than 1000 years, Hindu civilization has also been in a perpetual war with the same religious ideology.

But is that the whole problem or just the tip of the iceberg? The trouble is also internal because the naïve amongst us tend to believe that persons like Irrfan who have been denounced by their fellow Muslims are the “Sacha Musalman” (“true Muslims”) representing “true Islam”.

There is no doubt that he was an awesome human being and a master at his craft. He had an incredible ability to get the audience relate to the characters he played becoming emotionally synchronized with the character. Whatever roles he played, he convinced the audience of the trials and tribulations of his character.

This coupled with his criticism of archaic Islamic practices, it is not surprising that there is genuine outpouring of grief amongst Hindus on the passing of Irrfan.

Shining a spotlight on and lauding people like Irrfan is equally important while simultaneously keeping focus on the problem. None of this, however, is what makes him a “true Muslim” especially when his own community does not even consider him a Muslim. And are these claims substantiated based on Koran or Hadiths?

In fact, Irfan was explicit in denying the Islamic ideologies and also stated that he should not be judged by his religion and acts of his ancestors. But gullible Hindus have their own interpretations of Islam, believing in its pluralist nature and thus oxymoronic notions like “Sacha Musalman“.

However well-intentioned, such notions only create a fallacy that “true individuals” can exist within the current framework and structure of Islam and thus nothing wrong with the Islamic dogmas that provide the doctrinal motive for jihad and terrorism. According to them, extremists have just distorted the actual Islamic doctrines. Even if it is assumed that there could be multiple interpretations of Islam, citing of the exact quotes from their texts by the terrorists while committing the acts of terrorism flies in the face of the peaceful version of Islam.

Such entitlements are of course partly conditioned by the Bollywood “Sacha Musalman” clichés flouting around for almost 100 years which perpetuated these notions with good-hearted Muslim characters, even if the plot did not demand it and when coupled with dialogues like “Ek Sacha Musalman aisa kabhi nahi kar sakta” (A true Muslim can never do this) & “Ek Sacha Musalman apne Iman ke liye Jaan de sakta hai” (a true Muslim will die for his honesty and integrity), such narratives left no doubt about the existence of “true Muslims”. Nothing much can be expected from people when their source of information is limited to movies.

Additionally, sometimes they get influenced because Karim, their neighbour or a classmate, is a good-natured person & hence a “Sacha Musalman” and therefore concluding that there could be nothing wrong with the Islamic teachings.

Fallacious arguments “Kattar to sab religions mein hote hain” (fanatics are there in all religions) are not uncommon. Not realizing that on the other side of the fence, if extremists or fanatics do exist, could just be a retaliatory response based on personal experiences which obviously cannot last much longer as there is no doctrinal motive which sanctions such violence. Additionally, Hinduism teaches to apply Vivek and Buddhi along with fighting the Adharmic forces.

However, Islamic extremism is based on written religious texts which is in existence for 1400 years and no one knows how long it is going to last as it can not be challenged or changed.

A pragmatic approach would thus be to honestly accept that extremist interpretations of Islam are valid. Furthermore, there are dangerous verses based on which people are willing to die or kill. And these texts also contain some ordinary, ancient knowledge that uneducated can also gather easily making it a farrago of platitudes, confusion and baffling ignorance. Unless and until, there is honest acceptance of these facts, the ubiquitous menace of Islam will keep growing exponentially.

Besides, no matter how well-intentioned the claims of the existence of “Sacha Musalman” are, it inadvertently denies that extremists are not Muslims, thus extremists’ opinions are not engaged with, which again keeps nourishing the ideology that is responsible for 99% of the terrorist attacks.

Certainly, the World needs people like Irrfan or APJ Abdul Kalam for that matter, as role models for the young Muslims who can eventually dare to take on the non-reformist radical elements. However, the expression “Sacha Musalman” is an oxymoron and just a desi version of the “True Scotsman” fallacy. Rather than falling prey to this, there is a need to inquire whether the qualities of a “Sacha Musalman” flow from the Islamic ideology or from the rejection thereof? That is the only way we can fight the battle on the ideological terrain shaped from outside rather than the quicksand of internal Islamic understanding.

Practicing Hindu, author, lifelong seeker of knowledge. He has a Doctorate in Botany with interests in exploring religion, culture, and history.