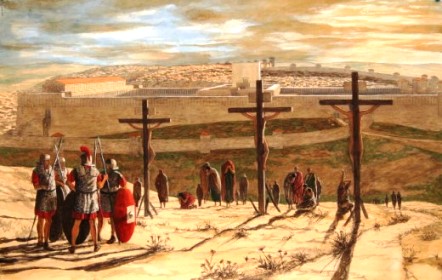 Christian propagandists claim that Jesus Christ is a symbol of love and compassion. However, The Bible tells a different story. In Drunk with Blood – God’s Killings in the Bible (pp. 271-274), Steve Wells admirably summarizes the biblical verses that portray Jesus as a bloodthirsty genocidal maniac. Wells is the creator of the famed Skeptic’s Annotated Bible website and funnily informs that he has “spent way too much time analyzing the three worst books (The Bible, The Quran, and The Book of Mormon) ever written.”

Let us now turn to Wells’ analysis of genocide that The Bible warns Jesus is going to unleash upon us. According to The Bible, Jesus would return to the earth holding a sickle in his hand (Revelation 14:14). An angel would tell him that it is time to start a bloody genocide. Another sickle-wielding angel would join Jesus and the duo would start a violent carnage. The blood they spill would cover the ground up to the horses’ bridles in a space of 1,600 furlongs (Revelation 14:15-20).

Now, 1,600 furlongs is about 320 kilometers, and a horse’s bridle is 1.5 meters high or so. If we take the bloodbath to be circular with a diameter of 320 kilometers, then the total volume is 1.2 x 1014 liters. Since an adult has about 5 liters of blood, that gives us 2.4 x 1013 (24 trillion) people. That is 4,000 times more people than what inhabit the earth now. Perhaps Jesus would wait till the population explodes to 24 trillion before unleashing this genocide. My Lord, thy mercy is limitless!

Wells points out that there is another way to estimate the number of dead on the doomsday. This revised estimate might appeal to those who abhor population explosion. According to this contradictory biblical prophecy, Jesus would unleash the might of the sword and hunger to annihilate a fourth of the population (Revelation 6:8). Assuming that the much awaited Second Coming of Jesus happens today, a fourth of the seven billion human beings (i.e., 1.75 billion) would be slaughtered.

Jesus would then let loose four angels, who would massacre one-third of the remaining population (i.e., 1.75 billion). Jesus won’t take the chill pill yet. He would instead command 200 million fire-breathing horsemen to massacre a third of the survivors. In all, 4.7 billion humans would be killed when Jesus returns.

No matter whether one subscribes to the lower limit of 4.7 billion or the upper limit of the incredible 24 trillion, Jesus would be winning the Olympic gold for committing genocides if there were one. Other genocidal maniacs pale in comparison: Hitler killed six million, Mao Tse-tung killed 45 million, and Stalin deliberately killed an estimated six million civilians. But remember, these 20th century monsters used modern weaponry and an industry-grade killing apparatus. Jesus, on the other hand, simply relies upon a Bronze Age weapon – a sickle, and yet beats these 20th century wimps hands down.

Hail Jesus! You are my superstar!

Now imagine a Hindu scripture endorsing such genocides by a Hindu God or Goddess. Christian propagandists and their leftist minions would’ve taken Hinduism to task. But then Christianity, which actually sanctifies genocides, is portrayed as the ‘religion of love.’ The shameless pseudo-intellectual Amartya Sen even infamously proclaimed that indoctrinating children in the violent teachings of Christianity in schools is “perfectly acceptable“ whereas teaching them the wisdom of Hinduism and its harmonious teachings is not. Sen also perversely claimed that Christian indoctrination creates a “tolerant atmosphere.”

Perhaps, Sen hopes that he wouldn’t be among the 4.7 billion victims of Jesus. Alas, I have bad news for the shameless Sen. The Bible says that only 144,000 male Jewish virgins would survive the slaughter (Revelation 14:3-4). Unless Sen is a Jewish virgin male, I am sorry to say that his hopes are misplaced.

Kalavai Venkat is a Silicon Valley-based writer, an atheist, and a practicing orthodox Hindu, and author of the forthcoming book What Every Hindu Should Know About Christianity.