I am a Kaffir and I need a Hug 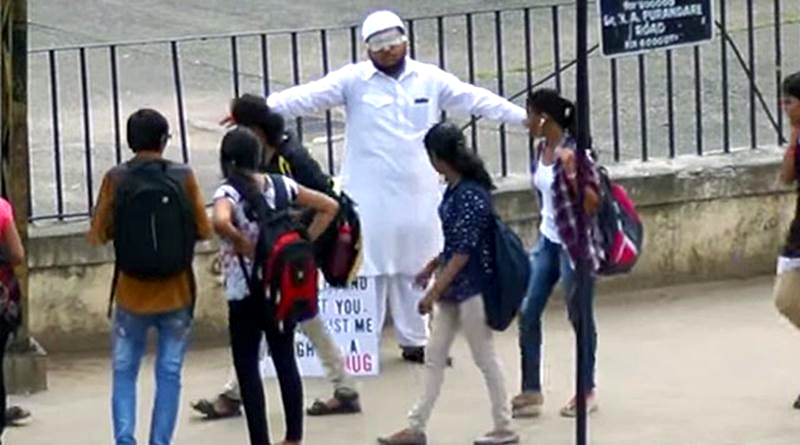 In the afternoon of 6 August, a blindfolded Muslim man named Mazim Mullah stood in a Mumbai street with his hands stretched open and a message that urged passersby to hug him: “I’m a Muslim and I trust you. Do you trust me? Enough for a hug.”

As the passersby stopped, many youths took up the trust challenge, walked up to him one by one and hugged him. Mullah’s image was shared on Facebook and other social media networks and liked by numerous people. The reason why it was liked is humanitarian but the message is political, which needs to be given some thought.

In a short video available on the internet, several girls – some of them wearing sleeveless tops and others donning headscarves – reached him and shook hands while at least one woman hugged him.

It is purely a humanitarian instinct to hug. Love knows no religion, no caste, and certainly no ideas that come in its path. A purely humanitarian desire will mean this: that you treat every person as a human being irrespective of their religious or other affiliation.

So, does it mean that Mazim Mullah, insofar as he decided to represent a Muslim, will be willing to marry a Hindu girl without converting her to Islam, or allow his sister to marry a Hindu boy?

In the republic the people of India nurtured from the 1950s onwards, a new generation of Indian youths has emerged, whose minds are not shackled to the emotional scars of the Partition or the Emergency’s political torments.

This class of Indians, still in their teens and twenties, represents a constitutional generation, with their aspirations and social attitudes rooted in the ideals of equality, free speech and love for the country. Indian youths today generally approve equal rights for homosexuals.

Mullah’s act is a political statement: will he hug a homosexual with open eyes? Equality is a political act. There is an associated question: why did he blindfold himself?

Interestingly, Mazim Mullah wore a skullcap to represent an average Muslim. To Mullah and those who liked his image on Facebook, here are some substantive questions: How many Islamic clerics wearing skullcap will permit girls to sing and to dance, which is the ultimate form of personal expression? Journalist Irshad Uppinangady has produced a documentary Swargada Haadiyalli Kamarutiruva Kanasugalu (Shattered Dreams on the Path to Heaven) in which 8-12 year old Muslim girls of Dakshina Kannada region dearly long to dance but their dreams are crushed: “The madrassa teacher will scold us. Aren’t we Muslims? We are not allowed to dance.”

The Burqa is an enclave of ideas in the cosmopolitan metropolis of Mumbai. Like the burqa, the skullcap contains a set of ideas that impinge on human agency and the ability of humans to progress. To Muslim boys who liked Mullah’s image on Facebook: will you allow your daughter and sister to hug a stranger?

Love is pure. Love is blind. It uplifts us as human beings. It teaches us to work across religions. What is the ultimate point of liking a blindfolded man? Aren’t the youths who hugged him with eyes wide open better human beings?

The fact is this: Mullah’s act is necessarily a political action. It is an ideological statement on India’s politics and society. Mullah is presenting himself as a victim, a political victim, an argument that has in post-9/11 years been used to rationalise mainstream Islamism, notably by Mumbai’s own televangelist Zakir Naik who has single-handedly damaged the cause of Islamic reform.

Like Naik, Mullah too advances the cause of Muslim victimhood in which Islamism thrives. Unlike Naik, Mullah’s act is politically sophisticated, which looks good for secularism.

Secularism loves skullcaps and Iftar parties. Mullah tells us something like this: I am excluded from your mainstream; I don’t trust you; do you trust me? Prove it. And Indian youths indeed step forward, take the bait, and prove it, proving that the country’s mainstream is ready to hug this poor victim.

The real question though is this: will Mullah hug the mainstream?

Next time you notice signs of Wahhabism in your neighbourhood, here is a reverse test question to ask your neighbour: will you allow your daughter to go to a dance school? If the answer is No, ask: who excludes you from the mainstream – yourself or the mainstream?

Mullah’s act does have a message: please hug an Ahmadi Muslim, hug a homosexual, hug a Shia Muslim, or hug a Bajrangi.

Indian society has a large heart: do not keep your eyes shut; do not sleepwalk. Hug but hug with open eyes. Allow your daughter to ride a motorbike or to go to a dance school. Prove that yours is not a gimmick. Prove that yours is not ideological sensationalism, not a political psychology in which secularism and Islamic exclusivism feed each other and swim together.