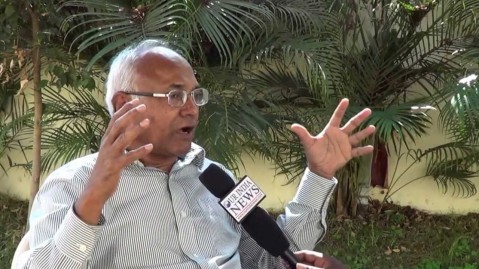 On 22 September Kancha Ilaiah wrote an op-ed in the Asian Age sharing his ‘wisdom’ regarding the controversial phenomenon of Love Jihad. As is the case with most self-proclaimed progressives in India, Mr.Ilaiah considers this menace to be a part of Hindutva-Brahminical theory to dominate over the rest of the populace. Consider this extract from the op-ed:

Under the pretext of this new theory of “love jihad” any attempts at inter-religious marriages, which in any case are few and far between, are being blocked. Even now India is not a land where marriages of choice, or love marriages as we call them, are encouraged. Matrimonial partners are by and large still endorsed by families under our thriving “arranged marriage” system. This arranged marriage system was institutionalised as it alone could nourish, feed and sustain the caste system. And that’s the reason it continues even in this day and age. The arranged marriage mechanism put an effective full stop to inter-caste and inter-religious marriages.

What I can opine is that it seems according Mr. Ilaiah, marriage by deceit (that is the core motive of Love Jihad) is a good alternative to arranged marriage. It cannot be absolutely determined whether love marriages are encouraged throughout India but because of the spread of education many Indian families nowadays take the opinion of both the boy and girl before deciding to get them married, a practice which was prevalent in the ‘Early Vedic Era’ a timeline Mr. Ilaiah cherishes in demeaning.

Mr.Ilaiah who resides in Hyderabad can himself find out that nowadays many families are indeed looking for merit and not caste when arranging marriages, but of course it’s a long way to go for all of India to engage in inter-caste marriages. Mr.Ilaiah would have been interested to know that certain members of BJP like Sushil Kumar Modi and the controversial Subramanian Swamy are actually married to non-Hindu women, and neither of their spouses converted.

The Brahminic lower caste Hindu women had been ostracised by society till the CheramanPerumal royals converted to Islam in the early 6th century. The pre-and post-AdiShankaracharya Hinduism had forced lower caste women to be in a semi-naked state. This in addition to the pubertal, menstrual and child birth seclusions inposed on them.Women who embraced Islam either by marriage or through other ways were immediately liberated from their semi-nakedness and various forms of untouchabilities. Though those who embraced Islam in Kerala in particular and south India in general took to the ways of the locals, rights accorded to women in the Quran changed their status instantaneously. Till medieval times Muslims were granted Quranic rights without any compromise. However, the AdiShankaraAdwaitaschool did not liberate the upper caste or the lower caste Hindu women from Manu’s brutal laws, dogmatic superstitions and caste-bound practices.

If my reading history is correct the founder of Islam,Prophet Mohammed was born in 570 C.E., which puts him in the late 6th Century CE. According to authentic historical sources, the final and complete revelation of the Islamic faith was made through Prophet Muhammad in the 7th century CE. As far as Kerala is concerned, most of the evidence provided by historians say that Islam arrived in Kerala through Arab traders either during the time of Mohammad himself or in the following few decades.

If the author H.G.Wells was alive he would have been flattered to know that someone took his literary masterpiece ‘The Time Machine’ literally, because only by turning back the wheels of time can the Cheraman Perumal royals convert to Islam in the early 6th century, even before the birth of its founder.

Further, what Mr. Ilaiah wrote about the Perumal royals is nothing short of a myth, which goes something like this:

Once CheramanPerumal was walking with his queen in the palace, when he witnessed the splitting of moon. Shocked by this, he informed his astronomers to note down the exact time of moon split. Then, when a bunch of Arab merchants visited his palace, he asked them about this incident. Their answers led the King to Mecca, where he met Mohammed and converted to Islam. Mohammed named him as Thiya-uj-uddan. Then, the king wrote letters to his kingdom to accept Islam and follow the teachings of Malik bin Deenar. Accompanied by Malik, Cheraman Perumal died on the way back to India.

But as documented in the book A Social History of India, it was the king of Maldives, Kalimanja, who converted to Islam. Mali, which was known to seafarers then, might have been misunderstood as Malabar (Kerala) must have given rise to the tale of Perumal royals’ conversion (see Cochin Gazetter).

Kancha Ilaiah has made his academic repute by tossing out ill-informed interpretations of Indian mythology, presenting them as ‘Aryan-Brahminical’ conspiracies against the down-trodden, while simultaneously claiming to be a follower of the rationalist Ambedkarite school of thought.

Let us read what Dr.Ambedkar had to say about the Vedic period and the position of women back then:

The stories of women entering into public discussions with men on most abstruse subjects of religion, philosophy and metaphysics are by no means few…..That at one time women were highly respected cannot be disputed. Among the Ratnis who played so prominent a part in coronation of the King in ancient India was queen and the King made her an offering as hid to the others. Not only the King elect did homage to the Queen he worshiped his other wives of lower castes.

Mr. Ilaiah can read about countless Hindu social reformers who bemoaned the social stagnation that crept into Hindu society during the medieval era, and who took every initiative to amend those anomalies. He is welcome to read a portion from this admirable piece to get an idea:

For any student of social science, studying the women empowerment in a society that is in transition from pre-modernity to modernity, one of the vital indicators would be the marriage age of the girls. Legal prohibition of marrying off the girl children in the name of custom and tradition plays an important role in making women achieve education and get empowerment in the society….…Towards this ,social reformers in India fought a very tough battle. Important pioneers who paved the way for stopping the child marriage were among them were Hari Singh Gour  who through his repeated appeals to recognize the  standards of modern clinical psychology was able to pass the law that raised the age of consent for girl children from 12 to 14.  That war for raising the marriage age of women and prohibition of child marriage was further taken up by HarbilasSarda…….Hari Singh Gour was member of the Legal Advisory Committee of the Hindu Mahasabha. HarbilasSarda was a proponent of pan-Hindutva.

Regarding the stand of Islamic scholars on women, here is a citation from The Revival of the Religious Knowledge written by Al-Ghazâlî (11th century) an authority on Islamic law:

She must not be well-informed nor must she be taught to write. She should stay at home. … If you relax the woman’s leash a tiny bit, she will take you and bolt wildly. … Their deception is awesome; their guile is immense and contagious. Wickedness and feeble mind are their predominant traits.

Let us add to that something Dr. Ambedkar also said:

The existence of these evils among the Muslims is distressing enough. But far more distressing is the fact that there is no organized movement of social reform among the Musalmans of India on a scale sufficient to bring about their eradication. The Hindus have their social evils. But there is relieving feature about them- namely, that some of them are conscious of their existence and a few of them are actively agitating for their removal… It is noteworthy that the Muslims opposed the Child-Marriage Bill brought in the Central Assembly in 1930, whereby the age for marriage of a girl was raised to 14 and of a boy to 18 on the ground that it was opposed to the Muslim canon law…

Mr. Ilaiah has the habit of accusing all his critics of being ‘Brahminical snobs’, and he surely will treat this piece the same. But will he also accuse Dr. Ambedkar of being a snob? Aren’t most of Ilaiah’s assertions completely contrary to what Ambedkar wrote?

But then molding historical truths to suit his agenda is a small matter for Mr. Ilaiah who’s endowed with the talent of turning back the wheels of time.