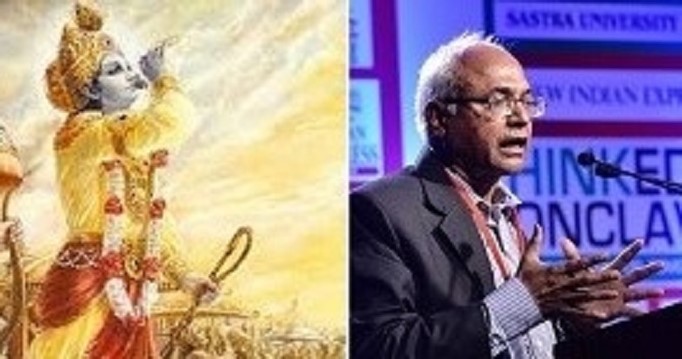 The very interesting Kancha Ilaiah wrote an op-ed in the 20 December edition of Deccan Chronicle displaying his good judgment regarding the debate centred on making Bhagavad Gita the national scripture. Although scholarly views on this  issue have been disseminated, Mr. Ilaiah has repeated his usual diatribe: raking up caste anomalies. The article begins with this:

For long the so-called ‘progressive activists like Kancha Ilaiah used to combine OBCs, Dalits and tribals as Bahujans claiming that the Bahujans are the most subjugated populace under the Aryan-Brahmanical dominance. But now we see a change in his views in the op-ed where he differentiates OBCs as a historically oppressed majority. Is this a subtle division of Kancha Ilaiah’s worries for the Bahujans? Seems like it.

The OBCs voted for Narendra Modi, India’s first OBC Prime Minister, in substantial numbers. But they have not got anything substantial from his elevation.Instead, the upper castes particularly Brahmins and Baniyas have got very visible positions in his ministry, and the Baniya industry is booming ever since Mr Modi and Amit Shah took over the state apparatus and the BJP. External affairs minister Sushma Swaraj’s attempt to bring an Act to declare the Bhagavad Gita as India’s national scripture, that is, the conscious keeper of India’s government and its people, has far more serious implications than Sadhvi Niranjan Jyoti’s obnoxious statement.

In the name of being a social progressive, Mr.Ilaiah does not hesitate in making an issue of the caste of the ministers. Last time I checked there were prominent faces in the Modi cabinet like Hansraj Ahir who belongs to the backward caste but I do not wish to paint the cabinet as a council of castes. But I must say I am surprised at Mr. Ilaiah’s overlooking of the Sadhvi Niranjan Jyoti issue.

For all his claims of having compassion for the lower-castes, Mr. Ilaiah does not seem to sympathize with this leader who belongs to the backward Nishada caste as she was lampooned by what Mr.Ilaiah himself terms as ‘the upper-caste media.’ And going by Mr.Ilaiah’s own logic he should be elated that all these upper-caste ministers and industrialists have to work under and are answerable to an OBC PM. After registering his casteist complaints Mr. Ilaiah decides to make some litigious claims. The relevant ones are reproduced below:

1. A careful reading of the Gita would show anyone that it fully supports the enslavement of Shudras and OBCs, a process initiated by the Rig Veda itself. Rig Veda formulated the caste structure in Purusha Suktha and the Gita upheld it.

3. Gita’s position on caste is a major problem for all those who have suffered oppression. The discrimination here is not individual discrimination; it is a discrimination based on caste. Though untouchables (dalits) were not mentioned in the Gita, they are now part of caste system.

4. I have not known any Yadav scholar of the Gita  telling the world that it is a liberative text for the Yadavs, leave alone other Shudras-OBCs and Dalits.

Those who are familiar with the works of Kancha Ilaiah will know by now his crafty ways of misrepresenting Dharmic texts. But the aforementioned points need to be examined before people start taking it for the irrefutable truth:

1. The Rig-Veda’s position on caste, is centred on this verse of Purusha Sukta :

In this hymn the Cosmic Man is pictured as the human body with the various parts embodying different classes of the society based on occupation and/or temperament – scholars, kings, businessmen and workers.

But the same Purusha Sukta goes on to explain the origin of various other components of the universe:

If we believe the spurious logic that Shudras are inferior because they originate from the feet, we must claim that all human beings are inferior as well because our planet earth also emanated from the cosmic man’s feet. Numerous scholars have articulated that this hymn’s message was the appropriate functioning of the society and not enforcement of a brutish hierarchy.
2. Non-Brahmin priests:

A notable quote from Kancha Ilaiah might interest the readers:

Turning non-Brahmin women into Sanskrit-chanting vegetarians cannot in any way be termed progress. In trying to follow in the path of Brahmins, these women are actually regressing,” says Ilaiah. “I liken the Arya Samaj luring these women into their fold to ‘Hitlerite Aryanism’ where women were indoctrinated into Nazi values.

And so, to Kancha Ilaiah who is complaining about the absence of non-Brahmin priests needs to make up his mind. He can’t have it both ways.

3. Regarding the debate of the Gita’s stand on caste, one should read this scholarly article titled Dr.Ambedkar, Dr.Elst and Bhagavad Gita. Here’s a relevant extract from this informed piece:

The knowledge that BG actually states that use of force and arrogance to hate the bodies of other humans, are really hatred for the very God-principle that resides in the Dalit bodies, can empower Dalit spiritually and fight exploitation rooted in the Indic spiritual tradition……

The statement was made based on the following verses of the Bhagwat Gita:

I am rich and born in a noble family.
I am the greatest. I shall perform sacrifice,
I shall give charity, and I shall rejoice.
Thus deluded by ignorance;

Bewildered by many fancies;
entangled in the net of delusion;
addicted to the enjoyment of sensual pleasures;
they fall into a foul hell.

Self-conceited, stubborn, filled with pride
and intoxication of wealth;
they perform Yajna only in name, for show,
and not according to scriptural injunction

Clinging to egoism, power, arrogance, lust, and anger;
these malicious people hate Me (who dwells)
in their own body and others’ bodies.

So you see Mr.Ilaiah, the book you are scorning at could become your greatest weapon.

4. The Bhagavad Gita has been described as the nectar of Vedanta by various philosophers and one of the greatest exponents of Vedanta in recent history has been the saint-reformer Narayana Guru who belonged to the lower-caste Ezhava community. The wise Guru was known to be an expert commentator of the Gita, as the some of the Ezhava families were traditionally given education in Sanskrit texts, both secular and sacred. The following extract of the Gita properly summarizes the concept of Vedanta:

This underscores one of the core messages of Vedanta which is Aham Brahmasmi that is I am Brahma, which has been given a brilliant defense by Dr. Ambedkar in the much controversial Riddles in Hinduism:

It is said that Brahmaism is piece of impudence. For a man to say “I am Brahma” is a kind of arrogance. The other criticism leveled against Brahmaism is the inability of man to know Brahma. ‘I am Brahma’ may appear to be impudence. But it can also be an assertion of one’s own worth. In a world where humanity suffers so much from an inferiority complex such an assertion on the part of man is to be welcomed. Democracy demands that each individual shall have every opportunity for realizing its worth. It also requires that each individual shall know that he is as good as everybody else. Those who sneer at Aham Brahmasmi (I am Brahma) as an impudent Utterance forget the other part of the Maha Vakya namely Tatvamasi (Thou art also Brahma). If Aham Brahmasmi has stood alone without the conjunct of Tatvamasi it may have been possible to sneer at it. But with the conjunct of Tatvamasi the charge of selfish arrogance cannot stand against Brahmaism. It may well be that Brahma is unknowable. But all the same this theory of Brahma has certain social implications which have a tremendous value as a foundation for Democracy.

I would earnestly request Mr.Ilaiah to read the Gita when he is not making crackpot assertions and see to it if he can really bring about radical, positive change in the society instead of spewing hatred based on fraudulent, selective and motivated readings of a tome which has stood the test of time as the guiding light of mankind for thousands of years.