Kanyadaan is Giving a Dear Daughter, Not an Unwanted Saree 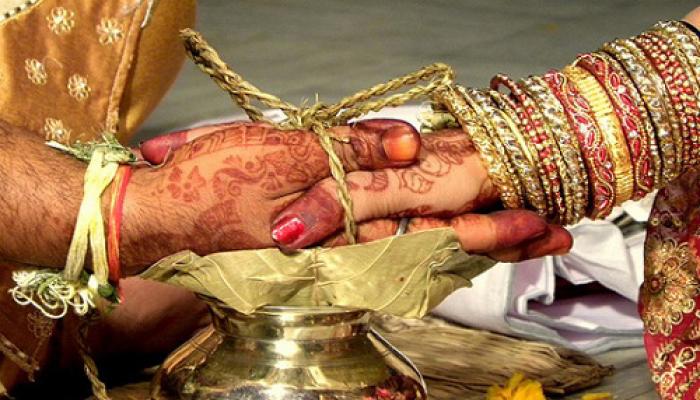 One prime example of how certain sections of the BJP are over-performing reform and liberalism as propounded by Marxists and Eurofeminists is by declaring that they shall not follow the ritual of kanyadaan in marriage as it smacks of treating the daughter as a property object and is thus male chauvanistic.

A major political family in Nagpur from the BJP has prided in performing vivaah without kanyadaan. This sort of bravado shows a complete ignorance of tradition and the meaning of the word daana which is based on the act of giving.

Daana does not mean disposing away my old shirt. Pasting the the feelings of a modern charity doer on the values of ancient Indian society is sheer ignorance. Today we dispose some things to acquire some other things. Charity and disposal are blurred in modern times. We only give ‘things’, not committments. Daana is givjng as a duty.

Prajapati or the Creator told the devataas to control their senses and said ‘da’ for daamyata or control. For Asuras he said the same ‘da’ indicating dayadhvam or practice of mercy. For humans (including those in political parties) he said ‘da’ meaning datta or give as humans are greedy.

Thus giving or daana became the foundation of Indian civilization in many many forms as obligations to be performed through pindadaana (sacrifices for ancestors, also practiced in Greece and China), vidyaadaana (knowledge to students & all coming generations) annadaana (for the hungry and dependent sections of social order), godaana (a primary tool for agricultural and dairy benefits) and kanyadaana (giving the daughter to a worthy groom for progeny and continuation of the human species for able offspring).

Daana or giving back was also the foundation of five debts to be mandatorily paid back by every householder or bread earner: to gods by yajna (later by puja), to gurus by producing good students, to parents by raising children, to birds and animals by sharing your food, to humans by extending hospitality, even to strangers and the unexpected (atithi).

British reduced to one kind and the Nehruvians merely upheld it. Five out of these, required kanyadana, as they were acceptance of the groom as the legitimate receiver by the family of the girl and resulted in alliances between families or line of households. Only three had no kanyadana as they were done secretly or by force.

In a video lecture (available here (1) & (2)), I explain the wide acceptance of plurality and diversity of marital alliances in classical India:

All dharmashastras condemn 5, 7 and 8 i.e. Asura, Raakshasa and Pishaca type of marriages. There were two other forms, very exceptional, hence not in the law books, Svayamvara and Veerashulkaa. In the former, the woman chose from suitors, and in the latter, she was won by a heroic feat.

The Indian nation is in the grip of a conservatism where it cannot look upon its heritage and older plurality with an open mind to negotiate diversity and flexibility in the institution of marriage. It either follows the British laws made for it from the nineteenth century reading of Hindu, Muslim or Christian texts. Or it latches on to an imitative cloning of Euro-American notions of ‘human rights’ and ‘gender equality’ based on individualism and atheism and faith in a dubious welfare state that delivers neither in the Socialist or the Capitalist mode.

Our nation does not wish to work out marital values free from religious conservatism suited to the needs of future challenges. We are in the midst of a bad habit, legitimizing modernity to belittlle the classical (and that too by not studying it as a prescribed national policy in education). Giving or daana was the cornerstone of all ancient institutions and social structures. Ours was not a cost calculative society, but a relationship generative society. Thus it was productive and prosperous in economy, ethics and the arts alike.