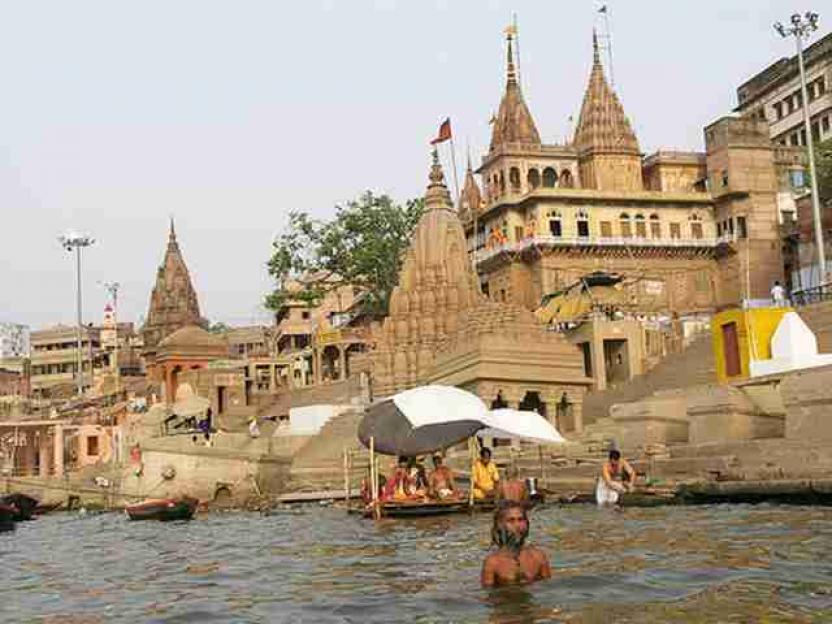 This report was triggered by a Facebook Live by the Sankaracharya designate of the Jyotish peeth, Swami Avimukteshwaranand Saraswati in which he accused the UP government under Yogi Adityanath of destroying heritage buildings, shrines, and ancient “murtis” in the name of Vikas (development). He further declared that he would be launching a “Mandir Bachao Andolan” (Save temples Movement) and called upon other Hindus to join him in this movement and send in their suggestions and feedback to help preserve the antiquity, heritage, and culture of Kashi. He compared what was happening to Kashi to what would happen to a person’s face if his nose was cut-off – the face would remain of course but it would never be the same again.

In trying to collate information for this write-up I ran up against several walls including:

This 700-meter corridor that can potentially accommodate 3,000 devotees at a time, is apparently being built to enhance “comfort levels” of the devotees. It will connect the Kashi Vishwanath Mandir to the Ganga (near the Lalitha ghat), the idea being that devotees can take a holy dip in the Ganga and come directly to have darshan of Kashi Viswanath.

The proposed plan also includes the construction of an 800-feet banquet hall where pilgrims can rest/relax after Darshan. The walls of the Banquet hall would showcase the sites, history, and culture of Kashi along with information on the important places in and around Kashi. The narrow 3-feet street that devotees walk through to get to the temple shall also be widened to about 16-feet. The streets leading to and through Dhundiraj Ganesh/Dhundi Vinayak Mandir on Vishwanath Gali Chowk and the Neelakant Dwar will also be expanded.

Given how narrow the winding streets of Kashi are, it is fair to assume that any development or expansion would necessarily mean the breaking down of old structures including possibly heritage structures, shrines and murtis. Does Vikas/development leave us with no choice but to sacrifice our culture, history, and heritage at the altar of modernity and globalization?

This is a difficult question to answer particularly when one discusses it in the context of arguably the oldest city in the world where Shiva resides in every stone; every house is a Mandir, and every Mandir is a house of Shiva.

In addition to the live Facebook address, there is also a letter (see image below) that has been purportedly written by the Sankaracharya designate addressed to the UP CM where he outlines several key concerns, including:

The letter further requests the state government and the CM to stop destruction of heritage in the name of development and also rehabilitate and reestablish/rebuild the heritage sites that have been destroyed till date.

The Swamiji has stated quite clearly “मंदिरों की शहादत की शर्तों पर विकास मंजूर नहीं” (If destruction is the price we have to pay for vikas/development then that is not acceptable). He has also reached out to the dalits who have agreed to be part of the protests against the proposed corridor. The Swamiji has also made it clear in his speeches that he holds PM Modi equally responsible for the decision to build this corridor which could end up destroying a part of the cultural heritage of Kashi, going even as far as to declare that the PM, CM, and BJP are not Hindus.

There have also been protests by the “Dharohar Bachao Samithi-Kashi” who have led protest marches and all the shop-keepers lining the narrow street leading up to the Kashi Vishwanath Mandir have even observed  one-day bandh protesting the demolition and urging the government to desist from moving forward with the planned Kashi Corridor. There have also been reports of shopkeepers staging a protest “flag-march” after the locks and doors of a few shops were allegedly broken.

The senior Sankaracharya Shri Swaroopanand Saraswati has also written to PM Modi and has stated that the “Mandir-Ganga pathway (corridor)” is a disaster in the making. He has further stated that “instead of cleaning up Mother Ganga, the government by planning to build this corridor is bent on destroying the very fountainhead of Kashi’s culture and heritage”

While there is much that is still unclear, what is clear though is that the Ganga flows disquietly and the ancient stones of Kashi and the Sants, Mahants, and people of Kashi are uneasy – and therefore a middle ground has to be found.

This YouTube video captures in poignant detail what is happening and will happen if this plan to build a corridor is forced down the throats of the reluctant citizens of Kashi, particularly those who would be directly affected by this corridor.

While it is fashionable to quote “Change is the only thing that is constant” there are indeed some things that are best left unchanged. Kashi is one such sacred geography. The stones, the pathways, the walls, shrines, waterbodies, and temples have been witness to some of the most epochal events in the history of this land – It was here (Sarnath) that the Buddha set in motion the “Wheel of Dharma” giving what is believed to be his first discourse. It was here that Tulsidas composed his epic the Ram Charit Manas. Adi Sankara walked the streets of the city, as did Nanak, and Kabir and so many more.

Then again, in matters of faith and shraddha, how can you argue or play around with the belief that in this city that sits atop the great Trishul (trident) of Shiva, it is Shiva himself who resides in every stone and where every house is a Mandir and every Mandir is a house of Shiva?

It is no one’s case that development is bad but development that disregards history, culture, sentiments, shared roots, and heritage is certainly undesirable. Culture is the very core, the fundamental substratum of a society and its people. It is the thread that connects us to our past, keeps us anchored to the present, and guides our future. It is culture that teaches every member of a society both the nature of their lives and also its purpose.

Societies that fail to preserve their culture are typically the ones that start losing their sense of shared identity, history, heritage structures, monuments, roots, civilization, and way of life. The signs of this deracination are only too evident in our society. It is in this context that the need to find a middle ground that balances the need for infrastructural development on one hand and cultural preservation on the other is crucial. While it may well be true that a new pathway from the Ganga to the Kashi Vishwanath temple may be a boon to pilgrims, what is also true is the fact that the only option cannot be to build it by reducing to rubble the sentiments, culture, and heritage of the people and city of Kashi.

The CM, PM, and the government cannot neglect the genuine concerns and sentiments of the people of Kashi. Alternatives must be found, experts consulted, and plans drawn up to ensure that development does not mean single-minded pursuit of modernity even at the cost of destroying our very roots.

In matters such as these it is good to be guided by the heart and not just by the mind.