Have the Left-Liberals read Dr. Ambedkar at all? 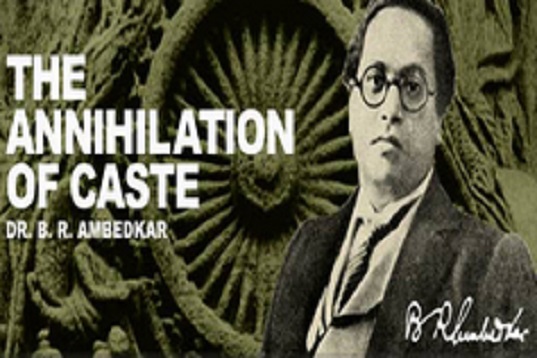 For decades we have become accustomed to hearing the diatribes of many so-called progressives that Hindu society at large is responsible for all the woes that plague India today, and in order to achieve progress we need to change the very nature of Hindu society. The statements of change have ranged from sensible ones like calls to introspect our past properly to wacky ones like the appeal to publicly re-write the Purushasukta of the Rig-Veda.

[pullquote]Even though, Dr. Ambedkar suffered the humiliation due to the caste aberration throughout his life, he did not allow the humiliation to hamper his erudition which was seen when he countered Mahatma Gandhi’s mixing of caste and the Vedic system of Varnas[/pullquote]

Putting the peculiarities aside, it is an undeniable and unfortunate fact that many social evils do afflict Indian society at large and many of them are results of misinterpretation and distortion of Hindu texts. Right on top of these social sufferings is the anomalies we have in the domain of caste. Even in the twenty first century we have people who still believe in notion of caste hierarchy. These notions often lead to horrendous acts of violence against people belonging to backward castes.

But the glimmer of hope for India has been Hinduism’s capacity for revitalization and reform, and it is this capacity which has given space for stalwarts like Swami Vivekananda, Sri Narayana Guru, Kandukuri Veerasalingam among others who took bold steps to reform Hindu society. But their actions are not very popular among the elite crowd of Indian social progressives, who choose to blame Hinduism without reading or knowing much about it. Ironically and more often than not, they choose to align themselves with iconic figures like Dr. Bhimrao Ramji Ambedkar, in order to give their claims authenticity. I doubt how much of Ambedkar’s writings they have read.

These progressives slyly ignore Babasaheb’s works which attempted to explain the caste anomaly based on its socio-historical situation. Dr. Ambedkar is one of the very few scholars who have both written and spoken at great lengths on India’s social history. Yet in many of our educational establishments, students are taught more of Marxist social theories over Ambedkar’s works.

These Marxist and their affiliated establishments only make a cursory mention of Ambedkar to keep their image of progressives intact. This practice culminated in its logical end the previous year when the well known professional sympathizer of the Naxalites/Maoists Arundhati Roy was invited to pen the foreword to the latest edition of Dr. Ambedkar’s Annihilation of Caste. Many active admirers of Ambedkar called Ms. Roy a distortionist whose knowledge of Ambedkar is questionable.

While this topic is itself a matter of debate it did revive interest in this stellar work of Babasaheb on India’s social anomalies. A cursory reading of Annihilation of Caste may give the reader the impression that this book is anti-Hindu but one needs to look into the context in which this text was written. During the days of the British Raj, many acts of reform envisaged and implemented by well-known advocates of Hindu nationalism were repulsively resisted by the Hindu orthodoxy. Dr.Ambedkar was aware of how those Hindu nationalists fought against their own orthodoxy to remove the social evils and always heaped praises upon them in most of his writings. Like them he also wanted a strong Hindu society as can be seen in this statement:

Unfortunately the Hindu orthodoxy was gaining strength inside the Congress party under the leadership of Mahatma Gandhi. Dr.Ambedkar rightly remarked this as impeding the radical social reform needed for Hindu society. But his idea was in complete contrast to the Marxist belief in calling for a bloody revolution based on only economic criteria:

Even though, Dr. Ambedkar suffered the humiliation due to the caste aberration throughout his life, he did not allow the humiliation to hamper his erudition which was seen when he countered Mahatma Gandhi’s mixing of caste and the Vedic system of Varnas:

What is the difference between Caste and Varna, as understood by the Mahatma? I find none. As defined by the Mahatma, Varna becomes merely a different name for Caste, for the simple reason that it is the same in essence—namely, pursuit of [one’s] ancestral calling. Far from making progress, the Mahatma has suffered retrogression. By putting this interpretation upon the Vedic conception of Varna, he has really made ridiculous what was sublime. While I reject the Vedic Varnavyavastha for reasons given in the speech, I must admit that the Vedic theory of Varna as interpreted by Swami Dayanand and some others is a sensible and an inoffensive thing. It did not admit birth as a determining factor in fixing the place of an individual in society. It only recognized worth. The Mahatma‘s view of Varna not only makes nonsense of the Vedic Varna, but it makes it an abominable thing. Varna and Caste are two very different concepts. Varna is based on the principle of each according to his worth, while Caste is based on the principle of each according to his birth. The two are as distinct as chalk is from cheese. In fact there is an antithesis between the two. If the Mahatma believes, as he does, in everyone following his or her ancestral calling, then most certainly he is advocating the Caste System, and in calling it the Varna System he is not only guilty of terminological inexactitude, but he is causing confusion worse confounded. (Annihilation of Caste, page-48)

Due to the attachment of many Hindus to the sacred texts and the overwhelming popularity of Mahatma Gandhi, Dr. Ambedkar made a serious appeal to him:

Reformers working for the removal of untouchability, including Mahatma Gandhi, do not seem to realize that the acts of the people are merely the results of their beliefs inculcated in their minds by the Shastras, and that people will not change their conduct until they cease to believe in the sanctity of the Shastras on which their conduct is founded. No wonder that such efforts have not produced any results. You also seem to be erring in the same way as the reformers working in the cause of removing untouchability. To agitate for and to organise inter-caste dinners and inter-caste marriages is like forced feeding brought about by artificial means. Make every man and woman free from the thralldom of the Shastras, cleanse their minds of the pernicious notions founded on the Shastras, and he or she will inter-dine and inter-marry, without your telling him or her to do so. It is no use seeking refuge in quibbles. It is no use telling people that the Shastras do not say what they are believed to say, if they are grammatically read or logically interpreted. What matters is how the Shastras have been understood by the people. You must take the stand that Buddha took. You must take the stand which Guru Nanak took. You must not only discard the Shastras, you must deny their authority, as did Buddha and Nanak. You must have courage to tell the Hindus that what is wrong with them is their religion—the religion which has produced in them this notion of the sacredness of Caste. Will you show that courage? (Annihilation of Caste, page-31)

The aforementioned statement has been used by many of India’s progressives to show that Ambedkar was anti-Hindu, again showing their scanty understanding of Indian history and philosophy. As stated by many reputed scholars, the core essence of Sanatana Dharma is that of open spiritual and philosophical inquest and personal choice, leaving the space wide open for anyone who wishes to adopt it, and it was the slow degeneration of this core that led to the social anomalies. The scholarly Babasaheb was aware of this tradition as can be seen in the following statement:

Whether you do that or you do not, you must give a new doctrinal basis to your Religion—a basis that will be in consonance with Liberty, Equality and Fraternity; in short, with Democracy. I am no authority on the subject. But I am told that for such religious principles as will be in consonance with Liberty, Equality and Fraternity, it may not be necessary for you to borrow from foreign sources and that you could draw for such principles on the Upanishads. Whether you could do so without a complete remolding, a considerable scraping and chipping off from the ore they contain, is more than I can say. This means a complete change in the fundamental notions of life… (Annihilation of Caste, page-38)

[pullquote]Dr.Ambedkar was aware of how those Hindu nationalists fought against their own orthodoxy to remove the social evils and always heaped praises upon them in most of his writings[/pullquote]

One would claim that Annihilation of Caste used harsh words against the Vedas and Hindu texts, but even a great champion of Hindu causes like Swami Dayananda Saraswati had made strong attacks against the Puranas and Upanishads. This is possible because unlike most other traditions Hinduism as well as Hindutva thrives on such vigorous debates and polemics. It would be beneficial for today’s generation to read Annihilation of Caste keeping this perspective in mind.

IndiaFacts impact: WELS takes down its blog after our expose

Proselytisation in India: A critique from a Dharmic perspective