The legend of King Hayagrīva 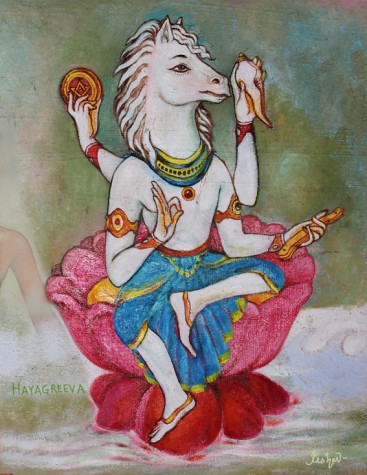 After the Great War at Kurukṣetra and the conquest of Hastināpura, Yudhiṣṭhira went through a phase of deep despondency. Given his pacific nature, he was immensely troubled by the violence he had inflicted by killing his kinsmen, relatives, teachers and other great heroes. This came in the way of this ability to rule effectively and he apparently had thoughts of renouncing the world and leading the life of an ascetic.

At this juncture, he was shored up by some brilliant advice from his brothers and wife. To cap their advice, the sage Vyāsa Kṛiṣhṇa-Dvaipāyana himself arrived at his court, confirmed the views of Draupadī and the other pāṇḍava-s, and taught Yudhiṣṭhira the right path. In the course of this teaching, he narrated to Yudhiṣṭhira a small, ancient legend of a king known as Hayagrīva (mahābhārata “Critical edition” 12.25.22-12.25.33)1

I shall narrate to you, tiger among kings, this legend of what happened in the past in regard to the royal sage Hayagrīva.

[The is the story of him] O Yudhiṣṭhira, who was heroic, intelligent, of unfailing acts, who after slaughtering his foes without assistance, was overcome himself and slain in the midst of battle (ājau= in battle is a distinct epic usage).

Indeed, having performed those deeds for the suppression of enemies, adopting the foremost measures for the protection of people, having performed his duties in battle, Hayagrīva attained glory, and is rejoicing in the deva-world.

Having sacrificed his life in the midst of battle with bow drawn, slashed by weapons while attacked by evil-doers, firm in his actions, the great soul, having attained his objectives, is rejoicing in the deva-world.

[At this sacrifice] his bow was the sacrificial stake, his bowstring was the rope [for tying the animal to be sacrificed], his arrows the offering ladle, his sword the scooping ladle, and the blood [spilled in it] the ghee. His chariot was the altar, his unrestrained movement in battle the [ritual] fire, and his four foremost horses his four Vedic ritualists.

Having offered on that ritual fire his foes as oblations, free from sins that energetic lion among kings, finally offered his own life-breaths as though it was the offering at the bath at the termination of the Vedic ritual; Hayagrīva now rejoices in the deva-world.

Protecting his nation intelligently and with good policy, the great soul, firm in Vedic rituals sacrificed his life. All realms have been encompassed by the fame of this intelligent king Hayagrīva, who rejoices in the deva-world.

Accomplished in matters of divinities, human affairs and justice, and having protected his land with the devices of law, that king, the great soul, firm in dharma, Hayagrīva rejoices in heaven.

Learned, renunciation, with good conviction and grateful, having performed his duties, he abandoned this world of men and attained that region reserved for the intelligent, scholarly and esteemed upon leaving his body.

Having obtained all the Vedas and having studied the shAstra-s, having protected his entire nation, having installed the four varṇa-s in their respective duties, the great soul, Hayagrīva, rejoices in the deva-world.

Having won battles and having protected his people, having drunk soma having pleased the brāhmaṇa-s, and having held the rod of justice with appropriate measures for this people, slain in battle, he rejoices in the deva-world.

His conduct was laudable, learned and good men deservedly praise his worthy behavior. Having won heaven, and having gone to the realm of heroes, the great soul of pure fame attained perfect success.

This short narrative, at the face of it, might seem unremarkable in the body of the great epic bristling with all kinds of interesting legends. However, it embodies within it a succinct collection of notable ideals held by the ancient Hindus.

The persistent motif in it is the ascent of king Hayagrīva to the deva-world upon his death in battle. This motif is an ancient one seen in other sister cultures of the Indo-European world: It is rather pronounced in the Germanic world where the slain warriors go to rejoice in the divine realm of Valhalla. In the Greek world there is a memory of a realm called Elysium, which was attained by great heroes upon their death. While this theme is made obvious by the phrase modate devaloke (rejoices in the deva-world), it is also clear that vyāsa uses it as didactic platform. He wishes to instruct yudhiṣṭhira regarding the duties of an ideal ruler, including when he needs to commit violence and sacrifice his own life if needed.

The key points that are emphasized by the narrative are:

● It is necessary for a king to commit violence when he is confronted by evil-doers (dasyu-s) and slay them in battle. In particular, if this is committed to protect the nation (rāṣṭra) and his people (praja), then it is a meritorious deed.

● Death in such a battle is implied to be the gateway to the realm of the deva-s, where the ruler, who has died thus, is said to rejoice. The narrative also implies that the king should make fighting such a battle, even if outnumbered, his primary duty.

● Indeed, the performance of this act is hence equated to a Vedic ritual. In generating this equivalence the narrative establishes many saṃbandha-s (connections) between the Vedic ritual and the battle fought against the evil-doers.

Specifically, it is compared to the Vedic animal sacrifice (e.g. nīrūḍha-paśubandha), along with the use of technical terms from ritual literature: the sacrificial stake (yūpa), the rope for tying the animal victim (raśana), the offering ladle (sruk), the scooping ladle (sruva), ghee offered in the fire, the altar (vedi), the ritual fire and four Vedic ritual specialists, namely the hotṛ belonging to the ṛgveda, the adhvaryu belonging to the yajurveda, the udgātṛ belonging to the sāmaveda and the Brahman usually assigned to the atharvaveda.

The final sacrifice of the king in such a battle is equated to the bath which takes places at the end of the Vedic ritual (the avabhṛtha). In Hindu tradition the performance of a ritual (karman) is said to yield a result (karmaphala), which, among other things, might be a place in the deva-realm. By equating the battle for the protection of the nation and people to a Vedic ritual, the narrative offers a justification of the fruit attained by the king via his sacrifice. Through this equivalence, vyāsa brings home to yudhiṣṭhira that such a battle is not a sinful act but a meritorious and holy act, just like the cognate Vedic ritual.

● The narrative also touches upon the duties of such a king with respect to his state. He is described as being intelligent and cultivating scholasticism through the study of texts and patronage to brāhmaṇa-s, who were generators and preservers of knowledge. He is described as being diligent in applying law to bring justice among his people (daṇḍa or the rod of chastisement) and upholding the stability of society.

He is said to apply his intelligence and sound policy for the defense of his nation (rāṣṭraṃ rakṣan buddhi-pūrvaṃ nayena). He is also particular about the performance of Vedic rituals, such as the great soma rituals. Thus, vyāsa within a short narrative conveys to yudhiṣṭhira the essentials of the Hindu ideal of a ruler. He emphasizes that the upholder of dharma, who commits violence or perishes in the defense of his nation and people, is performing a holy act. Hence, in such cases, one should not be afflicted by doubt or grief over such actions.

When we look at pre-modern India, we find several rulers who lived up to this ideal, but one name which fits the bill in its entirety is the great paramāra ruler Bhojadeva.

He lived the life of a scholar, stood as a wall against the Islamic invasions of the Ghaznavids in the 1020s and again in 1043 CE, finally dying in battle defending his kingdom. This ideal widely permeated the collective kṣatriya mind and was kept alive by the overtures of the brāhmaṇa-s.

A good example of this can be observed in the course of the invasion of Northwestern India by Macedonian Alexander. He met some of the fiercest resistances in his entire career, from the kṣatriyas of those regions because they were inspired by the ideal of dying in the defense of their nation by brāhmaṇa-s.2

Alexander then targeted the brāhmaṇa-s who also sacrificed themselves following a similar ideal.3 When Alexander was about to hang a brāhmaṇa, he asked him what had made him instigate the kṣatriyas to attack the Macedonians. The brāhmaṇa bluntly replied: “I wish to live with honor or die with honor”. In essence, he was going by the ideal taught by the example of the ancient king Hayagrīva. The consequence of these sacrifices was that the Macedonian forces were completely eliminated in Northwestern India within 10 years of Alexander’s retreat from India. In the medieval period it was the same ideal, which inspired the local warriors of whom the only memories are vīra-kal-s (victory stones) dotting peninsular India. Again, it was the same ideal which inspired the medieval and early modern Hindu warriors in the struggle against their mortal enemies in the form of the Mohammedan and Christian invaders.

In conclusion, one may note in passing that the Hindu self-sacrifice in a dharma-yuddha is a very distinct concept from that of martyrdom shared by Abrahamistic religions. Whereas the former is for the protection of dharma, the latter is for the imposition of a delusion that has come upon a mentally diseased “prophet” on an otherwise normal population.

1: The Critical Edition or the Pune edition of the mahābhārata is not a reconstruction of the ancestral text via textual criticism in the real sense. Rather, it is more of a strict consensus edition.

2: For a complete narrative of these events, one might refer to the book “Alexander of Macedon, 356-323 B.C.: A Historical Biography” by Peter Green; page 425.

3: Just prior to this narrative in the mahābhārata, Arjuna the third pāṇḍava provides a teaching wherein he clarifies that though it is not the primary duty of a brāhmaṇa, when the need arises he too needs to engage actively in combat to slay evil-doers and, if need be, die in the process.

The greatness of Lord Sri HayagrIva in Indian tradition