Lessons From China’s Ban of Namaz 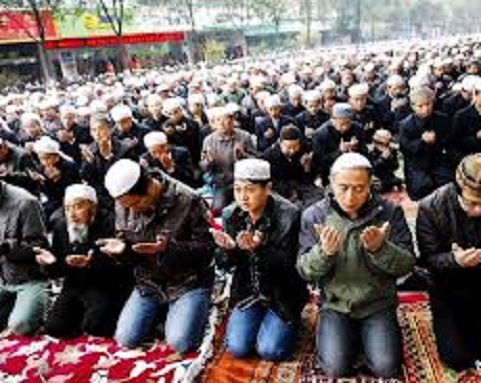 According to a recent TOI report the authorities of Xinjiang region in western China have issued a ban on carrying out namaaz and other religious exercises in government buildings, schools and business offices The ban also disallows people from wearing or forcing others to wear religious clothes or logos.  As per the report:

The government’s orders will affect Muslim employees, many of whom are known to conduct at least two of the day’s five prayers in quite areas of office buildings during a work day, informed sources said. Many Muslims are also known to use mobile phones and computers to study or practice religion hymns, which are embedded in alarm clock and other software.

“An increasing number of problems involving religious affairs have emerged in Xinjiang,” Ma Mingcheng, deputy director of the Xinjiang People’s Congress and director of its legislative affairs committee, told the local media.

Chinese officials have earlier said that Xinjiang has seen a sharp growth in religious fundamentalism, which may be affecting young minds and turning some of them towards terrorism. The region, which borders Pakistan, is a hotbed of a violent separatist movement run by the East Turkmenistan Islamic Movement.

The new rules, which come into effect January 1, also prohibit people from distributing and viewing videos about jihad, or holy war, religious extremism and terrorism in or outside religious venues, and requires religious leaders to report such activities to the local authorities and police.

Of course those who are aware of China’s administration and history will not be surprised by this move. Since its establishment in 1948, the People’s Republic of China has upheld the stringent policies of its chief leader and long time ruler Mao Zedong who himself was a devoted Stalinist. It meant the state shall have no God or religion and anyone not accepting this diktat will be mercilessly penalized.

[pullquote]The erosion of Chinese heritage caused by Maoism is yet to be reversed.[/pullquote]

The first victims of this Maoist mercilessness were the rather docile residents of Tibet where a certain form of Mahayana Buddhism was practiced.  Many historians are uncertain over the precise date, but most of them state that on 7 October units of the People’s Liberation Army crossed the River Yangtze into Kham, the eastern province of Tibet. The invasion resulted in the exodus of a young Tenzing Gyatso the present Dalai Lama and his scores of followers, most of who now dwell in India. Although the Chinese government allowed some of the Buddhist buildings to function the PLA burned down several texts and manuscripts of the Buddhist tradition while the surviving ones were taken away by the followers of Dalai Lama to India.

The seed of this invasion was rooted in an official resolution passed by the Communist Party of China as early as in 1927 stating that China was not an Asiatic society. This resolution started the process of denigrating the spiritual and cultural milieu of China.

This malpractice reached its peak in August 1966 when at a meeting of the Communist Party’s Central Committee Mao launched the Great Proletarian Cultural Revolution. Under his orders schools and colleges were shut down, as Mao called for a massive youth mobilization to take those party leaders to task who embraced ‘bourgeois values and lacked revolutionary spirit.’ In the following the students formed paramilitary groups called the Red Guards and attacked and harassed members of China’s elderly and intellectual population. These Red Guards also ransacked national libraries and torched down centuries old manuscripts which illuminated the thoughts and traditions of Confucius, Lao-Tzu and Li-Po. The erosion of Chinese heritage caused by Maoism is yet to be reversed.

[pullquote]In the mind of India’s secular eminences and the multiculturalists of Europe, the Muslim is always stereotypically orthodox and opposed to assimilation with national culture, and that this fact is a given, not to be questioned. [/pullquote]

The centre of this recent controversy the Xinjiang region is the home of the Uighur Muslim populace whose origin is a matter of dispute between Chinese officials and Uighur nationalists. The region in the past had a blinking phase of autonomy and occasional independence, but was finally brought under Chinese control in the 18th century.

Under Communist Xinjiang witnessed a large-scale immigration of Han Chinese, leading to Uighur allegations of discrimination giving rise to anti-Han separatist sentiment since the 1990s. From the BBC site:

Protests against Chinese rule had already emerged in the 1990s, to which the Chinese authorities reacted forcefully. These culminated in clashes in the city of Yining (Ghulja in Uighur) in 1997 in protest at the execution of 30 alleged separatists. The authorities reported nine dead in the violence, although separatists said more than a hundred protestors were killed.…Protests resumed in March 2008 in the cities of Urumqi and Hotan, and spread to Kashgar and elsewhere through the summer – coinciding with the Olympic Games in Beijing. There were reports of bus bombings and attacks on police stations…..Beijing has sought to deal with the unrest with a mix of repression and efforts to stimulate the region’s economy, including through increased investment by state-owned firms…..In 2013 there was a sudden upsurge in violence, when the authorities accused separatist “terrorists” of attacks in Kashgar that left 21 dead in April. There was further violence in the summer and in 2014, and exiled Uighur groups accused China of exaggerating the threat in order to justify repression.

Hence it is not surprising that many advocates of secularism in India, mostly those in academic institutions like JNU-HCU are mum on the issue of China. Rather they repeat the naive lofty ideals of European multiculturalists whose activities have emboldened the rise of radical Islamic fanaticism, the consequences of which we are witnessing from Europe to Africa to Asia.

In the mind of India’s secular eminences and the multiculturalists of Europe, the Muslim is always stereotypically orthodox and opposed to assimilation with national culture, and that this fact is a given, not to be questioned.  To quote Pascal Bruckner: Multiculturalism is racism of the anti-racists: it chains people to their roots.

The extreme opposite of this kind of mindset can be seen in China where the administration will ensure people are tuned to the state’s national policy even if it means implementing brute force. Contrast both the notions to this statement:

This was stated by that dreaded figure of hate as the secularists call MS Golwalkar. This reflects the accommodating spirit of Hindutva which survived centuries after India’s cultural essence was ravaged by the Islamic invaders. And it is this spirit which we see lacking in the lofty secularism a lot of liberals advocate. However that accommodation should not be extended to views which are in opposition to it, namely the process of rabid Evangelization and radical Islamism. Looking at the present act of China our secular eminences may want to review their stand on Hindutva.