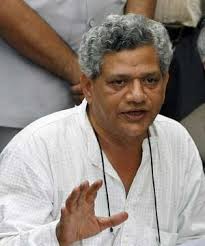 An op-ed penned by CPM’s Rajya Sabha MP Sitaram Yechury which appeared in the Hindustan Times on September 23 2014 echoes the same allegation mentioned in a previous report also from the Hindustan Times– that is, the RSS’s new found “agenda” of absorbing Dalits into the larger Hindu fold by rewriting history.

In this response I already mentioned that one should write books on such matters only after in-depth research of reliable primary sources. But what caught my attention in Yechury’s piece was his uncorroborated attack on the RSS, as cited below:

In fact the origins of the RSS itself are based on the religious sanction of the ‘Hindu code’ which the most sacrosanct of RSS sarsanghchalaks, Madhav Sadashiv Golwalkar, endorsed.

In a 1939 tract titled ‘We or Our Nationhood Defined’, Golwalkar acclaims Manu as the “first and greatest law giver of the world” who “lays down in his code directing all the peoples of the world to go to Hindustan to learn their duties at the holy feet of ‘eldest born’ Brahmins of this land”…..

Now what does the Manusmriti say? “Serving Brahmins alone is recommended as the best innate activity of a Shudra; for whatever he does other than this there is no fruit for him” (Chapter X, 123).

The Manusmriti then proceeds to define the outcastes and untouchables who have no place in society at all and defines their menial activities. This intolerant caste structure finds expression in the RSS today as the Manusmriti is exclusively based on ‘Aryan social organisation’.

“Un-Aryan behaviour, harshness, cruelty and habitual failure to perform the rituals are the manifestations in this world indicating that a man is born of a defiled womb” (Chapter X, 58).

The establishment of such a ‘Hindu rashtra’ however, requires incontrovertible proof that Aryans originated from these lands alone and did not come here from anywhere else.

All questions of historical evidence are brushed aside by the RSS, by an assertion of ‘matters of faith’. Historian Romila Thapar, establishes that “the linguistic evidence of Vedic Sanskrit supports the coming into India of a Indo-European language from Iran but does not support the notion that India was the homeland of the Aryan speaking people”. (Seminar, 400, 1992).

To begin with, it is interesting to see Mister…I mean Comrade Yechury speak of rewriting history and then bring up a discredited theory to make his point. As far as Romila Thapar’s statement is concerned, this brilliant analytical reportconfirms her ignorance by exposing it to sunlight. The citation related to the issue is reproduced below:

…It was the publication in 2011 of a path-breaking study that ultimately sealed the fate of the Aryan Invasion or Migration theory……..The authors, by analysing genomes of 571 individuals representing 73 ethno-linguistic groups, also ruled out Eurasian gene flow during this time period, concurring with the finding of another study that such an event could not have happened before 12,500 years. Moreover, argued the scientists, 3500 years ago India was a already a densely populated region with well-established agricultural practices and therefore the Eurasian migration would have had to be immense in order to explain the fact that half the Indian population is derived from ANI. The Aryan Migration event of 1500 BCE has also been questioned based on an authoritative haplogroup U linkage study wherein scientists found an extensive and deep late-Pleistocene link between Indians and Europeans, suggesting a coalescence near the time when Asia was initially being peopled……..

It has also been shown that the gateway to the subcontinent, the Hindu Kush – where the earliest archaeological evidence of human remains dates back to 26,500 years before the Rig Veda – was a confluence of gene-flows in the early Neolithic period as opposed to an indigenous population…..The verdict of population genetics is clear, and profound, as pointed out subsequently by the lead author of the Nature study Dr Lalji Singh himself: “There is no genetic evidence that Indo-Aryans invaded or migrated to India. It is high time we re-write India’s prehistory based on scientific evidence.”

Prof Thapar, though, is dismissive of the overwhelming scientific evidence that negates the Aryan Migration event….. Time waits for no one, least of all junked theories. Scientists, having pointed out that the Müllerian Aryan Invasion – or the Romilian Aryan Migration – never happened, have returned to their garages……

Next, because Comrade Yechury quoted some “nasty” verses from the Manusmriti, here are some other verses documented in that very same, much detested text:

Quoting the Manusmriti selectively is a favorite custom of our secular eminences. And Comrade Yechury can’t be accused of being guilty on this count at least. His communism can be tried in a different court.

But the good comrade should be aware of the fact that there is no single body of canonical law, no Hindu Pope to legitimize a uniform legal code for Hindu community.

There were substantial differences in the approaches and guidelines of different smritikaras—law-givers. But none of them ever claimed that theirs is the definitive version of a law book. They acknowledge that the authority of the king and the law are derived from the people.  Hence actual enforcement of the law was left in the hands of the local communities.

Vinayak Damodar Savarkar who coined the term, Hindutva said this regarding the matter:

Manusmriti, just like any other religious text, contains many contradictions. If we regard Manusmriti as divine, we cannot explain the contradictions. However, if we regard it as a historical document, we can easily explain the contradictions….our conservative friends would now realize how impossible it is to abide by the rules of Manu and regard his commands as valid for all times…. Whatever we find in Manusmriti to be harmful or ridiculous today should not be followed….(Excess of religious simple-mindedness” published in the February 1937 issue of ‘Kirloskar’)

The bulk of the Hindu reformers were of the opinion that the code of Manu needs to be invalidated. Also all major experts on Hindu traditions have clearly mentioned that the Manusmriti is not to be followed in the Kali Yuga, that is, our age.

As far as the RSS is concerned, these two statements made by the second and third head of the RSS, MS Golwalkar and Madhukar Dattatraya Deoras respectively speak for themselves:

Additionally, even their opponents accept the fact that the RSS is one of the very few organizations where caste plays no role.  Perhaps we can draw the attention of Comrade Yechury to this citation:

A similar, if less pronounced, pattern is true of the organisational wing of the Communist Party of India (Marxist)…..In both Kerala and West Bengal Untouchables are scarcely represented at the highest levels of the Party….In the governments led by Jyoti Basu between 1977 and 1982, “there were even more Brahmins than in the Congress governments, over 35 per cent; the number of Kayasthas (31 per cent) and Vaishyas (23 per cent) was almost the same as in Congress governments”. What was the share of the Scheduled Castes in Jyoti Basu ministry? Believe it — just “1.5 per cent”. If the “inferior ministers — ministers of state and deputy ministers — were left out”, it would be even “lower”. Stunningly, in Basu’s ministry in 1977 and 1982 “there was not a single Scheduled Caste member of the Council of Ministers”. Yes, not a single one despite West Bengal having the highest concentration of Scheduled Caste population in the whole country — almost 24 per cent (Census 1991).

Adding to the aforementioned citation is this portion from an old New Indian Express op-ed:

But the one area where Jyoti Basu combined the parliamentary and extra parliamentary tactics to keep the lower sections of society satisfied was land reform…..Thus, Basu secured land for the lower castes but reserved power for the upper castes…….

Because Comrade Yechury quoted some verses of the Manusmriti, let me return the favor by mentioning some notable statements of his Guru the great Karl Marx:

1. England has to fulfill a double mission in India: one destructive, the other regenerating the annihilation of old Asiatic society, and the laying the material foundations of Western society in Asia.  (The Future Results of British Rule in India.’)

2. I do not think anyone could imagine a more solid foundation for stagnant Asiatic despotism. And however much the English may have hibernicized the country, the breaking up of those stereotyped primitive forms was the sine qua non for Europeanisation. … The destruction of their archaic industry was necessary. (Marx letter to Engels, June 14, 1853: quoted in Joyce A.Ladner, 1998)

3. What was the profane basis of Judaism? Practical need. Self-interest. What is the worldly cult of the Jew? Huckstering. What is his worldly God? Money….The species-relation itself, the relation between man and woman, etc., becomes an object of trade! The woman is bought and sold. The chimerical nationality of the Jew is the nationality of the merchant, of the man of money in general. The groundless law of the Jew is only a religious caricature of groundless morality and right in general, of the purely formal rites with which the world of self-interest surrounds itself. (On the Jewish Question, Deutsch-Französische Jahrbücher; February 1844: written in Autumn 1843)

It is clear from the aforementioned evidence that Karl Marx held many views which were eerily similar to the ones held by Adolf Hitler—justifying colonialism and anti-Semitism.

Therefore, the Indian public should be more cautious of the Marxian CPM than the RSS which the followers of crypto-racist Marx falsely label as  ‘Nazis.’ Also it is easy to understand why the comrades are accusing the RSS of rewriting history, since it’s the left that has gained expertise on that field.

The Cultural Logic of Hindutva

Was Guru Golwalkar a Nazi ?