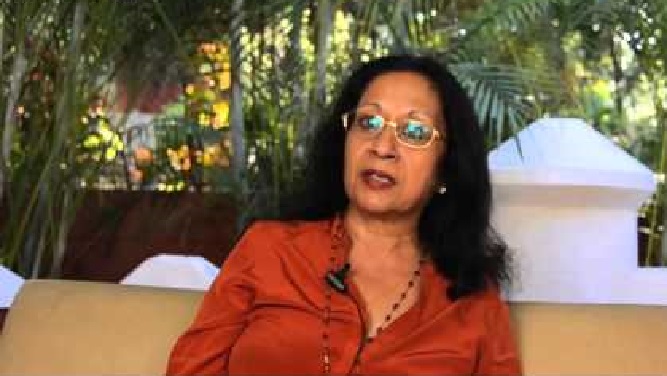 Good lord! Tavleen Singh is back with a vengeance against the RSS on an unprecedented scale. Of course, her venom is always couched as an “advice” to Prime Minister Narendra Modi as well as to Mohan Bhagwat.  To begin with, we can turn to the telecast of NDTV’s weekend show, ‘The Big Fight’ a well-known volunteer of the RSS, Sandeep Mahapatra said something on these lines:

This statement was best reflected in this op-ed in today’s Indian Express by Tavleen Singh where she pompously urges the RSS chief:

Please Mr Bhagwat, get back into your khaki knickers and return to Nagpur as soon as possible. You have already caused grievous harm to the Modi government, desist from doing any more. There can only be more harm if you continue to hog national headlines, because you are stuck in a time warp. Proof of this comes from something I wrote in April 1999 when the Fifth Column had moved temporarily to India Today. ‘Vajpayee’s government has taken a long time getting into governance mode… There was the problem of the BJP’s lunatic fringe trying to push its agenda. Conversions became more important than governance and swadeshi nearly succeeded in reversing the process of economic liberalisation.’

Is any further proof needed that the RSS has remained exactly where it was 15 years ago? This is why it became almost defunct until it crawled slyly on the back of the Modi government. And it will lapse back into obscurity if Modi fails to show that he is a prime minister who can live up to his slogan of ‘sabka saath sabka vikas’.

I am kind of confused at this claim; Taveleen Singh must know that the Narendra Modi she steadfastly backs, as well as the much respected CMs of Maharashtra and Madhya Pradesh, among many are proud products of the same lunatic fringe she loves to hate. Even the head of the 1998-2004 NDA administration, Atal Bihari Vajpayee, who the likes of Tavleen Singh have often lamented of being in the wrong party, was not only a Swayamsevak but even considered the fascist supremo MS Golwalkar his mentor, a feature he shares with present PM as well.

Now, now, Ms. Singh, if the RSS was stagnant, do you honestly think that a person of your viewpoint would have cheered for a tea-selling Swayamsevak to be the head of this nation’s government? Tavleen Singh gratuitous as ever, does have some more advice for the RSS:

It could have discovered that there was always more to India’s ancient civilisation than religion, and that as a ‘cultural’ organisation, it can help recover some of the things that have been lost. Great literature, rich languages, scientific knowledge, precise and spectacular understanding of astronomy and astonishing mathematical achievements. Having said this, let me add that if the RSS does start examining this magnificent heritage, it will need to employ the services of real scholars.

I do agree with Ms. Singh about the need for the RSS to be actively involved in academic matters, but as you know Ms. Singh, the Sangh and its leaders have never sought the privilege of rewriting Indian history. Now why do you think that a lot of Indians, who are not brainwashed into the fascist RSS viewpoint, are ignorant of India’s pristine heritage? You have actually given the answer here:

The Congress, in its long decades at the helm of India’s destiny has cultivated a particular breed of ‘intellectual’ assiduously. Those who fit into the leftist, liberal, secular category have been given Rajya Sabha tickets, Padma awards and other prizes and have been rewarded with Government jobs and houses in Delhi. The Government of India has enormous powers of patronage and the Congress learned long ago to use them very effectively. So if you are a ‘sarkari’ intellectual, you could find yourself in charge of any one of a myriad cultural and social organisations that come with low salaries but high perks. So if for instance you became head of one of the Government’s literary or music academies you would be entitled to a nice bungalow in Lutyens’ Delhi and a car with a red light on it…

And although you have documented this unevenness in Indian history in your ‘Durbar’, your op-ed makes it look as if your support for Narendra Modi had more to do with personal grievances against the Gandhi family than real appreciation for him.

There is no point in attacking Islam in today’s age because the repulsive murderers who lead the Islamic State are doing such a good job of it. Between ISIS, Boko Haram and Pakistan’s multi-tasking jihadi groups, Islam has become the most reviled religion in the world. It is to India’s credit that it remains one of the few countries in the world where Islamism has not so far reared its repugnant head in the way it has in our neighbourhood. Has anyone in Nagpur noticed?

[pullquote]Taveleen Singh must know that the Narendra Modi she steadfastly backs, as well as the much respected CMs of Maharashtra and Madhya Pradesh, among many are proud products of the same lunatic fringe she loves to hate. Even the head of the 1998-2004 NDA administration, Atal Bihari Vajpayee, who the likes of Tavleen Singh have often lamented of being in the wrong party, was not only a Swayamsevak but even considered the fascist supremo MS Golwalkar his mentor, a feature he shares with present PM as well.[/pullquote]

On that topic, Ms. Singh, please also remember these words of yours:

On my travels in other parts of the country I see signs of this new fanaticism and religiosity everywhere. From Kashmir to Kanyakumari, to use that old cliché. … The same sort of thing is happening in Maharashtra and there are madarsas in villages now that teach Urdu. In Rajasthan I have visited villages near Nagaur that look as if they belonged in Saudi Arabia. At a famous shrine near one of them I was astounded to see a board that spoke of how India was a land of darkness and superstition until Islam arrived. The shrine commemorated an Iraqi mullah who had come all the way from Baghdad to teach us barbarians about Allah’s message.

Now Ms. Singh were you mistaken then or are you mistaken now? And please show me one word of Mohan Bhagwat where he or the RSS declares holy war on Islam? I did not expect a veteran journalist of your stature to generalise all sorts of fringe elements and abusive twitter handles as being the torchbearers or representatives of the RSS. Using that logic shouldn’t you also be dubbed a loyal ‘Durbari’ since you were a prominent fixture in the same ‘Durbar’ for the bulk of your career?

And then, in her attempt to bring some objectivity in her otherwise contemptible piece, Tavleen shares some personal experiences:

There was a time when I regularly went to the morning ‘shakha’ in Delhi’s middle-class residential colonies. I went with the idea of researching Hindutva’s mysteries and discovered from my empirical studies that the average attendee at the RSS version of morning PT (physical training) was usually a fanatic with a gigantic chip on his shoulder. His motivation for waking at dawn to participate in very primitive martial exercises was a deep, deep hatred of Muslims. Many of the people I met over delicious post-shakha Punjabi breakfasts were people whose families had suffered because of Partition and their wounds had never healed.

Again, Ms. Singh I see gross generalizations on your part. And so let’s balance it out now by taking a brief look at what Pragya Tiwari, who is no friend of the Sangh, had witnessed in the dreaded Sanghistan that is Nagpur:

The office is as sparse as the security apparatus is beefy. A couple of children are playing on the grounds. A middle-aged pracharak apologises for the bookshop being shut and offers me water. He is warm and happy to host me despite not quite understanding why I am there. This warmth and openness characterises my meetings with every single senior RSS member over the next couple of days. They are generous with their time and happy to debate despite my hostile questioning. …. Particularly, MG Vaidya, a 92 year old Sangh ideologue and former editor of Tarun Bharat….Vaidya is a learned man — proud of his daughter-in-law who goes out to work and his wife who continued her studies until much later in life. He tells me he has gone out of his way to intervene whenever he has heard of a case of domestic abuse in his village. He believes inter-caste and inter-religious marriages are healthy. He is appalled that people would confuse Sanghis with the likes of Muthalik and the Ram Sene. “There are plenty of bars in Nagpur. No woman has ever been harmed here for going to one,” says he when I ask him if he thinks I should not be going out to get a drink once in a while.…Seemingly, no one I meet from the Sangh has anything against Muslims either, “as long as they stand up for their country in the same way as Hindus do”. Unfortunately that is an idea of nationalism that leaves far too much to the discretion of those who enforce it…..On the face of it, the idea of a “Hindu icon” is also at odds with the Sangh’s philosophy. Contrary to expectations senior Sangh leaders don’t wear their religion on their sleeves.

Now unlike you Ms. Tavleen Singh I will not let this one testament be the final word on the RSS. Rather, I suggest like Sandeep Mahapatra did in NDTV, to the general public to find out on their own about the Sangh. Of course, it is also all to convenient for Tavleen Singh to hide the fact that it is the selfless RSS workers who are the first to land to lend a helping hand during natural disasters, accidents, and so on. Nor can she see the good work that thousands of Ekal Vidyalayas and charitable hospitals run by the RSS do across India.  But then, the Lutyens Durbar’s hatred for the RSS is both legendary and fanatically strong enough not to fade away. Small wonder then that this former Durbari finds it difficult to shake off her abhorrence for the RSS.