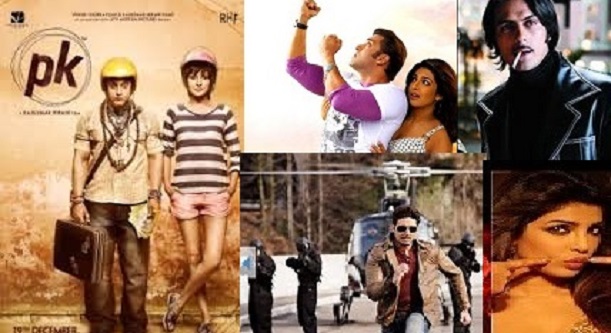 The collection of PK, manufactured or otherwise, is a record and the film’s been declared a blockbuster hit. While protests by some Hindu groups might have helped the film garner more publicity, the protests (sans vandalism) that happened are perfectly fine in a democracy. Talking down to these protesters like some of our left-liberals have done is actually going against the grain of free speech; but this is not the premise of this article. It’s not even about the pet peeves of Bollywood and its definition of entertainment. It’s a little more about us and our definition of entertainment. When we rant about PK, do we care to make a difference that will hurt? When we rant about mindless films making the moolah, do we care to change that equation? Or do we expect only Bollywood to carry the onus of bringing change? Do PLU – people like us – really care?

[pullquote]It’s just not about making films a commercial success though yes, that will spur the right kind of cinema to grow. It’s also about watching films that touch our hearts and sensitise our souls. It’s about changing our definition and consumption of entertainment.[/pullquote]

Are we watching films that appeal to our senses?

People like us increasingly watch films only to be entertained and not to be sensitised or take home a new idea, thought or insight. Any attempt to sensitise is seen as being preachy, too serious and a yawn. The result? We are getting what we want – candy floss romance for the oh-so-romantic, brawny stuff for the action buffs and comedy that often hurts sentiments. A few films, like “Queen” will come in and make a change, but mostly when you see the current state of our blockbusters barring a few, many fall in what I call the “junk food” category. And as we all know, nobody who gorges on too much of junk remains healthy for too long. Similarly, our Hindi film diet too, is becoming like junk food – unhealthy and that which has unfortunate consequences in the long run.

But what are we doing to get B-town back into shape? While right now you might be searching Wikipedia and want to tell me of the “good” films made, let me tell you I am a film buff as much as you. I watch a lot of these mindless films but wisely on TV (saving my precious money and time) and the good ones in theatre. And this is the point I want to make. When I watch these good films, the theatres are rather empty. So when we outrage about good films not being out there, are we being honest in our criticism? Or are we being mere armchair critics? Along with the entertainment genre, which often translates into “leave your brains at home to watch”, are we also watching films that appeal to our senses and sensibilities? I think not; or maybe not enough. And that is the travesty of the situation. This not enough, it needs to change.

An average PK will spin money at the BO, while a good Marathi film like Lokmanya may just about get good reviews. Imagine if all those in Maharashtra watched the latter with equal zeal, just to know about our history and about the man who helped us win our freedom. Multiplexes would be forced to increase shows and would have given PK a run for its money. While I cannot say for sure which film would have won the race, we, the people, would have ensured that another good film would have its audience too and would make money too. The ripple effect of such an action can only be positive and encouraging for filmmakers who want to do the different.

I watch a lot of Marathi films, so let me restrict this piece to Marathi films vis-à-vis Bollywood. I am sure there are other regional good movies, which may not be “hit” films, but often meet the same fate of getting rave reviews and then fade into oblivion. I am often given various reasons why people prefer B-town films to Marathi films. While some of the reasons are valid, I found two reasons which most spoke of and can be contested. Here they are:

These critically good films are often too boring, art house types and grim: This is the common refrain of those who consume the B-town staple diet of masala films at exorbitant rates and later also crib that it was so boring. Let me tell you that after watching these small budget, realistic Marathi films, it beautifully shattered this myth of “real films are boring.”

[pullquote]An average PK will spin money at the BO, while a good Marathi film like Lokmanya may just about get good reviews. Imagine if all those in Maharashtra watched the latter with equal zeal, just to know about our history and about the man who helped us win our freedom. Multiplexes would be forced to increase shows and would have given PK a run for its money.[/pullquote]

Watching different stories about people and issues woven so creatively, I no longer crave to see only razzmatazz and beautiful people. These stories made me game for the grim (like the story of 72 Miles – Ek Pravaas and Sat Na Gat), they made me laugh when I saw Harischnadra Chi Factory or Narbachi Waadi and these very real stories often made me introspect, like when I saw Anumati and Pitruroon. These were the so called different films (and I can name so many others – Shwaas,  Jogwa, Natrang, Bal Gandharva, Rama Madhav) that were based on a variety of topics and made one know about the India that exists and that we so conveniently ignore. Are any of these outcomes even close to boring?

We see reality all the time, so let’s get out of it for two hours at least. This is the second most common reason given for not watching these films. Well, some years back I’d at least try to find reason with this argument. That was the times when the economy was closed and salaries were modest. Films gave one a reason to break free from the real world. That said, those were also the times when masala films spoke of very real problems and yet became hits too – Deewar, Zanjeer and others come to mind.

However, in the present time, the way the multiplex tickets are priced and observing the crowd that watches these films, I am pretty sure that most who watch these films are not leading grim and sad lives. I am not getting judgemental here. What I am merely saying is that most in the multiplex audience lead reasonably good and comfortable lives, which is not a bad thing. Which makes me convinced that if they watch films on some disconcerting theme for under two hours once in a way, shouldn’t it be fine? And as I said not all arty type, offbeat and realistic films are boring.

It’s people like us who need to rethink what we are watching to make a difference to the entertainment sector. Else we almost come across like the SoBo Mumbaikars, who light candles for any social cause, but have the lowest voting percentage. So just like we deserve the government we vote for, we deserve the films we see. It’s that simple.

[pullquote]We see reality all the time, so let’s get out of it for two hours at least.[/pullquote]

The best and recent example of people deciding the content is the recent spurt of love for the Zindagi channel – which apparently has some awesome stories from across the border. I am not too sure of the revenue, but almost everyone I spoke to who is an avid TV watcher has good things to say about serials aired on this channel So, if you give something good, people will watch. If you as an audience dump an idea, the filmmakers will not make it, which is why so many serials go off air, so many have timings shifted and many others are just abruptly cut. So it is with movies – the themes of majority of films are based on what we choose to consume (and that includes item numbers). So, shouldn’t we choose wisely?

When I was growing up, Doordarshan would show regional films on Sundays and my entire family watched these films with subtitles. Honestly, I do not know if that still happens. If it does, I promise I will resume watching DD. But, thanks to DD, back in the 80s, I saw some very good regional films. Through them I subconsciously ingrained the language and culture of the people those films spoke about. It gave me a glimpse into parts of India that I had never been to and I was made aware of customs that I had never seen. But, most importantly, the experience taught me the value of patience. Being patient often results in good things. So as I patiently watched those films week after week, though initially, it did seem like an effort to understand, but slowly and surely, the visuals and the story bound me so much that I began looking forward to regional films on Sundays.

When was the last time I did this? When I watched Mungaru Maley (Yes, I never said love stories cannot be good) on a Kannada channel many, many months ago. And that fills me with guilt. There are so many films out there which are brilliant, made well and have great stories. They may not be in a language we know, but they are our films. They are about people who live in our motherland. Shouldn’t we all be looking to see those films? Shouldn’t we be watching all the good films out there and make them hits too? Yes, Hera Pheri became a DVD hit – so all hope is not lost. We can still buy the good films and make them DVD hits.

Lastly, it’s just not about making films a commercial success though yes, that will spur the right kind of cinema to grow. It’s also about watching films that touch our hearts and sensitise our souls. It’s about changing our definition and consumption of entertainment. When did we last try to do that?