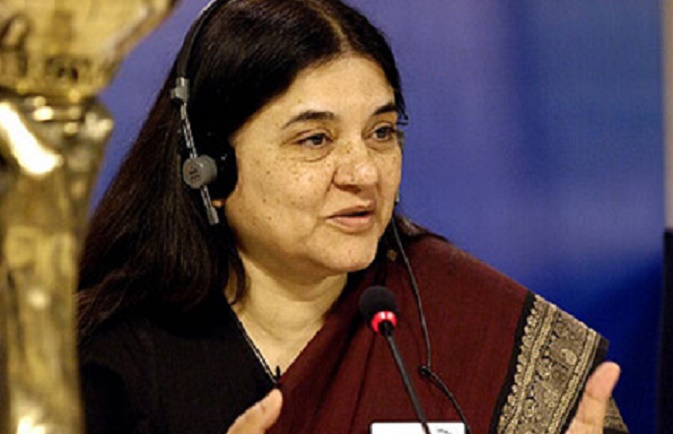 Maneka Gandhi took charge of the Women and Child Development (WCD) Ministry on the back of a massive electorate mandate that rejected the left-liberal politics out rightly. She gave a hope that finally the WCD Ministry would be freed from the clutches of radical leftist feminists and some semblance of fairness would be restored in formulating the policies in the larger interest of the society. Maneka had organized a Q & A session with citizens on 1st June 2016 at 9 AM on Facebook and lot many questions were asked by different people.

One such question that was asked was about how her ministry plans to give preferential treatment to women suffering from diseases like cancer, cardiovascular diseases, HIV/AIDS, when such treatment was not under her ministry. She replied that her ministry would work with the Health Ministry to implement it.

When there was a question about the rapid increase in the dropout rates of boys from schools and the fact that more girls are now graduating from our colleges/universities and the minister was asked what are her initiatives to curb the discontinuation of boys’ education, she replied with a SHOCKING answer that ‘(The issue is) NOT UNDER ME’.

When she could work together with Health Minister to implement something for women, why couldn’t she work with HRD Ministry to help the boys continue their education? This reeks of a particular bias or indifference towards the issues of boys. She had already displayed insensitivity towards boys, when she reduced the age for prosecution of boys under Juvenile Justice Act, despite of opposition from the various Child Rights groups.

The fact is that the WCD Ministry has historically ignored the issues of boys and is incapable of doing justice to the cause of children. More than 25% of the nation’s population is under 18 years of age and it is high time that a separate ministry is carved out for the children. Since children are not a vote bank, no political party takes up their cause. Feminists have negatively influenced the gender discourse in India by portraying victims as always being young women and perpetrators as being men. The abuse of senior citizens, for example, or the excesses by daughters-in-law have not been given due importance. In fact, the Women’s Commission of West Bengal has openly stated that their mandate is not to support mothers-in-law.

Maneka did make the right noises initially, by suggesting a law to help support mothers-in-law against abuse by daughters-in-law. But soon her rational approach towards gender issues seems to have vanished, and thus exposing her lack of conviction regarding the issue.

Maneka now seems to be pursuing a leftist agenda. With regards to vision, the electoral mandate from the citizens was towards a centre of right government. The whole discourse in our society has shifted towards women’s safety considering the fact that in any election the actual number of votes from women outweighs the votes from men. Hence, political parties now pursue a women centric campaign.

Well, Maneka should have known that if the voters (females included) wanted a completely radical feminist policy to be adopted, then they would have voted the Communist parties to power. She appears to have forgotten about her thoughts on protecting mothers-in-law from domestic violence committed by their daughters-in-law and is adopting policies that would fuel gender war.

Encouraging gender-war, destruction of family system, hounding husbands, denying access of children to fathers and grandparents, underscoring misuse of law by women, encouraging gold digger women, etc.– these are precisely the things falsely packaged as progressive and liberal that the voters of India had rejected, but WCD Ministry still seems to be run by UPA govt.

Now, the fact is marital rape is already criminalized under the Protection of Women from Domestic Violence Act Section 3(ii) and IPC Section 498a, wherein the husband can be put behind bars, thrown out of his house, a restraining order passed against him and also be made to pay the wife a monthly maintenance, all on a mere complaint of marital rape by the wife. Instead of highlighting this fact, the ministry indulged in giving absurd arguments over why the exception under Sec 375 should not be removed, thus constantly creating chaos.

If that were not enough, she has come up with a National Policy for Women, which may end up triggering a gender war. Among the other things, it states: preference to be given to women patients in cases of treatment for HIV/AIDS and to female disabled persons over their men counterpart. This differentiation of patients and disabled people based on gender is purely a policy of discrimination. One of the major points in the National Policy for Women is to introduce sterilization of men as a means to protect reproductive rights of women.

Now any mention of sterilization reminds one of the Emergency Era, where Maneka’s late husband Sanjay Gandhi was accused of indulging in forced sterilization. Will Modi government encourage forced sterilization of men? Do stalwarts of BJP like Advani, who were so opposed to Sanjay Gandhi, approve of this proposal? Such a proposal from Maneka is absolutely ludicrous and an infringement of the human rights of men. To be fair to her, she has denied that she advocates any forced sterilization in her interaction on Facebook, but how else is this going to be implemented differently from now? There are many more such proposals and readers can give their opinion for amendments.

This is not the first time that Maneka has given frivolous statements. In the past, she had made statements like ‘All violence is male generated’ during her Facebook interactions. To her credit though, after her ‘Not under me’ comment created a furor, the next day she appeared to correct herself and patiently answered many questions. But still the line adopted was more generalization and statements like women don’t want their marriages to fail, so they won’t falsely complain; shared parenting law is already present; every law is misused; mothers-in-law have protection under law; men don’t need protection laws; etc. make her seem far-removed from reality.

Earlier on the first day, she had ignored questions regarding mothers-in-law protection and children’s right to shared parenting, but answered questions about protection of Cows with detailed solution. That makes one wonder, whether she truly is where her heart lies? She has been known to be a champion of animal rights and if she is more interested in rights of animals than boys & older women, then it would only be better for her and everybody else – especially the animals & boys – that she is shifted to ministry of her interest.

Undoubtedly, she would not discriminate between male animals and female animals as animal rights activist, but she tends to discriminate against boys as WCD Minister. She has come up with a meme that says ‘Both daughters and sons are a joy to have’, but it seems more of a damage control than genuine concern, considering the reactions she received. For now, men and boys have to live with the three magical words said to them by the Women and ‘Girl’ Child Development Ministry – ‘NOT UNDER ME’.

Amit Deshpande is an engineer by profession and misandry within the society has made him determined to expose it unabashedly. He is currently President of Vaastav Foundation, Mumbai which is an NGO working for men's rights that runs a helpline exclusively for men. He has co-authored researches on Suicides of men with a PhD scholar and has also appeared on TEDx Talk.