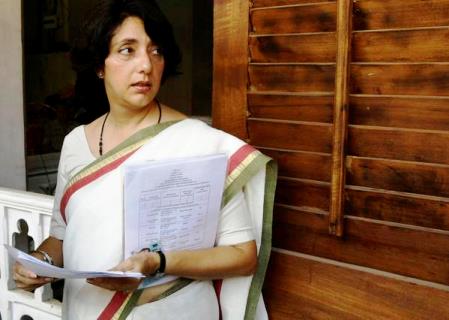 There is an interesting term that was perhaps coined by Lenin—‘useful idiots.’ It connoted the intellectuals who were seduced by the mendacious claims of communism and who sympathized with the ideology. Unaware of the real nature and goals of Bolshevism, these credulous grandees bestow considerable respectability on the political philosophy that was responsible for the death of over 100 million people. This is what made them idiotic, while their usefulness lay in promoting the vicious ideology. Evil, be it socialism or militant Islam, has meretricious charms, to which many well-meaning people fall. The latest victim could be CEO & chairperson of RBS India Meera H. Sanyal.

She could be the Aam Aadmi Party’s useful idiot because her own beliefs are poles apart from those of AAP’s. One of the principles that she cherishes, as per her website, is that one should prosper on the basis of one’s “own enterprise and hard work.” This is in consonance with classical liberalism. But it is astonishing that Sanyal chooses to ignore the AAP’s disdain for philosophy of liberty. Its Vision Document reeks of dirigisme, the antithesis of freedom. Further, party ideologue Yogendra Yadav has admitted that the AAP believes in socialism, and its two decisions, on free water and subsidized electricity, leave no doubt about its creed.

In a recent interview to Business Standard, she said,

I believe this [corporate bosses joining politics] is a very positive development. Up to very recently, politics in India was considered a dirty business—and therefore people with ideals, integrity, and competence eschewed it. India needs good leaders and honest and competent administrators—and we have several such talented people in the corporate sector. Their entry into politics is a very healthy and encouraging sign.

Inasmuch as attracting “people with ideals, integrity, and competence” to politics is concerned, AAP leader Arvind Kejriwal deserves full marks. But the question is: what would these people do? She said, “I look forward to contributing to the formulation of AAP’s economic policy and manifesto.”

But this begs the question: contributing to what? It would be good if she is able to engender a paradigm shift in the AAP’s economic philosophy. The danger, however, is that she might end up like Nandan Nilekani: instead of bringing in corporate competence in governance, the former Infosys chief has become a key figure in establishing postmodern feudalism in the country. He has not helped to bring down the size of government—in fact, the paraphernalia under him has augmented the size and scope of government, and it is another drain on the exchequer. Worse, he is trying to perfect the system that would transmogrify a large section of citizens into serfs, perennially looking for succor from the state.

The AAP’s Vision Document, though silent on the specifics, gives enough indications that it would increase rather than decrease state intervention in the economy. “Privatization of this [water supply] is inhumane and unconstitutional.” Yet, Sanyal believes that the party’s “policies are pragmatic and favor enterprise and education, and focus on decentralized local governance and grass roots accountability.”

The AAP’s Vision Document also says, “Water, Forest, land and all natural resources should be under local custody. Natural resources of the country are national wealth. This should be used for the development of the population. It should not be used for private profit of individual companies.” This means bar on private sector participation in mining; in fact, taken to its logical conclusion, it would lead to the nationalization of private companies in the sector. But, in her website, Sanyal says,

An economy built on broad personal ownership and the freedom to make contracts, stimulates enterprise and initiative and encourages people to take responsibility. It is the economic model that provides the greatest space for people’s freedom and prosperity.

Like any decent citizen, Sanyal believes in the rule of law. Unfortunately, this is not shared by her party colleagues, including Kejriwal. He, Manish Sisodia, and Prashant Bhushan have campaigned for Binayak Sen, who has been convicted of helping the murderous Naxalites. Further, Kejriwal has been no different from other political parties when it comes to Muslim appeasement. He has questioned the Batla House encounter and sought an inquiry, despite the fact that the Supreme Court, the Delhi High Court, and the National Human Rights Commission did not find anything fake about the shootout. He also sought favor from the notorious cleric who had made a call for Taslima Nasrin’s death.

Such nefarious behavior obviously militates against a principle Sanyal believes in: “In the matter of religion the state should adopt the policy of dharma nirpekshta” or neutrality towards religion.”

In a nutshell, Kejriwal & Co. stand for everything Sanyal is opposed to. I hope against hope she is not indulging in self-deception. If she is, she would become a useful idiot. The only consolation in that case would be that she would be in the company of such personages as George Bernard Shaw, H.G. Wells, and Keynes.