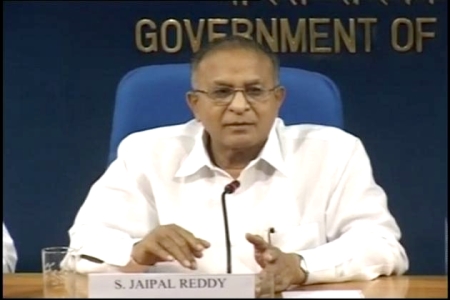 One of the myths that have grown in the last two years is that S. Jaipal Reddy is an upright minster who was removed from the Ministry of Petroleum & Natural Gas (MoPNG) because of pressure exerted by the Mukesh Ambani-owned Reliance Industries (RIL). According to the dominant narrative, the honest Reddy was replaced by a supple Veerappa Moily. The fact however, is that Reddy was the biggest benefactor of RIL.

But let us begin with the process that made a martyr out of a minister whose innings at the critical ministry was synonymous with incompetence, unimaginativeness, and sloth. Two men played a key role in the myth-making—the professional revolutionary known as Communist Party of India leader Gurudas Dasgupta and that compulsive liar, Arvind Kejriwal. In a letter to Prime Minister Manmohan Singh, Dasgupta wrote, “I am raising a specific question that Reliance Industries Ltd had a role in the removal of petroleum minister Jaipal Reddy.”

On his part, Kejriwal said very nice things about Reddy: “Jaipal Reddy is considered to be an honest minister and was removed.” Considered by whom? But then nobody can dare to argue with Kejriwal, for if they tend to disagree with him they would be immediately dubbed as the puppets of the Ambanis, Adanies, Narendra Modi, etc.

Dasgupta and Kejriwal believe, or at least want us to believe, that Reddy, a socialist, was penalized because he dealt firmly with RIL. In the Orwellian world that the Dasguptas and the Kejriwals have conjured up, villains are as much in demand as are heroes. Narendra Modi, the power distribution companies of Delhi, ‘crony capitalists,’ etc., are there to be flogged to keep the mobs in high spirits. But what about the heroes? Well, if there aren’t any, the anarchists and commies will invent them. ‘Mr. Clean’ Reddy was such an invention.

The papers that I have in my possession, however, tell a different story. According to a report by the Comptroller & Auditor General, Reddy proved to be a big benefactor of the Ambani company by offering it an escape window.

At the heart of the issue is the failure of the MoPNG and the Directorate General of Hydrocarbons (DGH) to properly penalize RIL for the sharp decline in gas output from the KG-D6 block after early 2011. The DGH wrote several letters to RIL between February 2011 and April 2012 about the decline. But neither the DGH nor the MoPNG took any action against RIL. According to a CAG note, despite the “default” the authorities did little “other than issuing letters to the operator.” All along, Reddy was the Petroleum Minister.

Worse, the then MoPNG Secretary G.C. Chaturvedi provoked RIL to file arbitration. In November 2011, he publicly proclaimed that his ministry would bring cost-recovery in proportion to gas output. At that time, the recovery was 100 per cent; a restriction would mean reduction in revenue. Within a week, RIL served the government an arbitration notice.

On the face of it, the MoPNG acted tough; and, as a consequence, Minister Reddy was able to create an impression that he was a no-nonsense chap who doesn’t buckle under pressure from the country’s largest private company. The impression was strengthened when he issued a notice for proportionate disallowance of cost of production facilities amounting to $1.005 billion up to 2011-12. Apparently, Dasgupta and Kejriwal were impressed; the CAG, however, is not.

The truth is that the only penalty possible is the termination of contract. In fact, the MoPNG had admitted this in no uncertain terms before the Parliamentary Standing Committee on Petroleum & Gas: “It is not penalty as such… Default is punishable only by termination of the contract. There is no other remedy.”

By serving the arbitration notice, the company earned immunity for its contract. As Moily explained to the Prime Minister a recent letter, the government cannot end RIL’s contract for the D6 block before the two-year-old arbitration case is over. In short, the supposed toughness on the part of Reddy proved to be a boon for RIL, notwithstanding the lies and propaganda of the Dasguptas and the Kejriwals.

Hinduphobia of The Caravan