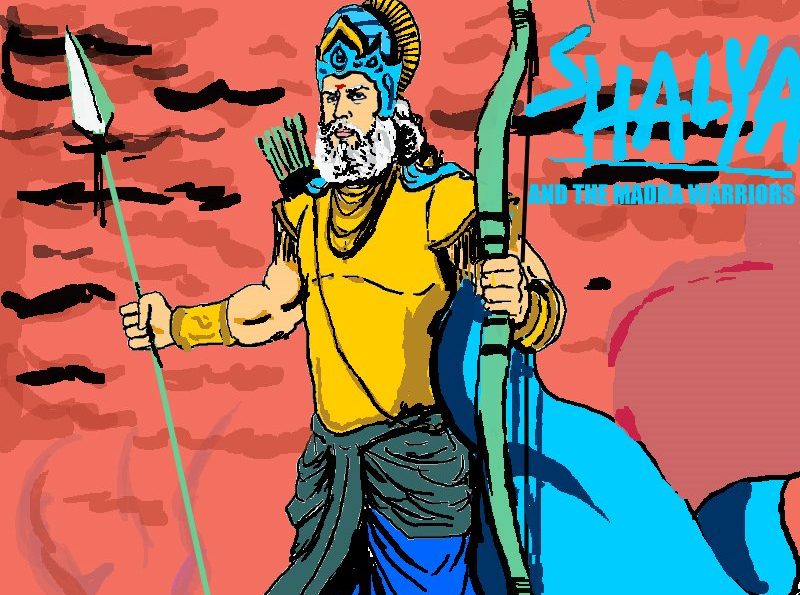 Whenever, one’s position gets endangered, it is natural to get indignant. I could feel the same anger in Devdutt Pattanaik‘s latest article critiquing PM Modi’s choice of Shalya to paint the opponents. There are two factual truths one could give it to the author – the observation that ‘Shalya’ search has shot up and that “mythological examples are complex and need to be seen in context”. For a moment, let us focus on the author and not the question why Modi may be right or wrong about the use of word Shalya.

Let us first counter the choice of words which the author uses to gently twist and mask the words and incidents to provide his own narrative. He uses the word battalion instead of Akshauhini. One Akshauhini is 21,870 chariots with matching numbers of war elephants, 65,610 cavalry and guarded by 109,350 foot soldiers. There is no English equivalent word. Hence substituting the word battalion shows a lack of either proper understanding or vocabulary on the part of the author. It is akin to calling dosa as a crepe or thin pancake. Using cheap substitutes of Sanskrit terms for non-translatables, which the author specializes – the one who thinks as the only one who has decoded Vyasa in his book, Jaya, is very ironical.

Let us also now focus on the next big factual blunder by this Jaya author. The author asserts – “Shalya was the last commander of the Kauravas. In his watch, Duryodhan is finally killed.” The author has a track record of twisting Vyasa’s narration and replacing it with his own version. He must understand that Mahabharata retelling does not mean creating his own Harry Potter version. Shalya was most definitely not the last commander of the Kauravas. It was Ashwatthama. Does this reveal the author’s ignorance or over confidence in writing his own concocted fiction?

The second blunder in one line – he claims Duryodhana is killed in his watch. First, by the time Duryodhana is engaged by Bhima in his mortal combat, Shalya was already dead. So how could a dead Commander keep watch over Duryodhana? Second, Duryodhana is mortally wounded and left to die a slow death. Ashwatthama, Kripa and Kritavarma, the three main warriors, left on the Kaurava side approach him. Ashwatthama plots a very dastardly plan and kills the sleeping Pandava warriors with the exception of the Pandavas, who were protected by Krishna’s grace. Only and only after hearing the death of the Pandava army does Duryodhana breathe his last. Even Duryodhana agrees that this was a terrible deed.

Shalya is definitely a complex character. His love for his nephews did not die with the trickery he fell for. Unlike Yuyutsu, Dhritarashtra’s son, who switched to Pandava side for the sake of Dharma, Shalya was forced to fight on the wrong side because he was observant of Dharma, only at a lower level. Devdutt is very partial in portraying Shalya as only hurting Karna. Any person who has cracked open Mahabharata, not the deluded versions sold using Sanskrit names, would realize that though Shalya begins as a nagger of Karna, he has a change of heart. Shalya spends the first day attacking Karna psychologically, but as the King saw how Karna was pouring all his heart in the war, the true Kshatriya in him came out uncontained.

The valiant Karna, despite using Shalya, never trusted the wisdom of his advice. Just like a wicketkeeper gives useful tips to the bowler in modern day cricket, the role of a good charioteer cannot be understated. Perhaps the earlier sarcasm of Shalya’s verbal barbs made him untrustworthy. Shalya correctly advised Karna to aim the Nagastra, which had one use, to be focused on Arjuna’s chest. Karna’s ego clouded his wisdom and he aimed at Arjuna’s head. Krishna was able to protect him by pressing his toe, thereby altering the target to Arjuna’s crown. Karna for some weird reason continues to worry about his sunk chariot wheel instead of jumping to the other backup chariots that follow a commander. One must not forget he was a Maharathi.

If Shalya was so untrustworthy, why did he end up as the second last Commander-in-Chief? Shalya puts up a valiant fight only to be killed by Yudhishtra.

The author, over the years has constantly attempted to malign the scriptures with his horrible, deliberate misinterpretations. He has used misinterpreting Sanatana Dharma in a scandalous way as a career, yet trying to come out as a self-certified original interpreter of scriptures. This conundrum comes to the fore every time, he writes or speaks. This dichotomy is usually referred in the Indian context as Shalya. Shalya is caught internally more than the external. Devdutt is representative of this Shalya syndrome. Is it surprising that when Modi used the term for his opponents, we find Devdutt’s outrage? The title truly belongs to him – the true real modern day Shalya, who is caught peddling lies as real interpretations and twisting scriptures as if it were fairy tale, every time.

Does this mean Devdutt who has appointed himself as the sole correct interpreter of Mahabharata be allowed to proliferate his decades of canards, perfidy and pusillanimous assault on Sanatana Dharma? The fact that majority of Hindus never take time to read the scriptures in original or listen to authentic explanations from traditional scholars is the only reason why such distortions continues. When we take time to read scriptures, we can spot the real Shalyas with the greatest ease.

Is this attack on PM Modi by this Wendy’s Child, Devdutt, due to the bitter aftertaste of the government rightly keeping him at arms’ length?