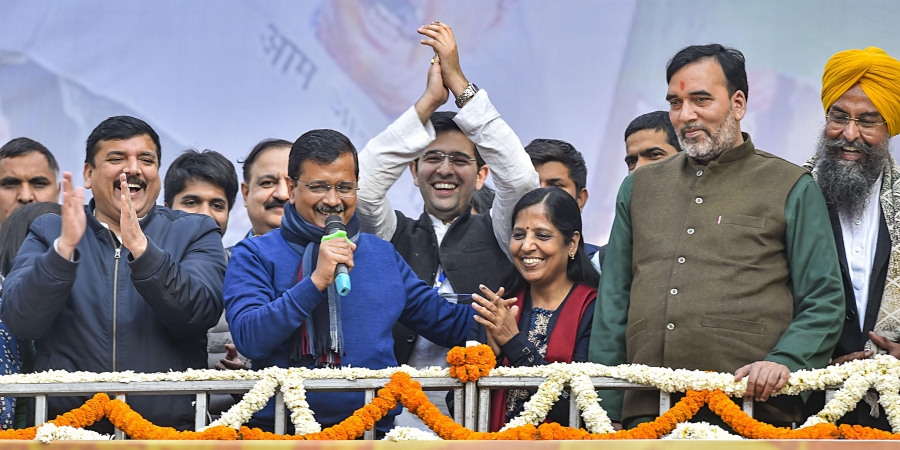 The Delhi election mandate has given the traditional Modi-bashers and the secular brigade a plenty of reasons to cheer. As one analyses the poll results and tries to look at things that will unfold, it may not be wrong to suggest that no one has been a bigger cheerleader for Arvind Kejriwal-led outfit than the Congress party itself.

The marginalisation of Congress actually has made AAP’s task easier. The irony is the Muslim voters were helplessly drawn towards Kejriwal’s party and thus nominal increase in BJP’s vote share from around 32 percent to 38.5 now could not save the day for Amit Shah’s and hardliner style of campaigning focusing on Narendra Modi as the sole vote-getter and hyped ‘nationalism’ as the election issue. The mandate proves – people in Delhi were more concerned about free electricity and free water and semblance of good governance they saw under Kejriwal.

A question going round the town – post Delhi polls is – Can Kejriwal now take on the unassailable Modi-Shah duo at the national level?

“The Delhi results show Kejriwal is the leader now who can take on Modi. Thus, AAP’s national plans definitely got a morale booster?,” remarked Shoaib Iqbal, newly elected AAP legislator. Iqbal – of course – is city’s best known turncoat politician and he has been associated with Janata Dal and Ram Vilas Paswan-led LJP in the past.

The Delhi polls definitely have some ‘lessons’ for the BJP. The easiest way of summing up the complex and paradoxically challenging situation for the saffron party is that Kejriwal ‘banked’ heavily on soft Hindutva to retain his hold in the city. Closer studies and deeper interactions with voters and stakeholders in the BJP reveal that the minority voters simply stood away from the saffron camp this time. This made a huge difference.
Of course, it is not the first time that a big hype is being created around Kejriwal’s persona vis-a-vis ‘counter Modi mission’.

Such was the impact of this media creation that ambitiously Kejriwal had resigned as Chief Minister in 2014 and went to Varanasi to fight Modi. The move had boomeranged. Similar hype created around Kejriwal once again after the 2015 Delhi assembly polls too was short lived. Kejriwal also harboured illusion and more often indulged in Twitter wars with BJP and often made personal attack on Modi.

However, he gave up these practices and today he would not regret his matured thinking that mere confrontation will not take him far.

But what should worry the saffron party strategists in 2020 is the fact that till now Modi had no rival for ‘mastery over Indian politics’. But Kejriwal could be emerging and there are reasons.

In Delhi, BJP has no match to Kejriwal and perhaps should focus on rediscover ‘talents’ among youngsters and new faces. In retrospect, leaders like Dr Harsh Vardhan could have been given more responsibility and importance in Delhi polls. And all old faces the likes of Vijay Goel should be shunted away from the city.

Moreover, in 2014 and 2015, Modi was not ‘tested’ as much as he is today.
The country has reposed faith in Modi in two subsequent Lok Sabha elections and in 2019 gave a record 303 (number of seats) in Lok Sabha. They trust him more than anyone else on national issues including fight against terror or dealing with Pakistan.

Now comes a key aspect of Delhi poll results, the Muslims knew voting for Congress was meaningless as the grand old party has lost trust of the majority community. AAP’s ‘soft Hindutva’ and Kejriwal’s ‘Bharat Mata Ki Jai’ and ‘Jai Hanuman’ slogans have done all the difference.

It is given to understand easily that Prime Minister Narendra Modi and his poll strategists have always thrived combining ‘Hindutva’ and development cards; here Kejriwal seemed to have diagnosed the malady in secular brigade and hence he never felt ashamed of his Hindu identity. This was a case compared to Late prime minister Chandrashekhar – who during the height of Babri Masjid dispute, L K Advani’s arrest and Mandal politics — had announced: “I am proud of being a Hindu”.

In terms of Congress and temple runs, we know the grand old party has benefited in Rajasthan and Madhya Pradesh in the past but in Delhi, the same benefits went to the AAP. In Chhattisgarh assembly polls in November-December 2018, Ajit Jogi’s party and BSP had to eat a humble pie and Congress could storm back to power ousting BJP after 15 years.
The AAP observers must not miss the vital point that Kejriwal tried to play up the twin cards of ‘soft Hindutva’ often laced with emotional appeal “I am Delhi’s eldest son” and of course that of a ‘performer’. Modi’s image of a ‘catalyst of change’ got a serious challenge! But soft Hindutva point scoring was tactical. In state polls, earlier, KCR-led TRS has reaped such benefits in Telangana.

“The AAP was perhaps the only party in the opposition camp which supported abrogation of the Article 370 in Jammu and Kashmir in August 2019,” says a long time Kashmir watcher. But to say whether Kejriwal can do well at the national level and take on Modi depends on many factors – and primary one is that the AAP needs to expand base in several states. While secularists and AAP remain ambitious, there is no denying the fact despite goodwill and initial good starts, the party had failed in Punjab.
In Haryana, it was said Kejriwal himself was insecure as his erstwhile colleague Yogendra Yadav could have stolen limelight more than him. Democracy’s ‘son’ Kejriwal and secular media’s darling – of course – has thrown out Yadav and Prashant Bhushan from the party. Check out Bhushan’s bytes — he had said they were ‘kicked out’ of the AAP.

For BJP and even for other parties, the political challenge will be mounting as Kejriwal’s new generation ‘model’ of development and good governance such as free water, electricity and Mohalla clinics will certainly have takers in other states too. The games in Bihar – later this year – with the able support of poll strategist Prashant Kishor and subsequently in states like UP, Punjab and Goa would be interesting.

In retrospect effect yet again, Amit Shah, who anchored BJP’s poll campaign and strategy might have erred in having faith in Manoj Tiwari, a Bhojpuri singer-film star and also an import from Samajwadi Party. On the other hand, for AAP, the community-wise identity politics suited it as Kejriwal himself is a Baniya. A large number of Jains and Hindus who form Baniya community overwhelmingly backed AAP unhesitatingly. They perhaps even grew abhorrence of the idea that will BJP make ‘a Bhojpuri’ the Chief Minister of Delhi.

Delhi’s socio-political genre has been dominated by north Indians – essentially Punjabis, Baniyas and Jats. The saffron party’s banking on polarised politics of Parvesh Singh Verma (former CM and Jat leader Sahib Singh Verma’s son) also did not help much. In fact, in West Delhi – the BJP drew a blank out of ten seats.

Not to forget the challenges of economy and joblessness, the anti-establishment sentiments against Modi may not be easily restrained.

People in India do not only look for jobs – they also look for jobs nearer homes, they look for jobs where there is usual and old government variety of patronizing. They look for jobs with long lunch breaks; where hard labour is discarded, but there are all the ‘facilities’ and preferably with concessions and also some cushions of gifts and easy money (read bribes). Somehow, under Modi, the bribe industry is on decline if not vanished for a variety of reasons.

One of them is transparency through digital mechanism. Even railway reservation-berths cannot be ‘manipulated’ unlike yesteryears! The brinkmanship of ‘Jugado’ is fast becoming a dying art and this has angered many and including the ‘NGO force’. Top of it came Kejriwal’s offerings of ‘freebies’! Delhiwallahs do not know — how to resist !

Swati Deb is a New Delhi based writer and journalist.