Mohan Bhagwat is right: India is a Hindu nation 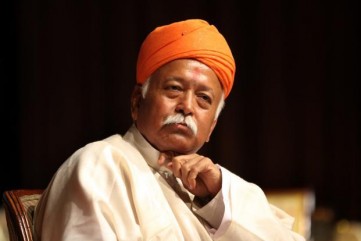 It’s that time of the year again. Actually, there’s really no time or season when this is concerned. Put another way, the more things change the more they remain the same. Narendra Modi’s blitzkrieg campaign as well as his current position as the country’s Prime Minister did two things effectively: one, he set the agenda and two, he decisively demolished the collective received wisdom of nearly 70 years. A big part of the latter is the fact that he has rendered the English media redundant. Those in this media universe centred in Delhi whose voices are the loudest have been rendered voiceless. The daily dose of said loudness is delivered even now from their TV studios but it’s now the shrillness of Shakespeare’s idiot in Macbeth.

With the Prime Minister reaching out directly to the people, the media, is now left desperately clutching at straws, waiting for that one crumb which will resuscitate their dominance as the sole, unquestioned arbiters of public opinion and the supreme judges on all matters ranging from the God Particle to the philosophical significance of Rahul Gandhi’s dimpled smile.

Normally, the least thing any person who is rendered irrelevant so monumentally will do is introspect.

Enter the RSS Sarasanghachalak, Mohan Bhagwat who in a recent speech claimed that:

For the next 5 years we have to work with the aim of bringing equality among all the Hindus in the country. All Hindus should be drinking water at one place, should be praying at one place and after their death, their bodies should be burnt at the same place.

…the whole world calls Indians as Hindus…like people of Germany are called Germans, of America are called Americans, people of Hindustan are called Hindus…it doesn’t matter what their food habits, language, where they live, or their religion is…they are Hindus.

This was the straw the media was looking for.

As we see, there is nothing innately “communal” or controversial in what Mohan Bhagwat said. If anything, the aim of bringing equality among all the Hindus is as sensible as it gets and is what the long heritage of Hindu saints and reformers have been telling. In fact, it is what the Leftists themselves have said at various points in time.

Yet, this is how the media editorializes Bhagwat’s statement—this is a sample from NDTV:

In one speech, Mohan Bhagwat, the chief of the Rashtriya Swayamsevak Sangh or the RSS, has delivered two political controversies.

The “delivered two political controversies” is clearly a conclusion that’s unsupported by anything in the content of Mohan Bhagwat’s speech. But the templatish media reportage did have the desired outcome: a flurry of editorials and opeds and commentaries began to flow almost immediately with the obvious objective—of tarnishing the RSS in a fresh bout.

If we take a look at the other side of the same media coin, here’s what we find.

For a more comprehensive list of such verbal gems, see this.

And what was the media reaction to such speeches? Radio silence. No angry editorials. No outrage. Not even a whimper of the word “controversial” let alone “communal.”

The accurate response from all fair, objective, and thinking people is to ignore an already discredited media’s spin over Mohan Bhagwat’s speech.

With that out of the way, we can focus on something more fundamental. While Mohan Bhagwat was right in terming that “Hindustan is a land of Hindus,” he should have gone a step further.

The soul of India is Hindu and nothing but Hindu. More accurately, the soul of India is Vedantic from whence derives the unique gift that India has given to the world: Dharma. It is this simple, truthful and historical reality that the Idea of India crowd has quite successfully distorted and hidden from the Indian consciousness. Both their idea and history of India follows the Islamic history diktat: everything in the history of a non-Muslim land before Islam parked its triumphant flag there belongs to jahiliya, the age of darkness, and must therefore be either derided and/or erased.

Indeed, we need not go too far. A peek at our neighour will suffice. A 2003-04 report by eminent Pakistani educationists, A. H. Nayyar and Ahmad Salim entitled “The Subtle Subversion: The State of Curricula and Textbooks in Pakistan” exposes in great detail how starting with Zia ul Haq, Pakistan’s English, History, and Social Studies textbooks underwent an Islamic overhaul with the result that:

…school textbooks have systematically inculcated hatred towards India and Hindus through historical revisionism. There is no mention of Islamic invasion and conversion of Hindus. Many texts give an impression that ancient Indian heritage was not destroyed by Afghans and Turks but Muslim heritage was destroyed by Indians.

As Sita Ram Goel and Arun Shourie among others have demonstrated, this template of Indian history writing is not too different in India as well. Our toxic history textbooks follow this same Islamic diktat to teach the history of India to Indian children. To quote the eminent scholar and demographer, Dr. J.K. Bajaj:

…these textbooks are designed to make a child hate himself…in any self-respecting country, the parents will go and burn the school if these kinds of texts are taught….this is mental persecution of the extreme kind…where in the world will children be taught in this manner about their own civilization?

To be fair, this sort of Indian “history” began as a colonial project, which was later perfected into an art form by the Nehruvian establishment. It both shames and denies the Hindus and their homeland the most fundamental aspect to any human being: identity. It confounds and distorts a sense of space and time for the Hindus—forget Hindus, no living creature can function without having a sense of space and time.

Indeed, if we observe the propagandists and supporters of this spurious Idea of India, it is clear that most of them are Hindus denying their own identity and taking pride in this denial.

This is a reality which the de-Hinduized Hindus—the secularists of various shades—know but deny what these other faiths themselves declare India to be. And this denial, as Dr. Bajaj and others have said, stems from a deep sense of self-hatred.

India has remained united despite severe threats both from within and without only because Indians still have—most unconsciously—anchored themselves to that innate Hindu soul. This Hindu soul finds expression everywhere even today—from laws, the administrative language, national symbol, the shared sacred spaces across India’s geography (and even beyond, in the immediate neighbourhood), clothes, eating habits, festivals, pilgrimage, Gods and modes of worship, music, dance, movies, idioms used in daily life, and in temples.

For all the secularists’ vociferous abuse of the RSS, they have failed to present a better alternative. They “alternative” they had so far, the Nehruvian model has been tried, nay, thrust upon the Indian nation for about 70 years. Even disregarding all other dire consequences that ensued as a result, the most disastrous outcome has been an enormous weakening of the nation’s most key component: internal and external security.

And for those mocking Mohan Bhagwat and the RSS for its concept of a Hindu Rashtra, a sense of history tells us this: India was a completely Hindu Rashtra until the first wave of Muslim invasions. After that, those Muslims in states ruled by Hindu kings were treated on par with Hindus, a luxury denied to the zimmi Hindus in places ruled by Muslim Sultans and Nawabs.

So yes, Mohan Bhagwat is correct: India is a Hindu nation. To those who find a controversy in that statement of a simple, verifiable everyday truth, a small suggestion might help: a visit to democratic Pakistan and a seminar/opeds professing the view about Pakistan not being an Islamic country.