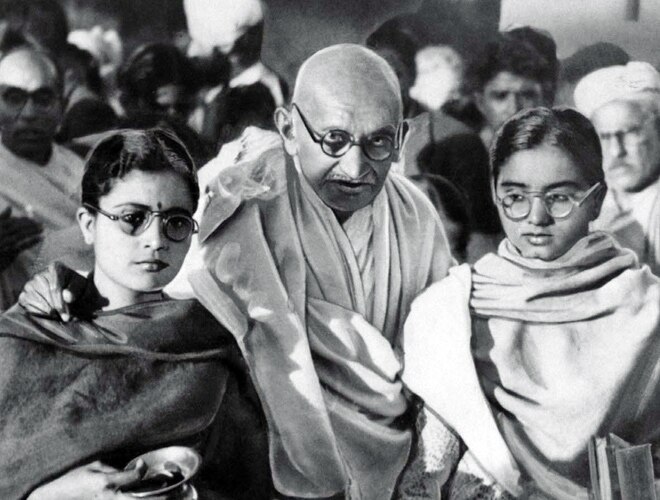 Mohandas Karamchand Gandhi, who later received accolades like Mahatma, Bapu and Father of the Nation, is usually associated with morality, ethics, self-abnegation, piety and self-control. Gandhi openly spoke about issues of sexuality to his followers and gave them advice on how to conduct themselves in both public as well as private. However often his advice bordered on extreme puritanism and aberrance. For example he asked married men to take a cold bath if they felt the urge to have intercourse with their wives. Gandhi talked about his views on sexuality and abstinence, and his corresponding celibacy experiments in great details. So much so, that Jawaharlal Nehru was compelled to describe Gandhi’s obsession as “abnormal and unnatural”[1] and insisted that Gandhi’s bizarre and deviant views on sexuality would “only lead to frustration, inhibition, neurosis, and all manner of physical and nervous ills”. Nehru further added: “I do not know why he is so obsessed by this problem of sex”.[2]

Gandhi got married at the age of 13. He took a vow of celibacy at the age of 38, after fathering 4 children. A major factor which contributed to Gandhi’s attitude towards sex and sexuality was an incident early in his married life. He was having sexual intercourse with his wife when his father passed away in the next room[3]. He was burdened with guilt that he was not there for his father and this guilt continued to weigh on him heavily. He pondered a lot on the issue of sexuality and self-control, and was heavily inspired by Jain seer Raychandbhai and Russian writer Leo Tolstoy (who was a celibate in his later life). Finally he developed his own thesis of sexuality, celibacy and abstinence based on Victorian puritanism and morality, along with an (incorrect) understanding of Hindu ideas of varnashrama dharma, brahmacharya and sexuality.

Brahmacharya which entails total abstinence form sex is meant only for Yogis and Sanyasis who have withdrawn from daily life and is not intended for lay householders[4]. Abstinence was never considered a virtue in Hindu culture which always laid stress on the ideals of purushartha – dharma, artha, kama and moksha. Kama which refers to desire, sensual pleasure, sexual pleasure and aesthetic enjoyment of life, is one of the four essential goals of human life as long as it pursued without sacrificing the other three goals. But Gandhi’s understanding of the topic was more narrow and extreme.

More than Dharmic traditions, Gandhi was influenced by Christian ideals of the Victorian age. Bharat Gupt says in this regard: “Gandhi had no direct acquaintance with ancient texts or even the scholars of his times. He was raised on a Vaishnavism of which he had a confused understanding—between the secular and the spiritual, and hence his very Christian and puritanical notions about food and sex.”[5]

Gandhi’s idea of religion, God, morality and sexuality were heavily influenced by Christianity. His speeches and correspondences are replete with Christian imagery. For him, Rama was similar to “father-who-art-in-heaven’ monotheistic God. He used to describe his prayer meetings as “covenant with God”[6]. In fact, Gandhi did not refer to female deities, because for him God was male whom he refers to as “He” in his works. Patrick French characterizes Gandhi as a product of late Victorian age in terms of his puritanism[7]. Therefore the psychological models that Gandhi developed to address the issues of sexuality, self-control and abstinence were baffling and unorthodox to say the least, and divergent from traditional Hindu models of Kama and Brahmacharya.

Gandhi would often sleep naked beside young women to test his restraint and resolve. He referred to these celibacy tests as “experiments”. His aim was to find out whether his organ would be sexually aroused while sleeping with his women subjects. He justified his peculiar version of celibacy as a moral and spiritual process to achieve union with God[8]. No Hindu text prescribes such actions on the part of the Brhamachari. One’s virtue was measured by his degree of control and not by abstinence, which was recommended only for sadhus and sannyasis who retired to mountains or forests or other remote places[9]. Hindu texts have no mention of the kind of abstinence Gandhi experimented with.

Gandhi believed in the potency of semen and would often complain about of frequent “involuntary discharges”. He often spoke about sexual topics with his followers. He believed that Indians should not marry at all, and that married people should not have sexual relationship with their spouse. In one instance, he advised newlyweds to stay celibate for the sake of their souls[10].

Gandhi’s views and conduct in this regard were frowned upon by many, and his suggestions were met with a great deal of skepticism. So much so that, Sir C.P. Ramaswami Iyer the pre-independence Prime Minister of Travancore described Gandhi as “a most dangerous, semi-repressed sex maniac”.[11]

Gandhi equated sex with lust. For him birth control measures were a legitimization of lust. Sex, as far as Gandhi was concerned, was meant primarily for procreation. He wanted men to control their animal passions and women to resist men[12]. Gandhi set up ashrams where he made strict rules based on his interpretation of extreme abstinence and celibacy[13]:

Gandhi used to sleep with Sushila Nayar, his personal physician and sister of his secretary. He describes how he maintained decency despite sleeping together: “While she is bathing I keep my eyes tightly shut…. I do not know … whether she bathes naked or with her underwear on. I can tell from the sound that she uses soap.” He also slept with one Vina and writes: “Vina’s sleeping with me might be called an accident. All that can be said is that she slept close to me.”

In 1946 he started sleeping with his 18-year-old grandniece Manu. In a letter to Manilal Desai in 1947 he says: “Manu sleeps with me. She is as a granddaughter to me, for her grandfather is the son of my father’s elder brother. She is, therefore, really a granddaughter to me. She came to stay with me at Sevagram when she was just a little girl.”[14]

He told her: “We both may be killed by the Muslims, and must put our purity to the ultimate test, so that we know that we are offering the purest of sacrifices, and we should now both start sleeping naked.”[15] This statement was made in the context of Noakhali genocide of Hindus in Chittagong (present day Bangladesh) where members of Muslim community orchestrated rapes, abductions and forced conversions of Hindus to Islam and looting and arson of Hindu properties[16]. For some strange egotistical reason Gandhi believed that the genocide of Hindus was somehow related to his failure to become a perfect celibate.[17]

However he continued with his experiments. He also slept with eighteen-year-old Abha, the wife of Gandhi’s grandnephew Kanu Gandhi, and at one point he was sleeping with both Manu and Abha at the same time[18].

Many people objected to Gandhi’s sexual experiments. One associate described them as “puzzling and indefensible”, while another person stopped working with Gandhi in protest[19]. Sardar Vallabhbhai Patel found these experiments reprehensible and wrote to Gandhi saying that what he was doing was adharmic[20]. Others also severed their ties with Gandhi stating that he was confusing adharma with dharma. But Gandhi was unperturbed and continued justifying his actions on spiritual grounds and equating them to a yajna.

“Probably you do not know that Manubehn (Jaisukhlal’s) sleeps with me. This has pained Bhai Kishorelal, Narahari, Swami and others and they have, therefore, stopped their connection with Harijan. Sardar also is very angry with me. For me Manu’s sleeping with me is a matter of dharma, and I am resolved to drive home the lesson that a person cannot give up what is a matter of dharma to him for the love of those who are dear to him or out of fear of anybody. If in a situation like this I give up what I believe to be my dharma through false regard for friends or fear or love, my yajna would remain incomplete and bear no fruit.”[21]

The collected works of Mahatma Gandhi have numerous references to Gandhi’s morbid obsession with sex, celibacy, abstinence and sleeping in the nude with females. This aspect of his character is hardly ever discussed in public domain in India where he is referred to as “Mahatma”. His celibacy experiments and social engineering models were bizarre to say the least and not justifiable under any circumstances. Yet he tried to hide his deviant adharmic behavior under a cloak of “Dharma” and morality and brushed aside any criticism.

Historian Kusoom Vadgama and self-confessed ex-“Gandhi worshipper” sums up the issue succinctly: “All his life Gandhi was obsessed with sex –while preaching celibacy to others. No one challenged him. He was the nation’s ‘untouchable’ hero, his iconic status eclipsed all his wrong doings.”[22]

Unfortunately, the entire history of Gandhi’s celibacy experiments have been white-washed out of existence by the powers that be, and people today find it hard to believe that a “Mahatma” would behave in such a manner.

French, P. (2013, January 31). The truth about Mahatma Gandhi: he was a wily operator, not India’s smiling saint. Retrieved from The Telegraph: https://www.telegraph.co.uk/news/worldnews/asia/india/9840076/The-truth-about-Mahatma-Gandhi-he-was-a-wily-operator-not-Indias-smiling-saint.html

Karkaria, B. (2014, August 16). Gandhi was obsessed with sex – while preaching celibacy to others: Kusoom Vadgama. Retrieved from Times of India: https://timesofindia.indiatimes.com/blogs/the-interviews-blog/gandhi-was-obsessed-with-sex-while-preaching-celibacy-to-others-kusoom-vadgama/