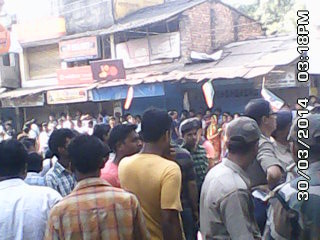 This is a report from the ground in South 24 Paraganas district, West Bengal. This report contains some graphic and disturbing pictures published. Readers’ discretion advised.

On 29 March 2014, six unidentified bike-borne miscreants from the nearby Muslim-dominated Sonakopa village entered his shop, shot the 42 year old Kartick Methia, with their pistols. After this, they chopped the victim with swords. Although it was late in the evening, there were some customers and workers in the shop. But they were unable to stop the miscreants in the face of crude bombs that were hurled.

Following his brutal murder, a massive crowd of locals blocked the Falta Road. They shouted slogans against the miscreants and against the police. The whole Sararhat market was closed in protest. A heavy police force arrived on the spot led by DSP Sakir Ali and OC Sudip Singh. They tried to defuse the tension and remove road block.

However, the local Hindu populace have very little faith in these two officers, and were in no mood to hear their plea. These two officers are allegedly hand in glove with local criminals and these criminals get political shelter because of their minority status.

Kartick Methia leaves behind three daughters who are now inconsolable. His eldest daughter Monalisa Ghosh was openly cursing the police. In a short while, Diamond Harbour SDO Smt. Moumita Saha arrived at the spot. Kartick Methia’s shop has a CCTV camera, which has captured the entire incident making it relatively easy to identify the culprits and solve the case.

However, local Hindus have very little faith in administration. Their experience of the Left-front protected notorious criminal Salim is still fresh; what’s more, his atrocities continue unabated under Mamta Banerjee’s tenure as well.

Kartick Methia was a courageous man who stood as a stonewall against Islamic expansionism in the area. In the nearby grounds of “Rash Math”, where many Hindu festivals and Islamic ‘Jalsa’ are held, local Muslims reportedly are trying to build a mosque. Their efforts failed due to Kartick Methia’s bold leadership of the local Hindus.

Now, after his brutal murder, local Hindus fear that just like the neighbouring Mograhat Block during the CPM rule, the Falta block too will witness large scale Hindu migration from the area.

Postscript: The body of Kartick Methia was kept for public viewing in his sweet shop. Only the face of the corpse was displayed while the rest of the body is fully covered. The marks of injury on the body are apparently too gruesome to be displayed to the public.

Wounds on the face of Kartick Chandra Mehtia

Wounds on the face of Kartick Chandra Mehtia–another view

The Great Calcutta Killings: How Calcutta Would Have Been Lost Forever