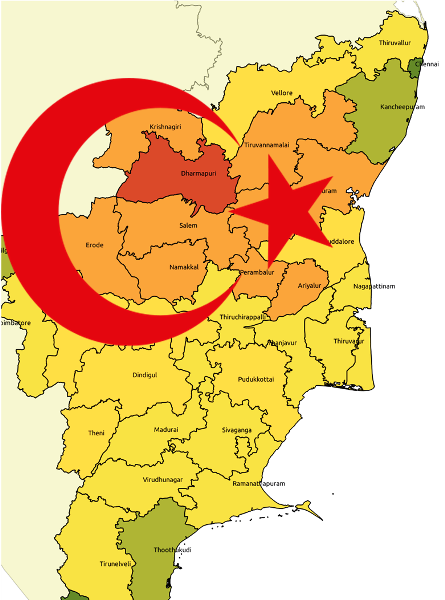 This is a ground report from IndiaFacts readers in Chennai about a shocking case of Muslim hooliganism in Chennai.

On 24 February, when a woman belonging to the Marwari community was returning home after work at around 3 pm in Muthialpet, Chennai, a few Muslim youth surrounded her and then molested her in public. The woman managed to escape from their clutches, reached home and informed her brother about the ghastly incident. When her brother went to the spot and questioned the youth, he was thrashed by about 30-40 Muslims. Seeing him bleed profusely from the head, they took him to a nearby hospital.

Following this, Thirunavukkarasu Elango, City General Secretary of Hindu Munnani went to the Police station for registering a complaint and seeking protection for the said woman. Even as he was in the station, a group of Muslims stormed the police station and then attacked Elango and his car.

Narrating the incident, Elango said that after the girl’s brother was admitted to the hospital, his

Relatives and the local Hindus rushed to the local police station and registered a complaint. The police arrested one person by name Shajahan. Immediately after coming to know of Shajahan’s arrest, persons belonging to TMMK (Tamil Nadu Muslim Munnetra Kazhagam), TNTJ (Tamil Nadu Tauheed Jamath) and a few other Islamic outfits stormed the police station with the intention of forcing the police not to take action against their men. I too proceeded to the police station. As I was alighting from my car, I was attacked from behind and my car was also not spared. The attackers said that they would burn me along with my car within two days and continued their attack on me. The police  standing around us stood as mere spectators. They stopped only after my driver took my car away.

Then the local Hindus started sloganeering demanding the arrest of the culprits. The Joint Commissioner of Police, assured us that strong action will be taken against the culprits and requested us to vacate the local people from the place. When we went near our people, Muslims were shouting “Allah Zindabad and “Pakistan Zindabad.” However, the police kept quiet and instead of taking action against them, they asked us to leave from the spot. In fact, the police were literally driving us away from the place.

The police came to us and asked us to leave the place. When we requested the local Hindus to go back to their respective places, they agreed, and, when they were about to take back their two wheelers, a group of about 40-50 Muslims started attacking them. The Hindus and their vehicles were attacked. When we spoke to the police about this incident, they tried to convince that they would give protection and asked us to go back.

Various Hindu Organisations have called for a bandh in the areas of Muthialpet, Sowcarpet, Broadway and surrounding areas condemning the attack on the Hindu woman and Elango.

No mainstream media house has reported this incident.

This incident is only the latest in an alarming spectre of Muslim hooliganism on the rise in Tamil Nadu over the last three or four years.