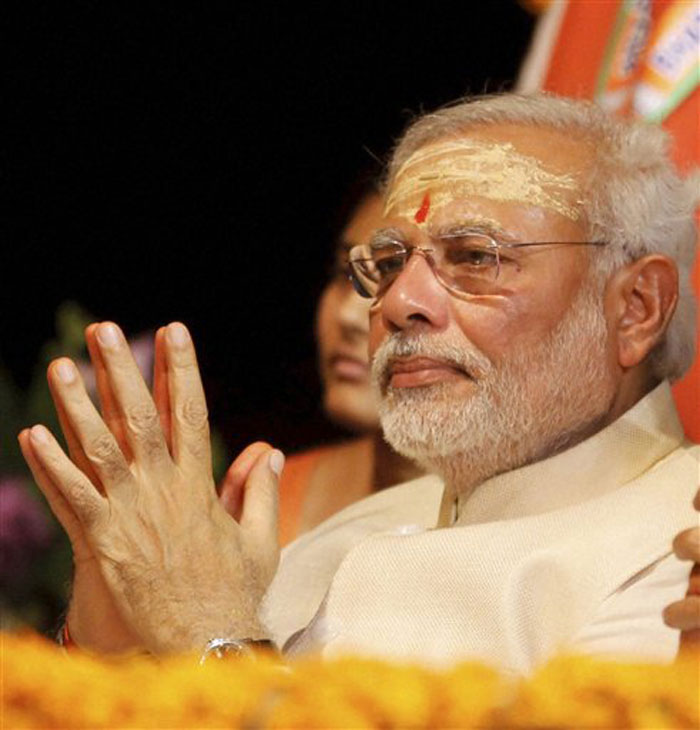 Narendra Modi poses the greatest challenge to Islam since modern Turkey’s Mustafa Kemal Ataturk, perhaps an even greater one. This has been understood perfectly by adherents to the marginal Wahhabi sect that has come to dominate Sunni Islam. These are the subversive purveyors of evil from the desert kingdom, symbols of arrogance and financial sponsors of global terror, put into power by the retreating British and sustained ever since by US imperial design. They and the worldwide clerical as well as secular retainers of their patronage and largesse are justly alarmed by the Modi phenomenon. Even a cursory look at contemporary Gujarat explains why Narendra Modi arouses such anxiety and wholehearted loathing.

After a dozen years as Gujarat’s chief minister, despite being maligned and libelled on an industrial scale, he has apparently struck a chord with its Muslims. All the perverse propaganda and incitement to terror against Narendra Modi personally, by his supposedly mainstream opponents, has not convinced all Gujarati Muslims that he is the devil incarnate. The have begun voting for him in growing numbers on the basis of the evidence before their very own eyes. They like good governance, development and an atmosphere of efficient purposefulness that is not scarred indelibly by widespread corruption. The absence of riots, which the poor Muslim most earnestly desires, is also a daily lived experience that all the malicious fabrications against Narendra Modi cannot dispel.

It is this phenomenon that has caused deep alarm among the conservative Muslim clergy. Muslims voting for good governance and economic development are an unprecedented challenge to their age-old, traditional authority, buttressed by the slogan ‘Islam in danger’. Their determined upholding of every vestige of India’s historical status quo, however irrational and indeed unjust is underpinned by cultivating fear and ignorance.

The dangerous chief minister of Gujarat, a man without elevated lineage or any recognisable signs of divinity, is poised put all this to the sword. He is offering the ordinary Muslim as well as countless others a peaceful life and a modicum of prosperity. And they are all showing more than passing interest in this seductive menu of choice offered.

India’s political class and its vast network of beneficiaries have also sensed the beginnings of a revolution that spells their own doom. Indian politics is essentially pure entrepreneurialism and the unashamed opportunism of the political class. Like used cars salesman and corrupt real estate dealers, there is nothing they are unprepared to do to sell themselves. The arousal of fear, mainly directed at Muslims and patent electoral bribery are their twin devices of befuddlement and deceit. Yet the sheer size of the growing electoral constituency needed to gain political power is too large to satisfy by robbing the public purse. Their vain attempt has brought the country to its knees, pretty much bankrupting the public exchequer. The outcome has been worsened because the massive buying-off provided too many opportunities for personal enrichment for politicians to ignore.

Narendra Modi is the oddball who is refusing to play their game and aspires to higher goals they find unfathomably indecent. Most frightening of all, after one successful term of good governance, Narendra Modi will split the minority vote bank permanently and commence their indefinite political oblivion.

The Indian media is unequivocally an appendage of its corrupt politics, lacking professionalism and honour. In recent days one television channel has taken to only showing films starring a particularly offensive ruling party candidate. The so-called Indian intelligentsia and its monstrous Anglicised incarnation is a standing reminder of John K. Galbraith’s pithy comment that whenever the intelligentsia is in unanimous agreement something is deeply amiss! The Indian intelligentsia is seeking to provide some form of moral and cognitive ballast for a rotten and corrupt politics by singing hymns on secularism and communal sins. But even mobilising their foreign supporters, waving personal banners of international status is failing to wash, when the standard bearers of such blessed principles are the likes of Laloo Prasad and the irrepressible Robert Vadra. In any case, these spin masters are in reality often unread and ignorant and forlornly hope that the masses they seek to brainwash will be none the wiser!

The threat to Islam posed by Modi’s modernising drive, turning India into a unified nation with a common purpose, is also deeply worrisome to its adversaries and even putative ‘friends’. Divide and rule, by tweaking every division and inserting nefarious purposes into every social fissure, has been the age-old imperial stratagem to keep India weak and achieve their goals. And Narendra Modi is threatening to challenge this blissful arrangement.

But worse, for the desert Arab kingdom and its profoundly destructive impact across the world, with the mass murder of Shia Muslims and mayhem from Nigeria and Mali to Thailand and China being their trademark, what does the modernity of Indian Sunnis mean to their exercise of unhindered control over the faithful? The loss of a significant segment of Indian Muslims to the hated allurements of modernity and women’s rights is the beginning of the end.

The slightly barmy obsessions of prominent sections of India’s Muslim clergy, entertained in few other Muslim countries, have been calculated to nurture division and fear to ensure the loyalty of a fearful minority population. The expansion of the Kolkata airport was held to ransom by a solitary mosque for decades, causing untold economic damage to the city. Mosques, it was argued cannot ever be touched although that is clearly not so in Muslim countries. Its move elsewhere has now been agreed, but only after vast compensation was extracted by a sullen local religious leadership. In the place of crass manipulation by religious leaders, the enticement of a peaceful life of freedom and personal attainment promises to create irresistible inducements for Muslims worldwide. This is the reason why Narendra Modi’s programme of change is feared. Mustafa Kemal Ataturk’s unsparing drive to modernise has stalled in contemporary Turkey, but dramatic change in an urbanised India, on the threshold of socio-economic modernity, is likely to be enduring.

And India will become a potent example to Muslims everywhere of freedom and prosperity.

(The author taught international political economy at the London School of Economics and Political Science for more than two decades.)