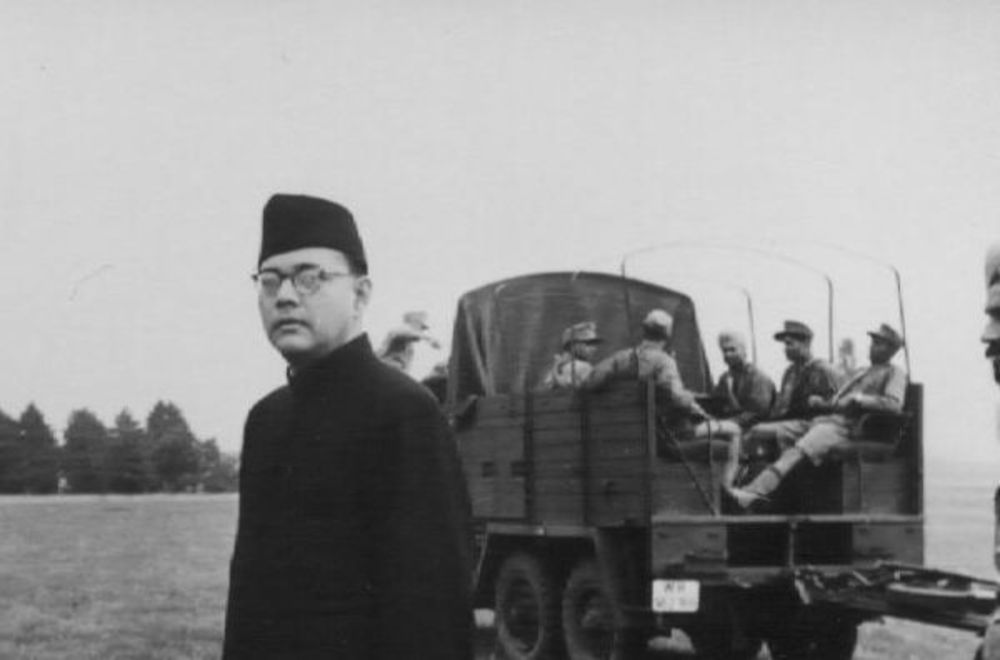 As records tumble out of the IB’s almairahs, there is a veritable helter-skelter in the house of the usual suspects. Those guilty have been duly exposed for the unpardonable crime they had committed against the most towering freedom fighter of India. This is a sacrilege that the nation must never forget and forgive.

However, before we proceed further on the reprehensible tactics of the Nehruvian statecraft, one must not forget for a moment, the starting point of the story: that Netaji Subhas Chandra Bose did not die in the air crash at Taipei on 18 Aug 1945 as the Anglo-American Bloc and their the then collaborators in India had tried to convince the world consistently but unsuccessfully.

In the latest issue of India Today (April 20, 2015) which incidentally broke the story on the I.B surveillance on the Bose family,  one “progressive” historian had once again repeated the lie, as did many other “eminent” historians before, including Prof. Gopal, whose father Sarvapalli Radhakrishnan, as the then Ambassador of India to USSR, was reported to have met Netaji in Russia.

If Netaji Subhas Bose had returned to India, he would have definitely swept away Jawaharlal Nehru. Bose was just 48 years old in 1945, and Nehru was 56. Moreover, Bose had defeated Gandhi’s nominee Pattabhi Sitaramayya in the election to the Presidentship of the Congress in 1939. For the British, Bose was  the real Enemy and not others in the 1930s and 1940s.

It’s revealing to take a look at the topmost leaders of the freedom movement. It was Bose—and not Gandhi or Nehru—alone was imprisoned in the infamous Mandalay jail (now Myanmar). Among other titans were Bal Gangadhar Tilak, Ajit Singh (uncle of Bhagat Singh), Lala Lajpat Rai and Trailokya Nath Chakrabarty or Mahraja as he was called (incidentally he served in the Andaman cellular jail as also in the Pakistani jail).

Therefore, the Editor of the India Today (p.3) was grossly mistaken  in saying that the British had imprisoned Bose in 1940, because of pro-Axis sentiment! The fact is Bose spent longer spells in the British gaol than Nehru ever did, and long before he developed any “pro-Axis sentiment,” he was banished to Burma when he was only in his 20s. Yes, Bose was certainly an admirer of De’Valera, the revolutionary leader of Ireland long before he had developed sympathy for the Axis Powers.

Bose’s entry was prohibited in Britain in the 1930s, not because he was supposed to meet Hitler, Mussolini, Hirohito or Tojo in London’s Hyde Park or 10 Downing Street, but because Bose was fearless and remained consistently an uncompromising nationalist (which can’t be said of some of his contemporaries), who had a phenomenal capacity to draw even the uninitiated to the fold, and moreover, Subhas Bose could not be manipulated. Editors of reputed magazines like India Today need to be more cautious in their choice of vocabulary and understanding of simple facts history.

Besides, having sympathies with the Axis Powers was no crime. Both the world wars were actually struggles for mastery in Europe and of domination of the world. After all, Churchill and Daladier were hobnobbing with Hilter in Munich (1938), and the USA did not join the war till December 1941. Stalin had an agreement with Hitler as late as 1939 which had lasted till 1941.

At home, Nehru had met Jinnah on (16 Aug 1946), the day Jinnah’s followers launched a merciless anti-Hindu pogrom – “Direct Action” in Calcutta,  while Gandhi kept addressing Jinnah as a Qaid-e-Azam. It has to be mentioned frankly that Jinnah was responsible for one of the biggest mass murders of all times. How did the Congress leaders look upon the Moplah-Muslims of Kerala even after they had subjected the Hindus of Kerala to an unprecedented and systematic genocide?

Tagore had publicly honoured Netaji at a public function in Calcutta after he was hounded out by the Gandhians and crowned him as a Deshanayak with a suitable quotation from Gita.  After all, Axis Powers were fighting the British and people of  India had no history of enmity with the Germans and the Japanese. Bose was not amenable to any pressure from the British as some of his contemporaries were. If drawing closer to the British was the only right path, why then did Gandhi give a  call for “Quit India” in August 1942, when the British were facing the greatest threat to their Empire since Napoleon’s time? Was it just a ploy to take the winds out of the sails of Netaji?

History-writing in post-independence India is indeed a joke and that’s why we don’t give any credence to an “eminent historian” of this genre who has offered a justification of Bose’s marginalisation in Nehruvian system. (India Today, 20 April 2015).

Now we take up another dimension. Gandhi, Nehru and their supporters by throwing out Bose from the Congress, just because he had won the Presidentship the second time by defying their sly machinations had only showed their true colours: personal ego and factional solidarity were more important than launching an immediate full-scale liberation struggle to secure India’s freedom at the earliest as Netaji rightly insisted. It was this chink in the armour that the cunning Jinnah promptly took advantage of, and immediately called for the break-up of India and the creation of Pakistan (Lahore Resolution 1940).

By then, the Congress had been exposed thoroughly as a house divided beyond repair, and its most dynamic and uncompromising leader of the freedom movement, humiliated and shunted out in the most ignominious manner. It strengthened both the hands of the British and the resolve of Jinnah in the most unexpected way. It is from this time that the British could manipulate the Congress brazenly and promote the Muslim League with all the guile and power they commanded.

And mind you, Churchill was the Prime Minister whose capacity for both long-term and short-term thinking was unmatched on both sides of the Atlantic. No wonder that Churchill had ordered the assassination of Bose at that time.  British records have not revealed as yet if any other leader of India’s freedom movement was singled out for assassination. Was not the greatest freedom fighter of Burma, Aung San, father of the Nobel laureate Aung San Suu Kyi, a friend of Netaji assassinated?

It is in this background that we must examine why the Bose family was being kept under surveillance when Nehru was the Prime Minister. The stance taken by some Congress  politicians that the reputation of some highly respected Home Ministers being involved, this probe need not be pursed further does not make sense. Even in tradition-loving Britain, Oliver Cromwell’s corpse was dug up, put up in chains and then beheaded when the Royalists were restored in 1660.

For seekers of truth and historians worth their salt,  facts alone are important, irrespective of the stature of the persons involved.  Similarly, one should not fight shy of disclosing if Bose also had shortcomings as Surya Bose, Netaji’s grandnephew had said candidly in Berlin on 14 April after he had a  meeting with Prime Minister Narendra Modi demanding declassification of Bose papers. That’s the way one should look at the past.

The fact remains that the I.B. certainly could not have continued this operation without the approval of the highest in the hierarchy because and that is how the system works. The authorities feared Bose—dead or alive. If alive, he on his own would have rallied the people around his persona as no one had done in India’s recent past. That would have put paid to the success of the political dynasty foisted by Nehru on the people of India with all its ruinous consequences. We can also assert that Netaji  might have prevented the Muslim separatists from partitioning India and even if it was done so, might have minimised the cruel fate which suddenly befell the hapless Hindus, Sikhs, Buddhists and Christians in the two wings of Pakistan.

As specialists on Subhas Bose know that he  always used to have a Plan B ready if the first plan failed. Moreover, Bose had a known track-record of anticipating events, and then working out every possible detail to meet every eventuality. Moreover, any authentic information on the whereabouts of Bose and his “plans”, if any, would be best known to his  family first, and perhaps no one else. This is why Nehru’s government apprehended that the Bose family might turn into the nucleus of an impending mass upsurge.

If Bose was dead, then, any information regarding the circumstances surrounding his well-planned “disappearance” by the Big and the Mighty in India and abroad, could have perhaps dealt a severe blow to the carefully nurtured aura around Nehru, and exposed him as a collaborator of the Colonial Powers.  After all, Mountbatten, appointed as the Supreme Command of Allied Forces(SEAC) in Singapore, after Japanese surrender, had ordered immediate demolition of Bose’s INA memorial, whose foundation had been laid by Netaji “to commemorate the unknown warriors of the INA.”

Soon after Nehru, the “liberal” while visiting Singapore went around the city in an open car with Mountbatten. Certainly Nehru had been appreciative of the sacrilege on Mountbatten’s part. Is it then a surprise that Nehru’s IB and MI5 were working together? So much of national honour.

If the IB had carried out this surveillance why deny it? It had every jurisdiction, but it is unpardonable since it was done against a leader, freedom fighter and patriot as great as Netaji Subhas Chandra Bose and his family members. And all  these were being done when Lord Mountbatten was made the Governor-General,  who along with the top “national leaders” ensured an unjust mass migration pattern (West Pakistan threw out its entire Hindu and Sikh population while its Eastern wing began it slowly, but with no less brutality while India’s Muslim population did not migrate on that scale).

Of course, then there’s the well-known matter of how Lady Mountbatten became extra-friendly to Nehru. Both the Mountbatten- Nehru duo complicated a simple Kashmir issue into a festering sore. This was the time when Nehru was bent on “secularising” Indian polity further by “white-capping” the Muslim League leaders in India (by inducting them in Congress) as Shyama Prasad Mookerjee had put it so evocatively, and castigating genuine Hindu grievances as communal. No wonder that Nehru went on blundering from disaster to disaster.  Mookerjee’s “mysterious death” in Sheikh Abdullah’s jail, a close friend of Nehru, the “democrat” happened soon thereafter.

Naturally, the IB could not focus elsewhere—for example, on the Pakistani marauders in Kashmir valley in 1947, and the more formidable  “revolutionary” army of Mao in 1962, who could have been thwarted. In both cases, Pandit Nehru, the “visionary”  had no clue of the impending disaster. The IB was unfortunately misused for serving his personal interest  and not in the larger national interest as it ought to have been.

Our infant Republic, after centuries of slavery was thus, unfortunately being built on faulty foundations. Let us all ask ourselves this honest question—does these actions of Nehru even faintly echo the timeless Call of Bharata, “Satyameva Jayate?”