Nothing to celebrate about Periyar 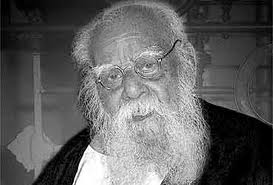 Today is the 135th birth anniversary of Erode Venkata Ramaswamy Naicker, or as he is affectionately called Periyar (the Great Man).  In the birth anniversaries of great men who are no longer with us, it is the usual practice to highlight their greatness. According to the followers of Periyar, his greatness comes from the following:

Even today, intellectuals who write about Tamil society and polity continue to put forward Periyar as an important figure of social progress based mainly on the aforementioned points. They go ahead and equate Periyar with the likes of Babasaheb Ambedkar, Sree Narayana Guru and Mahatma Ayyankali.

However, these comparisons do not stand the test of accuracy. The intent of this piece is not to sketch a biography of Periyar but an attempt to re-examine the ideas and causes he espoused. That Periyar was the pioneering leader of the so-called “Dravidian” movement is beyond doubt, and it is where we need to begin. And so, the first thing that we need to examine is Periyar’s chief motivation and the wellspring from whence he derived this motivation. That wellspring was his unshakable belief in the now debunked Aryan Invasion Theory. (AIT)

It has been pointed out in an earlier piece  that the ideology of the Dravidian movement can be traced back to the works of Bishop Robert Caldwell, an evangelist and a linguist who aggressively popularized the idea of an Aryan invasion of India. In Caldwell’s analysis, the Aryans sent their agents, the sly Brahmins who through their faith now known as Hinduism enslaved the Dravidian people who were given the title of ‘Shudra.’ The main aim of Caldwell in projecting the Aryan-Dravidian divide was to make way for mass conversions because many in South India were led to believe that Hinduism is a racist cult dominated by the Aryan Brahmins.

This belief was turned into a combative political ideology by Periyar. He saw all of South India as a separate nation from rest of what he called the ‘Aryanstan.’  To the bulk of his Tamil and other South Indian admirers, he presented Hinduism as a racist, Aryan-Brahminical cult as per Caldwell’s diktat. So obsessed was Periyar with the AIT that by the 1940s, as India approached independence from Britain, he feared that North India would take the place of Britain to dominate South India.

Periyar responded by calling for a separate nation, comprising Tamil, Telugu, Malayalam and Kannada-speaking regions—roughly corresponding to the then  Madras Presidency but failed to get British approval.Fortunately, his mangled views were only accepted in present-day Tamil Nadu, while other South Indian regions—Telangana, Andhra Pradesh, Kerala, and Karnataka rejected them without batting an eyelid.

Periyar bemoaned the independence of India from British rule as he believed that the South would now become “Sanskritised” leading to a subjugation of the Tamils by the Aryans. And so the concept of Dravida Nadu was modified down, and restricted to Tamil Nadu. This then led to a proposal for a union of the Tamil people of not only South India but including those of Sri Lanka as well.

This proposal for a “sovereign Tamil” raised concerns among the Sinhalese politicians in Sri Lanka. In 1962, a Sinhalese M.P. stated in the Parliament:

The Sinhalese are the minority in Dravidistan. We are carrying on a struggle for our national existence against the Dravidistan majority.

The island nation which was already simmering with tensions between the Sinhalese majority  and Tamil minority can obliquely thank Periyar for his contribution to this sensitive issue. As for India, even today, many Tamils view themselves as a separate nationality from the rest of India, and at times, they even refuse to celebrate India’s cultural and civilizational heritage.

And so the whole claim of Periyar being a rationalist boils down to his unexamined faith in a spurious racial theory.Now, to examine the next claim that Periyar was a champion of progressive Tamil identity, a sample from his 1954 speech would be a good place to begin:

Without mincing any words, Periyar called for an exclusive Tamil identity. Periyar’s “Dravidian” movement also contained in it a disdain for Dalits which often manifested itself in offensive forms as can be deduced from one of Periyar’s own statements on Dalit leaders of the then Madras Presidency who were asking for social equality:

Whoever your leaders be, they parade you – as lame, diseased, blind, leprous – for money; and even without buying milk to feed you, nor applying any balm on your wounds, they further emaciate you, and display your condition to others to earn more money.

In another instance, he asked:

If Sahibs [Muslims] get proportionate representation and the Scheduled Castes get representation in jobs and education, and if the rest of the slots are monopolized by Brahmins, O Shudra, what will be your fate and future?

As for Periyar being on the same pedestal as Babasaheb Ambedkar, Sree Narayana Guru and Mahatma Ayyankali, nothing could be farther from the truth.

It is true that Periyar praised Ambedkar. However, his praises were motivated by his keenness to belittle Tamil Nadu’s Dalit leaders as cited above. Post-1947, he attacked Ambedkar for supporting a “United India.” It is correct to say that Babasaheb Ambedkar was harsh on Hindu society particularly on the question of varna. Yet, he did not fall for false propaganda. This is what Ambedkar said about the Aryan Invasion Theory:

Enough has been said to show how leaky is the Aryan theory expounded by western scholars….. Yet, the theory has such a hold on the people that what has been said against it may mean no more than scotching it. Like the snake, it must be killed…..In the face of the discovery of new facts, the theory can no longer stand and must be thrown on the scrap heap.

Mahatma Ayyankali who after numerous struggles was successful in winning educational rights for Dalits in Kerala also rejected the false Aryan-Dravidian racial constructs and steadfastly supported the efforts taken by the Arya Samaj and the Hindu Mahasabha to eradicate caste prejudices.

Even Sree Narayana Guru, the great apostle of social advancement in Kerala never used the racial framework to reverse the foundations of Hindu society. The Guru was able to change the Keralite society by drawing from and with the support of Hinduism without causing any social discontent.

On the other hand, Periyar was so deeply faithful to Caldwell’s Aryan Invasion fantasy that he actively promoted hostility towards the Brahmin community. Here is another Periyarite gem:

The Brahmin is a snake entangled in our feet. He will bite. If you take off your leg, that’s all. Don’t leave. Brahmin is not able to dominate because power is in the hands of the Tamils.

Even the great nationalist poet Subramanya Bharathi was not spared because of his caste:

They say Bharati is an immortal poet…All of Tamil Nadu praises him. Why should this be so? Supposedly because he sang fulsome praises of Tamil and Tamil Nadu. What else could he sing? His own mother tongue, Sanskrit, has been dead for years. What other language did he know? He cannot sing in Sanskrit….

Periyar’s Brahmin-hatred was unparalleled and with time and rabble rousing on a massive scale, it wasn’t long before violence followed words. The Brahmin exodus from Tamil Nadu was one of the greatest “gifts” that Periyar gave in his ascent to carving out a rational and progressive Tamil identity.  Even the modern manifestation of this anti-Brahmin stand has been detrimental and fatal as can be seen by these two incidents:

1. Recently numerous Dravidian organizations staged irate demonstrations against the central government’s decision to celebrate ‘Sanskrit Week,’ with some even threatening to attack schools if they go ahead with the celebrations.

2. In an interview given  by Kumaran Pathmanathan a former leader of the dreaded terrorist group LTTE, he claimed:

Even after Periyar is gone, his ideas have been passed to people like Prabhakaran, especially anti-Brahminism. Prabhakaran’s idea was to struggle against the Brahmins. Because of this Tamil Nadu politicians made a marvelous hero out of Prabhakaran….That’s why he made this blunder against Rajiv Gandhi.

This I cannot say yes, but you know that influence…they fed him against the Brahmins. That’s why he hated the Prime Minister of India.

The inescapable conclusion is this: Periyar gave birth to a movement which rests on an edifice of hatred to justify its existence. The Dravidian movement still practices racial hatred for Brahmins although to a lesser degree.

I think Periyar’s speeches and writings were passionate enough to inspire a whole generation of Tamils to believe in his cause. In modern day Tamil Nadu, politics is dominated by parties which subscribe to the “Dravidian” ideology crafted by Periyar—the ideology is paid lip service today, but none in that state can dare criticize it without incurring significant costs.