Notre Dame: Christianity and the Genocide of Gods in France 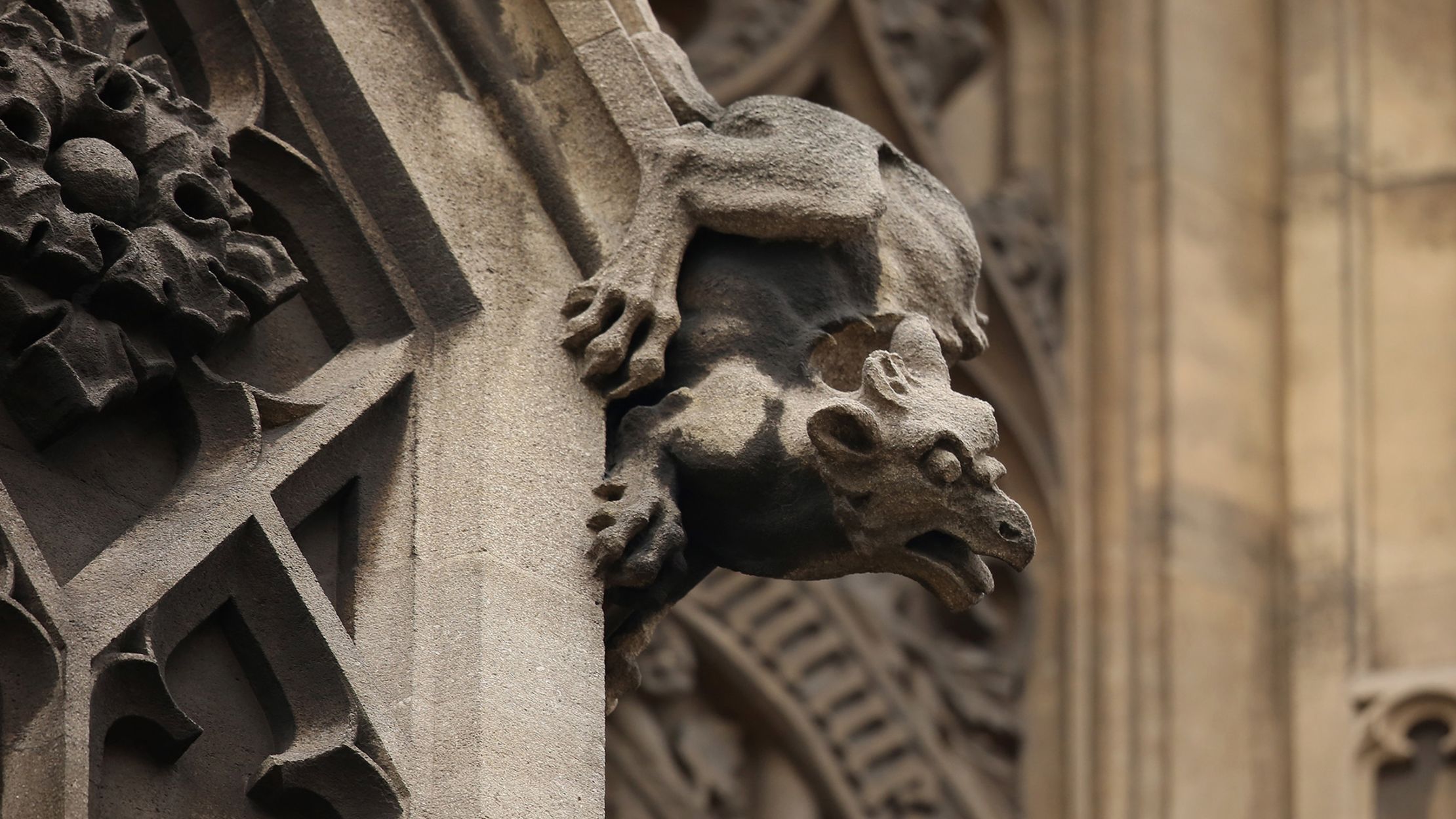 The fiery devastation of the Notre Dame cathedral of Paris evoked strange reactions among Indians. Firstly, you had hysterical anchors in the English language media providing live coverage 24/7. After all, if you are a Lutyens journalist you must not lose the opportunity to say the words “Notre Dame” as if French is your second mother tongue. The same anchors were blissfully unaware of the massive fire in 2018 that destroyed irreplaceable treasures at the 2,600 year old Madurai Meenakshi Temple. Secondly, the Macaulayite classes went into a collective swoon as if it was their ancestral home that had burned down. Such behaviour can only be compared to (as the saying goes) Abdullah dancing at the stranger’s wedding – there’s no point, nobody cares, and you look like a fool.

Make no mistake, it is painful to see an architectural masterpiece go up in flames. The Notre Dame – or at least what’s left of it – is indeed an awe inspiring building. But the people who find it fashionable to shed tears over its destruction don’t realise they are shedding tears over a Catholic Christian cathedral that was built after the destruction of a majestic temple built in honour of Roman and Gallic (ancient French) Gods. At the very least, Indians should be saddened at the razing of a shrine that existed there more than two millennia ago until the Christians destroyed it a thousand years later. After all, India has lost more temples (Hindu, Buddhist, Jain and Sikh) to Christianity – and its twin sister Islam – than any other country.

In 1711, workmen digging beneath the choir of the Notre Dame unearthed four sculpted altars which were recognised as belonging to a vanished temple built by the Nautae – the sailors and shipping capitalists of ancient Gaul. One stone bears an inscription in Latin to that effect: Nautae Parisiaci publice posierunt or “officially appointed sailors of the Parisii tribe”. (1) It also carries the name of the Roman Emperor Tiberius, thereby placing the construction of the stone temple to the period 14 to 37 CE – around the same time that Jesus reportedly lived.

The Roman Gods, who became the official Gods of Gaul, occupy more than half the faces of these French altars. These include Jupiter (the chief Roman deity), Mercury (the God of merchants and travellers), Vulcan (the God of fire and metal working) with his mallet, and Castor and Pollus (the twin Gods of sailors) leading their horses.

The largest altar, which stands about four feet high, belongs to four Gods. On one side of it are Jupiter and Vulcan. On the breathtaking third face of the altar is another world – the green living world of the Gallic Druids – where you discover a brawny woodsman, naked to the waist, and standing in the midst of foliage with a small hatchet in his hand. He is Esus, a divinity for workers or sailors who required muscles for their toil, an ancient relative of Hercules.

On the fourth face is a bull and three cranes – birds of wisdom and guides of travellers as per Roman religion.

San Francisco-based architectural critic and writer Allan Temko, wrote about the Gallic Immortals, the vibrant pantheon of beautiful Gods and divinities that existed in France before the death cult of Christians uprooted and destroyed them. “Men adored a stone, a spring, a green tree. They sacrificed to the sun and the moon, the brighter stars. They dedicated altars to beasts and reptiles and various birds: to the hawk, the serpent, the hound the bear. They worshiped a powerful wind which sometimes swept over the uncultivated fields. There was a God in the white waterfall, in every well, in caverns, or where paths met, and on hilltops. The Gods were numerous, fierce, jealous, and as complicated of uncomplicated as the humans who enshrined them; but among these Gods was a Mother Deity, an austere Celtic Madonna who frequently held a child in her arms, and both mother and son have a certain following in France to this day.” (2)

The last sentence is a clear pointer to the theft of civilisation by Christians who not only appropriated the mother and child legend but also negated and destroyed the sources of that legend. Till today, Christianity refuses to acknowledge that the Madonna and child icon is stolen from the histories of more ancient Gods – including Isis, Mithra and Krishna.

When the first pagan Parisians settled in Ile De France on the banks of the Seine river, much as the ancient Vedic Indians settled the Saraswati valley, they brought with them their Gods and the arts. On a bend on the Seine, they found an island with a low hill and on top of that they built a temple of branches and leaves and installed their Gods “more centuries before Adam and Eve than we can remember”. (2)

These Gods were waiting when the Romans under Julius Caesar conquered Gaul in 52 BCE. And here’s the difference in the treatment of conquered civilisations. While Christianity – and Islam –destroyed every facet of the country’s past, the Romans (like the Greeks, Hindus, Chinese or Japanese) accepted the Gods of the conquered territories and worshipped them as their own. It wasn’t mere tolerance, but acceptance. As Temko noted, the Nautae built a grand stone temple dedicated to both Gallic and Roman Gods, but “the native Gods outlasted the Romans”. (3)

Christianity was never the “Religion of Love” as the church so shamelessly claims, but in fact it almost always spread through genocide and horrendous torture of those conquered. For, no European – or for that matter any rational human – would trade his peacefully co-existing Gods with the Yahweh of the Bible who is “now and then, greedy, irascible, bloodthirsty, capricious, petulant” and whose “conscience is as flexible as that of a bishop in politics”. (4)

In the constitution of any modern democracy that would be considered hate speech, not the words of a divine being. But that’s not all. In one instance, he commands Joshua, a central figure in the Bible, to “utterly destroy” the Canaanites and “leave alive nothing that breathes”.

With their God providing such incendiary words, the early French converts would no doubt have been possessed with the zeal to destroy the beloved temples of their fathers. And so the French replaced the diverse Gallic divinities with a genocidal tyrant.

No doubt the native European Gods had their weaknesses – they played naughty tricks on their subjects; were sometimes angry if people forgot to offer sacrifices in their honour; and were on some occasions sexually amoral. But on the whole they were benevolent and fun-loving Gods who reflected the nature of humans. They were noble and loving compared with the angry Yahweh and his son Jesus who once burnt a fig tree because it was not bearing fruit. Incredibly, it was not the season for figs.

The fig-tree burning episode offers a peek into Jesus’ psyche – he’s a Yahweh in the making; like father, like son. As the current reigning divinity at the Notre Dame, he is far removed from the down-to-earth Esus who protected the trees, but is now confined to a museum. Why can’t France reinstate these illegally ousted Gods and offer them worship as their forefathers proudly did a thousand years ago?

Reacting to the fire, some of the posts by neo-Pagans and polytheists reflected the complexity of conflicted thoughts and emotions among Europeans. Said one, John Beckett: “I’ve never been to the Notre Dame, but I’ve visited other cathedrals in Europe. Immediately upon walking in I know I’m in a sacred place. They are temples to another God and another religion, but they give me some idea of what it must have been like to walk into the ancient temples of the Gods I worship. My feelings about the way Christianity conquered Europe and about the politics of the current Catholic Church do not diminish my feelings of sorrow at the damage to this sacred place.” (7)

France has come a long way since the destruction of the temple of Jupiter. Less than 6 per cent of French Catholics attend church. Christianity as a morality code was so repugnant to the liberal ethos of the French that during the French Revolution of 1789, a mob nearly destroyed the cathedral and what it represented. Clearly, the French national motto of “Liberte, Egalite, Fraternite” (liberty, equality, fraternity) is as removed from Christianity as day is from night.

The Notre Dame as fig leaf

The theft of civilisation that the Notre Dame represents must not be forgotten. Nearly all of the ancient religions of Europe (and in other parts of the world including North and South America, Australia, and Africa) have been irretrievably destroyed. Only a handful of countries such as India and Japan survived the onslaught of Christianity – and its offshoots Islam and Communism. And this trinity is not done with polytheists yet – as Pope John Paul II declared in the year 2000, a “bountiful harvest” awaits the church in Asia in the new millennium. This is no less than a call for the genocide of the remaining Hindus, Japanese, Chinese, Vietnamese, Myanmarese, Thais and Cambodians among others.

The Notre Dame is no more than a tourist trap, but its coolness masks Christianity’s hidden hand. Just like walking into a swinging nightclub could turn out to be the journey to cocaine addiction, benign structures like this cathedral hide the horrors that come with conversion.