Officer of Army Chief’s regiment let off in misappropriation case 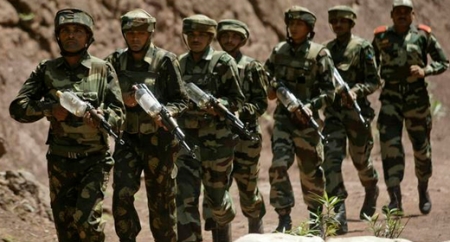 A Sikh Light Infantry Colonel posted in RR faced a Court of Inquiry and was found guilty of misappropriation of regimental funds. But the Inquiry Board gets a call allegedly, asking them to acquit the officer with just soft administrative action instead of disciplinary or even tough administrative (like court martial). The officer is let off. It may be noted that Army Chief General Bikram Singh is also from Sikh Light Infantry.

This is about the regimental fund allocation to units for their day-to-day necessary expenditure. The officer in question is  Col A.L Maini, earlier posted in 19 RR and now in IMA, Dehradun as battalion Commander.

In 19 RR, under Victor Force, Maini underwent a court of inquiry (CoI) for alleged bungling/mishandling/misappropriation of funds amounting to approximately one crore Rupees. This is the annual regimental fund allotted for day to day administration.

The officer was in 19 RR from September 18, 2010 till August 2013. The CoI comprised three officers and was in progress in November 2013, as the officer was about to leave for his next place of posting, IMA Dehradun.

Col L. Singh has taken over from him., and has to somehow now compensate the loss. In other words, taxpayers will now pay for this loss. Allegedly, no briefing was given to the new Commanding Officer, who took over.

Findings of the CoI

1. Expended money beyond his powers without sanction.

2. Timelines not adhered to.

5. Handled finances all by himself, accounts officer not in picture.

6. Unauthorised cash collected as loan and given to Maini from civil contractors.

1. Non adherence to laid down procedures.

2. Accepting cash from civilian contractors in contravention to orders and procedures on the management of public funds and not clearing it before relinquishing Command.

4. Wrongfully instructing the Subedar Major to destroy a record of financial transactions by burning.

Just when the CoI was about to rule court martial and imprisonment, a phone call stopped everything mid-way.

2. Clear pending payments. However, the money is gone and will not be recovered.

3. Additional funds to be made available to meet the remainder of the year’s requirements which means extra load on the exchequer.

According to sources, “It is common practice every year that each unit gets allotted funds, all of which may not be used–for example, transportation funds (to the tune of 30-40 lakh). Bungling takes place at every level”

This report was first published at the Chindits blog.

(The author is a defence journalist)