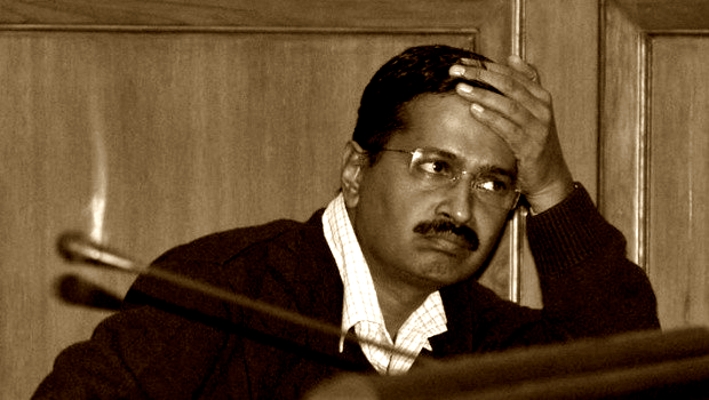 The Pakistan-supported political gorilla Arvind Kejriwal and his communalist outfit Aam Aadmi Party are back in the news once again.

The time has come to inform the Indian masses, especially the somnolent Hindus that  the notorious motormouth Kejriwal is a foreign-funded strategist who has been a favourite of Pakistanis and anti-India activists safely ensconced in the POK (Pakistan-Occupied Kashmir).

After the successful debut of his politico-communal outfit AAP  during  the Delhi Assembly elections of 2013, an expose of his Pakistani connections had appeared in The Afghanistan Times, Kabul.  In a seminally researched article posted by a Baloch journalist, Aamna Shahwani  on 4 March 2014,  the following important questions were raised in The Afghanistan Times. Briefly, Aamna Shahwani’s article highlighted the following important  facts  showing Kejriwal’s Pakistani connection :

It is quite amazing that  the  voluble Indian media–neither  the “unpaid media” nor the “paid media”–are aware of the fact that the AAP has enlisted powerful support of several anti-Indian groups operating in Pakistan and POK.

In a scintillating article posted on the website of ‘Covert Wires’  on 17 November 2013, two braveheart researchers, Somiksha C Mohanta  and Nazia Murad, had drawn pointed attention to  the fact that the Kashmiri separatists have been running online donation campaigns for the AAP.

The two journalists wrote that Kejriwal was not a visionless man. He has a farsighted vision which enables him get the the proper sense of what and when and how he can earn foreign funding. A man like Kejriwal who had allegations on him of getting funds from foreign agencies had found the other way to get the dirty money in a clean fashion.

AAP constantly boasts  of getting funds from NRIs’ clean money through its website’s donation section. Once AAP boasted that it has received a huge sum of INR 5 Million from an NRI based in East Asia.  No one can ever prove whether the foreign agencies are channelizing the funds through anti-national Non Resident Indians embedded in shadowy agencies,  are funding hypocrites like Kejriwal running a political organization in India.

The article also highlighted that many Pakistani online forums were campaigning for donations for AAP. The posts on the Internet show a screenshot of the donation process by a man who works for Gulf Pakistan but claimed to be a resident of India, and has donated his two months’ salary for AAP.  Claiming to be Qayyum, a 47 years old Indian, who loves to call himself Endian has donated INR 45,000 to AAP. He has taken the screenshots of the form filling and the payment process and then receiving the Transaction ID. He was  inspiring  all  Pakistanis to donate at least INR 100 to AAP.

So why does he sacrifice his two months’ salary to AAP?

His message  to the Muslims can be seen in the remarks box, مجھے یکین ہے کی آپ لوگ ہندوستان مے اسلامی ھقمت قیام کروگے   It means, “Mujhe Yakeen Hai Aaplog India Me Islami Huqumat Qayam Karogey”  (I am sure you guys will establish Islamic rule in India).

The pro-Kejriwal Qayum had described the situation created by AAP as a historical turning point and Kejriwal as the Neo-Jaychand who will initiate the second phase of Islamization of India. His message posted  in the online campaigns says that the citizenship filter is a deliberate security breach and even as you have to sign that you are an Indian citizen in the form, it lets you bypass the phase. This is a nice way to shoot two targets with a single arrow, managing public perception that they are receiving no foreign funding but only NRI money. Thus one can still  make a donation to  them. Then as you successfully make the payment through a credit/debit card, you will receive a Transaction ID.

After this, Qayum, the Kejriwal admirer urged the public to assist AAP according to his/her capability because, “Allah said that the dust you face in the battle, will return as fragrance and then help you invest in the cause of Allah, will be returned to you 700 times more.”

Now we can turn to a post supporting the Aam Aadmi Party, first found in a Facebook page named “Our Kashmir Our Concern” running from Muzaffarabad in Pakistan-Occupied-Kashmir, promoting separatist causes: https://www.facebook.com/photo.php?fbid=232217923619106.

The same post was eventually found in other separatist and Pakistani pages.  Which means that AAP is probably getting generous funding from anti-Indians in Pakistan and POK.  It is time that Arvind Kejriwal explains why the title of Jaychand has been bestowed on him by Mr. Qayyum “Endian” in his message (see Appendix)? Does AAP promote the cause of the “Indian Muslim” defined in the message of Qayyum “Endian”?

As highlighted by the two researchers, Somikasha Mohanta and Nazia Murad, given below is the  original photo posted by Qayyum showing him donating 45000 INR to AAP and instigating other like-minded Muslims to donate. This image can also be accessed on the website of Covert Wires.

Qayyum cites several reasons why AAP must be supported by Pakistani and Indian Muslims and “Good Hindus”. One of the reasons is revealing: AAP is boldest critic of the BJP which is the most nationalist Indian party and the most anti-Pakistan. Since AAP has excellently fooled the Indian masses to believe every rubbish it spits out, it quickly blamed Narendra Modi and Amit Shah for provoking communal riots in Muzaffarnagar in UP without any proof. However, when this allegation from AAP  invited widespread criticism, it pulled down the post from its official website. However when the nefarious role of Azam Khan of Samajwadi Party was exposed by media, AAP, the self-acclaimed honesty-certifying-authority had no words to condemn him. This incident exposed how blindly the AAP is venomous against the BJP and how it is intrinsically dangerous to Indian democracy. But then, this precise quality qualifies AAP to gain funding from Pakistanis and “Endians” like Qayyum.

Here’s another screenshot from the same article posted on the Covert Wires website:

How AAP dares to collect online funding from Pakistanis and radical Muslims to  Islamize entire India can be explained rather easily.

Arvind Kejriwal has always turned a blind eye to Imam Bukhari, the notorious rabble-rousing dreamer of an Islamic Republic of India. Imam Bukhari, the Shahi Imam of Jama Masjid, Delhi has innumerable charges of communalism and inciting violence, including corruption apart from not paying taxes and electricity bills.  Kejriwal had also also met the hardcore communal anti-Hindu Mullah Taukeer of Bareilly to draw Muslim votes for AAP. When asked what was he doing with this communalist, Kejriwal lied that said he didn’t know about his communal background!

When we also recall that Kejriwal was the key man who had removed the photo of Bharat Mata from the IAC dais on the plea it was hurting the sentiments of Indian Muslims, a clear picture emerges.

Indeed, why does AAP require the avalanche of Kashmiri separatists’ funding? Is there a secret deal of the outfit with militant separatists?  The AAP Core Committee member and the well known lawyer Prashant Bhushan had publicly pronounced that he favours the  separatists demand for  referendum separatism of Kashmir.  He backtracked later to save  Kejriwal from public criticism by adding that it was his personal opinion. Small wonder that AAP is viewed  by Pakistan and POK militants as a useful instrument to back-stab India on the Kashmir issue.

Keeping in mind the startling facts revealed by Covert Wires, Kejriwal must now be called upon to explain how much funding his ragtag outfit has received from anti-India Pakistanis and Indian traitors like “Qayyum Endian” working overtime for the destruction of the Hindu identity of India. Prime facie the word  “Endian”  cleverly coined by Qayum emphasises his goal of ending India by supporting Kejriwal and others of his ilk.

Apparently the mouthing of  the vote-catching slogan, ‘Bharat Mata ki Jai’, shouted by Kejri and his supporters is nothing but ‘Taqiyah’ duly sanctified in Islamic scriptures. After all, it was Kejriwal who had removed the painting of Bharat Mata from the backdrop of Anna Hazare’s platform in the Ramlila ground in order to garner the support of Imam Bukhari.