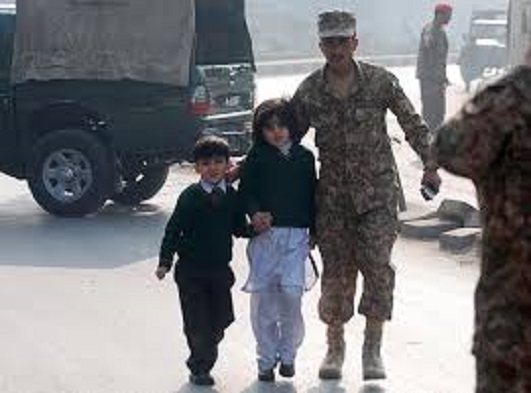 With every passing day, my disdain for liberals grows. Earlier, it was primarily because of their proclivity to slavishly follow the Left, because of their moral bankruptcy; now, I am getting convinced that our public intellectuals are also inadequately educated. Or perhaps their learning and perception have been hopelessly vitiated by the baneful influences of Marxian theories and postmodern idiocies. Hence their incomprehension regarding the Peshawar massacre that claimed the 145 lives, 132 of them children.

Shobhaa De is perplexed. In an articles in The Times Of India (December 21), she wrote: “Can anybody answer that perplexing question—why children?” Well, I can answer the question, Ma’am, and so could you—had you bothered to know a little bit about the history of modern world. When a group of people are indoctrinated, or rather intoxicated, by a supremacist ideology, they are capable of perpetrating any atrocity; they become more dangerous than the most violent conquerors and tyrants of ancient and medieval times. Nazism is one example: apart from triggering the Second World War, the most devastating in the history of mankind, it was responsible for the slaughter of, among others, six million Jews. Another, and bigger, instance is communism: the number of victims exceeded 100 million. And now it is jihad.

“Perhaps there is some twisted logic that will become apparent as a stupefied world comes to terms with a tragedy that defies categorization,” wrote De. The “twisted logic” of Islamism is already apparent, but for those who want to view appearances as they are, not for those who see the empirical evidence from the prism of political correctness; in fact, it is self-evident.

But De is busy with drivel: “At the moment, there is just an eerie numbness. Maybe, that was the whole point of the attack. Numbness slows down thought, action, reaction. Ruthless attackers of the innocent count on collective numbness. They seek to stun. To shock. What appears irrational, insane and unspeakably brutal to others has a purpose after all. Or else—why children?”

The numbness De bemoans is not the consequence of jihadist brutality but of the myths and shibboleths she and her ilk have blindly accepted and internalized. The most dangerous myth is that jihad is a perversion of Islam, that it has little, if anything, to do with the ‘religion of peace.’ The reductio ad absurdum argument shows that this assertion is wrong. For if jihad has nothing to do with Islam, then jihadists also are not Muslims, Osama bin Laden was not Islamic. But this is like saying that the Pope is not Christian, Stalin was not a communist, and Nathuram Godse was not a Hindu.

All religions had features which militate against the spirit of modernity; but while other faiths have evolved over the centuries, there are very powerful sections among the Muslim community, many of them violent, who want to keep their religion in its pristine form, the form that existed during the lifetime of Prophet Mohammad. The Wahabis, Salafists, Taliba, Al Qaeda, and other puritans want to keep the faithful imprisoned in the seventh century.

Liberals like De fail to appreciate this fact and keep indulging in sentimentalism and politically correct claptrap. So, Tavleen Singh wrote in The Indian Express (December 21): “As details of this latest jihadi horror have unfolded, I have found myself thinking that the whole thing must just be a surreal nightmare. How could these men, not much older than the children they killed, have brought themselves to do what they did? What kind of violence and hatred were they bred on that they could torture little children before hunting them down like animals?”

How could jihadists? Well, they could because they were not only absolutely sure about the genuineness of their ideology but, and this is more important, about the phoniness of any other worldview or even viewpoint. Just like Pol Pot’s Khmer Rouge which killed about 2 million people in Cambodia during its four-year rule in the late 1970s; one in four citizens perished. In Voices from S-21: Terror and History in Pol Pot’s Secret Prison, the historian David Chandler gave the grisly details of perhaps the most gruesome death camp mankind has ever witnessed. The S-21 camp, an interrogation centre, admitted over 14,000 “enemies,” which included men, women, children, and infants. But for fewer than a dozen survivors, all were slaughtered after hideous torture.

What the Islamic State is doing in the Middle East is little different from atrocities of Khmer Rouge thugs who dotted a peaceful country with killing fields. But liberals like De and Singh seem to be ignorant of history. Hence their descent into mushiness and triteness.