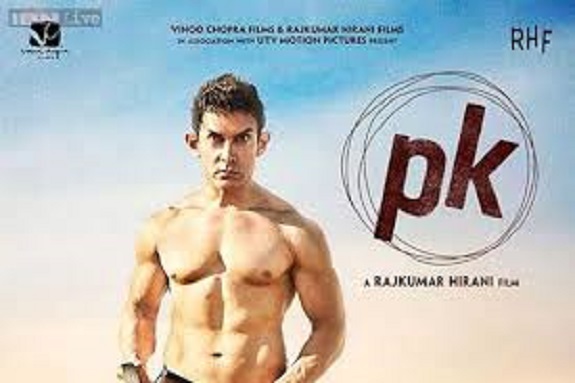 No one can deny the fact that cinema is one of the most powerful mediums of communication. Not only does it act on a physical level but also leaves deep subliminal impressions on the viewer.

The new Bollywood movie directed by Rajkumar Hirani and starring Aamir Khan, PK is one such slick production that plants, deep into the consciousness of the society, a powerful slow poison aimed at killing the raison d’etre of the powerful ancient Hindu culture.

Hindu rishis, saints and gurus raised the relevance of humanism by elevating humans to the level of God. Hindu Gurus have always been reformers and advocated modernity and adaptability. Several ancient sages are openly accepted as Gurus from the untouchable and Dalit communities.

Nevertheless, it is fashionable in Hindi films to take potshots at Hindu Gurus; to portray them as cruel thugs and conmen reeked in debauchery and immoral and unethical practices of all sorts.

What is worse is that these movies, including Singham Returns, glorify Islamic culture while contrasting it with crooked Hindu Gurus. However, it is noteworthy that since 9/11 more than 24,809 terror attacks have been attributed to radical Muslims adhering to a stone age ideology and intellect.

This Islam-first policy of many Muslim intellectuals from India is aimed at pleasing their masters in the Middle East that are largely involved in fanning fundamentalism that has brought the earth to the brink of extinction. The situation is similar with the global Christian ummah. They have waged wars on humanity for nearly 2000 years despite their Messiah, a messenger of pure love, giving up his life on a cross even while forgiving the perpetrators of this heinous crime.

Both religions are political in nature, dogma based and closed to interpretation and critical scrutiny and therefore militant and highly destructive.

[pullquote]PK is one such slick production that plants, deep into the consciousness of the society, a powerful slow poison aimed at killing the raison d’etre of the powerful ancient Hindu culture. [/pullquote]

The elements of esoteric, philosophical and experiential truth in these two religions are lost in the din of their overwhelming desire to ideologically, culturally and politically control all beings on Earth.

PK is intellectually hollow on these fronts too. It fails to acknowledge the subtler aspects of spiritual truths in Hinduism. It rejects them as pitiable needs of the weak. It suggests its own utopian version of a society where intellectuals prevail and the need for religion is not there. This in itself is a jaded concept.

Western cultures have flirted with Individualism and creativity in an attempt to replace the evils that stemmed from their religions. However, this has only given way to excessive consumption and materialism, thereby creating societies that are grappling with psychological disorders and extraordinary violence in their daily lives. In present times these same societies are witnessing a massive shift towards rejection of religious dogma, excessive materialism, over emphasis on individuality towards a spiritual lifestyle inspired mainly by Yoga, Vedantic and Buddhist philosophies.

Commercially too, PK is opportunistic. The PK team knows that it can beat up Hindus and no one will raise a hue and cry. If it does happen, it will benefit the film commercially. The producers and actors do not show the moral courage to creatively attack the fundamentalism of Islam or the Judeo – Christian world that is causing the bulk of the problems in the world.

In fact if a Hindu believes in God he also works to get what he wants. He does not pick up a gun nor sell one to gullible and brainwashed fanatics to kill. Hindus may get fooled from time to time by miscreants posing as Gurus but it is not a problem as large as that which stems from preachers propagating Islamic or Judeo – Christian Fundamentalism.

The English media houses and enemies of Hindu culture repeatedly target Hindu Gurus to weaken India to enable the spread of the religions of their payasters residing in other countries. Why couldn’t PK show the horrid influence of Maulvis and the terrorists they try to nurture? Or show war mongering from the developed countries wanting to sell weapons and to maintain their supremacy?

[pullquote]The PK team knows that it can beat up Hindus and no one will raise a hue and cry. If it does happen, it will benefit the film commercially. The producers and actors do not show the moral courage to creatively attack the fundamentalism of Islam or the Judeo – Christian world that is causing the bulk of the problems in the world.
[/pullquote]

Allegations were made against the movie by a Censor Board panel member about the fundamentalist nature of the movie but were brushed aside by Arun Jaitley, the Information and Broadcasting Minister and the controversial chief of the Censor Board Leela Samson. Her anti–Hindu stand is well known to the world at large.

That a movie like PK could pass the Censor Board of India for its crude portrayal of Hindu beliefs is shocking. It demands that accountability be pinned on these intellectually bankrupt keepers of the nation’s culture. The government should start with sacking the Censor Board chief and follow it up with criminal cases and enquiries into the team that made and funded PK. Several people have already demanded CBI investigations in the matter given the funding and hosting of its promotions by a company owned by a proclaimed terror financier.

PK, at best, is confused in what it wants to portray. At its worse it is once again a heavy blow against a society that is the most open in the world to new ideas and philosophies. It is a betrayal of one’s national creed to vested interests such as ARY, the Pakistani Media house, known for its terror links, that have funded PK.