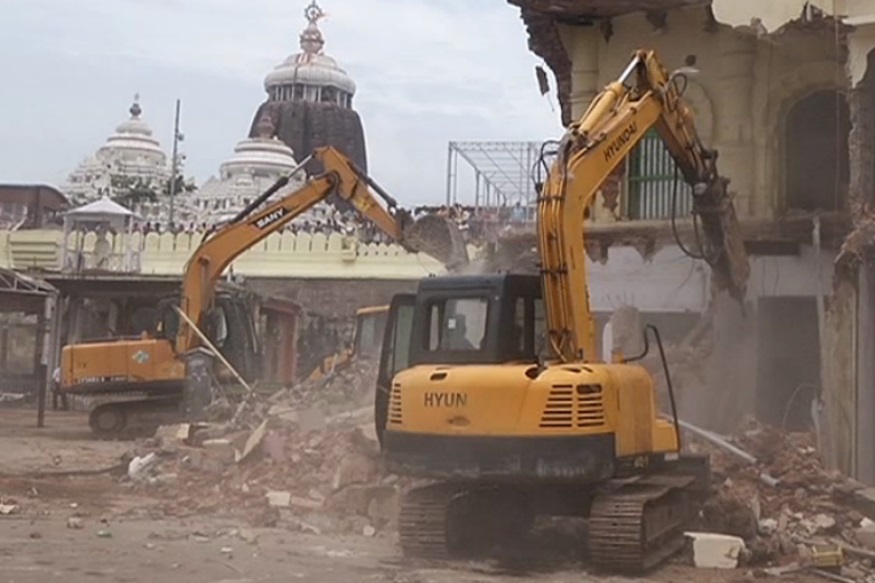 From 27th August 2019, the Puri district administration has been on a demolition spree of old structures within 75 meters radius of the Jagannath Temple ostensibly in the name of development, a Rs 500 crore mega plan to turn Puri into a world heritage city and to prevent terrorism. The demolitions were conducted based on the report of a committee headed by retired judge of Orissa High Court BP Das who recommended the removal of such structures.

Odisha Chief Minister Naveen Patnaik had approved the demolition drive and had urged people to cooperate so that security of the Jagannath temple could be ensured.

“Odias made tremendous sacrifice for the safety of Jagannath temple and the presiding deities. Our tradition is centered around Jagannath culture. But global terrorism is a big challenge. Terror groups are targeting religious institutions. So, it is imperative to implement various security related suggestions in the temple”

We must remember that it was the Ramanandi Naga Sadhus who gave their lives to protect Srimandira from the barbaric hands of Kalapahad during the middle ages.

The Emar Math belonging to the Ramanujacharya sect is one of the oldest Hindu monasteries of Puri and provided food during the time of Odisha famine in 1866. The 900 year old Emmar Matha was established by Sri Ramanujacharya himself.

Raghunandan Library, established by the Mahant of Emar Matha in 1921, to promote Odia literature has been totally demolished. Many Odia people who complained about “outsiders” occupying their land however didn’t seem to mind the demolition of a structure that was home to old Odia manuscripts. Ironically the State Government has sanctioned Rs 5 crore for a modern library to be set up in the land of the 900-year-old monastery. The library will be equipped with all modern facilities for readers and its name will be retained as the Raghunandan Library.

These ancient Mathas have a huge Dharmic significance for practicing Hindus. Many of them have preserved rare murals, manuscripts, sculptures and numerous other historical artifacts.

While conducting the demolition drive, Official stumbled upon an underground chamber under the Emar Mutt monastery that was about 12-15 feet deep and 50 feet wide. Immediately a Snake Helpline NGO was called to see if there were any snakes inside. Mathadhipath of Emar Mutt, Mahanta Rajgopal Ramanuj Das, said the chambers served as granaries during times of distress and store food for distribution during the 1866 Odisha famine.

2 petitions were filed in the Supreme Court to stay the demolition. One was from a Chennai resident, and another by the Intercontinental Lawyers’ Association. Both were dismissed by the Supreme Court.

A silent protest was held by the Mahant Rajgopal Ramanuj Das.

Shankaracharya of Puri, Swami Nischalananda Saraswati alleged a conspiracy behind demolition of mutts and other religious institutions in Puri. He stated that the BP Das Commission had not taken any suggestions and feedback from the stakeholders in this connection. He also criticized the Supreme Court-appointed Amicus Curiae Ranjit Kumar for not taking any advice or suggestions from him before taking any decision or submitting the report to the apex court in this connection. The Shankaracharya insisted that all this was an attempted to secularize what are clearly Dharmic spaces, and this facilitate the take-over and control by the State.

“Whatever report submitted by Amicus Curiae and Das Commission to government and the Supreme Court, respectively is completely invalid. As BP Das Commission submitted its report without consulting the head of the religious institution, the report is a conspiracy to declare Puri Srimandir as a secular entity instead of a religious one,”

Shankaracharya further points out that this is part of a larger project to secularize, desacralize, trivialize and commercialize all aspects of Hindu Dharma. We have already seen this in action in cases like Sabarimala, Jallikattu, Made Snana, Diwali and Dahi Handi rulings where judiciary and executive together have started taking unilateral decisions on Hindu/ Dharmic practices. So in the context of Rath Yatra timings, the Shankaracharya adds:

“As per the Skanda Purana, chariots of the deities should reach Gundicha temple on the same day during Rath Yatra. But now it is being said that chariots should not be pulled after sunset. I want to question whether Samiti, CM or Law Minister are the right persons to decide on such religious traditions”

Puri MLA Jayant Sarangi has opposed the demolition drive. He said that eviction of houses and temples near the Jagannath Temple was without basis and a conspiracy, and no blueprint has been made public by the administration. He added that while he supported development of Puri, he was opposed to how the administration worked on the demolition drive without taking people into confidence and disregarding standard operating procedures. He also doubted the official reason of these mutts being unsafe as a reason for demolition.

The Odisha chapter of Indian National Trust for Art and Cultural Heritage (Intach) expressed its reservation on the demolition and suggested that many of the old structures could easily have been restored with proper conservation. According to Amiya Bhushan Tripathy on Intach:

“These old religious places bear sacred significance and are an integral part of the Jagannath culture. The mutts of Puri, unlike those in the rest of the country, have a symbiotic relationship with the temple and the deities, and have important roles to play in the daily ceremonies and yearly rituals, including the world famous Rath Yatra,”.

In any other country these temples would have been declared as heritage monuments, and been carefully preserved and maintained. But that is not so in India were temples are treated as expendable structures by the Hinduphobic and ultra-secular State Administration. The same state will however never do such “demolition drives” for churches and mosques and will instead go out of the way to appease church heads and Imams/ Muftis/ Maulanas.

Odisha CM has promised to “rehabilitate” the Mathas. Rather than repairing, rebuilding and preserving such ancient heritage structures, he would have them demolished. This is a peculiarly strange stance. Deities are not mere stone idols but rather living persons and the temple is their home where they have been residing since prana pratishtha centuries ago. They cannot simply be moved at will as if they were some museum artifacts. In Dharmic traditions such movement is not allowed under normal circumstances.

Moreover such rehabilitation lead to loss of cultural heritage. Many of the families in charge of the Mathas have been doing so for centuries without any state support. And it is precisely such kind of people who get affected by the secular state’s temple demolition drives. We lose not only the knowledge and tradition, but also the ancient lineages of knowledge-keepers are destroyed as they see no incentive to preserve such knowledge in the face of a greedy Adharmic secular state which is out to get them.

Planned demolition of the 500 year old Bada Akhada Mutt by district administration was postponed after strong protests by mutt sants. Mathadhipati Harinarayan Das said that the mutt neither posed a threat to the temple and nor was it unsafe as claimed by government officials. He categorically stated that the State administration was victimizing them.