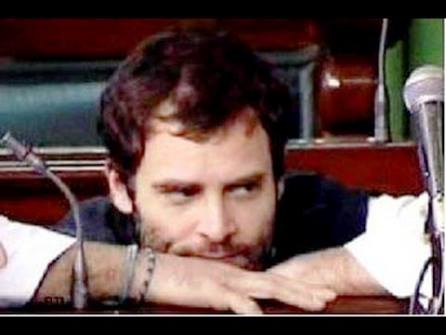 In holding up Rahul Gandhi as hero Congress has deeply offended talented, high achieving people by placing privilege of birth above character and achievement. To go with it, he and his family are seen as more interested in looting the nation than serving it.

The Congress campaign is in a sorry state. Going by opinion polls and the public mood, and attendances at rallies, Narendra Modi has a gigantic wave of supporters compared to Rahul Gandhi, and the gulf is widening almost daily. Congress leaders seem to be clueless about the reasons behind his unpopularity. Apparently they fail to realize that projecting such a total non-achiever as the leader of a great nation is deeply insulting to honest, hard working people. Worse, he and his family are seen as more interested in looting the nation than serving it—choosing plunder over patriotism.

While the Congress is doing its level best to project Rahul as a youth icon, whatever support he enjoys seems to be coming from the older generation still nostalgic about the Nehru-Gandhis. The younger generation sees him as a zero-achiever with a personality that has not grown beyond being his mother’s favorite. At his age, a not so young forty-three, most people will have a record to show, but not this middle-aged mother’s favorite who is being projected as a child prodigy. By any measure, his popularity is sinking; apart from professional politicians with a stake in his position and family retainers like Digvijay Singh and Jairam Ramesh, no one has anything good to say about him.

But there is more: both in India and abroad, the idea of Rahul Gandhi as India’s next leader is met with a resistance bordering on hostility. This is especially noticeable among Indians living and working in the Middle East and Southeast Asia at places like Hong Kong and Singapore. Indians are a proud people.  Many may come from humble origins (like Narendra Modi) but have risen to the top through talent and hard work. They are highly respected as professionals and managers for their talent and integrity. It is because them, and scientists in the U.S., that Indians are respected everywhere, not because of its politicians.

These Indians are also proud of their country and their heritage. Increasingly they feel their country and its institutions have been hijacked by adventurers with no loyalty or culture but with the sole aim of plundering the country’s wealth. The succession of scams with the Gandhi family fingerprints all over them has suddenly made them feel ashamed of themselves. They fear that increasingly they will be judged by the misdeeds of their political leaders, more, especially, the Gandhi Family. What has any member of the family done that the country can be proud of?

The situation is made worse by the total lack of Indianness displayed by Rahul Gandhi. He speaks Hindi, but his rhetoric shows no understanding of India beyond his family. His roots, as with other members of his family are in Italy. In his public utterances there are no references to Indian history, literature or cultural traditions. (He seems to have no culture or literary tastes of any kind, but that is a different matter.) To go with this philistinism, his personality is utterly humorless. His identity is entirely with his family, that too his mother’s family and friends.

Rahul Gandhi seems to think he should be allowed to have anything he wants in India, no questions asked. (Italians will not of course countenance such demands, but apparently his Indian followers do.) This was most clearly seen when Sonia and Rahul appropriated for themselves the assets of the newspaper National Herald (founded by Jawaharlal Nehru) through dubious financial methods. This was followed by the blatant plundering of land in Rajasthan and Haryana by the son-in-law Robert Vadra in what appeara to be highly irregular real estate transactions.

This being the case, why should anyone be surprised if the ‘Family’ is seen as a gang of foreign adventurers interested only in plundering the country’s wealth while using the family name as cover? What service to the nation have Sonia Gandhi, Rahul Gandhi, Robert Vadra— not to mention Ottavio Quattrocchi and a host of other camp followers rendered to the nation? Is it any wonder that the Congress and the ruling establishment are viewed with hostility and shame by Indian youth?

To return to Rahul Gandhi, it is obvious he has not learnt a basic lesson: respect cannot be given, it has to be earned. It doesn’t matter what you think you are worth, others judge you by what you have done, not what you tell them you will do, especially when you are past the age when you can expect the indulgence because of youth. People who show you respect for something you have not achieved are only sycophants with axes to grind. In short, sycophancy is not respect, much less honor.

Sycophants never lift a person, they only bring him down. Be it Digvijay Singh, Jairam Ramesh or anybody else— no amount public flattery can conjure up a record for Rahul Gandhi that he himself has not earned. They know this; that is why they have made his opponent (Narendra Modi) their target of abuse. This is like spitting at the sun— it recoils on one’s own face. But they have nothing of substance to show as Rahul’s achievement— you cannot create something out of a vacuum.

There is another problem: on what record does anyone, his sycophants included sell Rahul Gandhi as the nation’s future? Since they cannot do this, they abuse his opponent. It reached the bottom when a Congress proxy from SP claimed that Modi is unfit to be PM because he began his life as a humble tea vendor. It is an honest line of work, much honest and respectable than plundering the nation’s wealth.

If this has to be a valid criterion for fitness to hold high office, what is Sonia Gandhi’s qualification? Her past is carefully concealed, but it is generally agreed that she was a cocktail waitress at a not-so-glamorous bar in Cambridge before her marriage to Rajiv Gandhi changed her fortunes. Where Narendra Modi was a tea vendor, Sonia Maino was a barmaid.

Resort to personal attack that has degenerated into abuse shows the bankruptcy of the Congress and its candidate. If humble origins is a disqualification— it would go to disqualify Sardar Patel, B.R. Ambedkar and Abraham Lincoln. And Sonia Gandhi. Yet it is the privilege of his birth, not anything he has achieved—which is zero—that is Rahul Gandhi’s only qualification. This is deeply insulting to honest people.

On August 28, 1963 the Civil Rights leader Dr. Martin Luther King in what was perhaps the greatest speech of the twentieth century declared: “I have a dream that my four little children will one day live in a nation where they will not be judged by the color of their skin, but by the content of their character.”

But Rahul Gandhi and his sycophants would have none of this. They dream of a day when only privilege of birth, not content of character would qualify one for high office. They would exclude anyone of humble origin, regardless of character and achievement from high office— except a certain cocktail waitress and her associates.