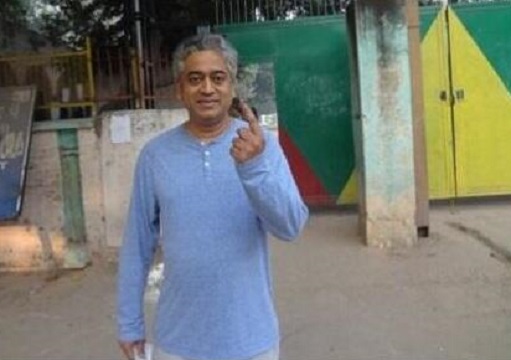 Beginning in the late 1980s and throughout most of the 1990s, the slogan Garv Se Kaho Hum Hindu Hain’ was countered with ‘Communalism/Fascism is on the rise’ headlines on several newspapers. If translated in English the aforementioned slogan meant ‘Say with pride that we are Hindus.’ But to secular ears that sounded more like ‘Sieg Heil’ or ‘White is Right.’ That explained the phenomenon of associating the Hindu Nationalist movement with the National Socialists and the Ku Klux Klan.

But now we are hearing a different refrain: on 14 November, journalist with a moral compass Rajdeep Sardesai penned a piece on Hindustan Times defending his blatant display of caste pride stating that pride does not equal discrimination. Since the secularists cannot commit any crime, their slippery moral compass can point in any direction, even if it’s the direction they advise others not to take.

Narendra Nath Dutt, subsequently, known by the religious nomenclature of Swami Vivekananda. Like Tilak, Dutt was also a prophet of Hindu nationalism. He was also a believer in the cultural superiority of the Indian people, and held that on this cultural basis should be built the future Indian nation’ He preached that Hinduism, not Indian nationalism, should be
aggressive. His nationalism was spiritual imperialism.. … In their religiousness and wild spiritual’ imperialism they embodied the reactionary social forces.

That is an extract from the History of the CPI published in 1971. Now how is that relevant in Rajdeep’s context? On 21 January 2013, Outlook published excerpts from a book on Swami Vivekananda by Jyotirmaya Sharma, where among other things the Swami was called a Hindu supremacist. Why? Because Sharma had issues with Vivekananda finding the source of universal brotherhood in Vedanta, and so like the Marxists he found the Swami’s love for national heritage analogous to ‘National Socialism.’

Long after India gained independence, Vivekananda like other hallowed icons of our nation which include Sardar Patel and Babasaheb Ambedkar had to take a backseat as all the glories were showered upon the Nehru-Gandhi family by the Nehruvian ecosystem.

But in 1993, following the demolition of the Babri structure in Ayodhya in 6 December 1992, the then HRD Minister Arjun Singh attached considerable importance to celebrating the centenary of Swami Vivekananda’s speech at the Parliament of Religions in Chicago. The same man who was a spiritual reactionary had suddenly become a national icon.

The secular eminences of the time wanted to differentiate Vivekananda’s pride for India from what they considered communalism since they wanted to belittle the surge of nationalism India was witnessing by delineating it from its inspirations.

The following is a statement which the second chief of the RSS MS Golwalkar gave to some media persons in 1970:

Yet even now this same man’s name is synonymous with Fascism. Was he not advocating the minorities to have pride for our national heritage?  So can the secular eminences clarify their understanding of the terms pride and prejudice? Indeed, one of the chief sources of mischief lies here.

If you skip to 15:45, Rajdeep Sardesai himself can be seen stating that the Savarkarite mentality has no place in modern India. To validate his claim we need to see how Savarkar–the man who coined Hindutva and advocated a Hindu Rashtra envisioned the nation of India:

1. Some of us are monists, some, pantheists; some theists and some atheists. But monotheists or atheists-we are all Hindus and own a common blood. We are not only a nation but a Jati, a born brotherhood. Nothing else counts, it is after all a question of heart. We feel that the same ancient blood that coursed through the veins of Ram and Krishna, Buddha and Mahavir, Nanak and Chaitanya, Basava and Madhava, of Rohidas and Tiruvelluvar courses throughout Hindudom from vein to vein, pulsates from heart to heart.

2. Let the Indian State be purely Indian. Let it not recognize any invidious distinctions whatsoever as regards the franchise, public services, offices, taxation on the grounds of religion and race. Let no cognizance be taken whatsoever of man being Hindu or Mohammedan, Christian or Jew. Let all citizens of that Indian State be treated according to their individual worth irrespective of their religious or racial percentage in the general population…

That was a statement made by the current Prime Minister Narendra Modi last year during an interview with international news agency Reuters. Was that jingoism Mr. Sardesai?

[pullquote]Beginning in the late 1980s and throughout most of the 1990s, the slogan Garv Se Kaho Hum Hindu Hain’ was countered with ‘Communalism/Fascism is on the rise’ headlines on several newspapers. If translated in English the aforementioned slogan meant ‘Say with with pride that we are Hindus.’ But to secular ears that sounded more like ‘Sieg Heil’ or ‘White is Right.’ [/pullquote]

If the answer is no then why did the secular journalists of your ilk create such a furor over it? How did he become a polarizing figure because of this statement?

If you still insist that the answer is yes, then Mr. Sardesai, using your own logic you are a casteist.

This was you raising false alarm when a respected journalist, Gaurav Sawant made the following claim:

Your tweet caused many secularists in the social media and elsewhere raise the demand to sack Gaurav Sawant, an ugly concerted attack against one honest journalist. For more information on how the whole affair de disgrace worked, read: http://www.indiafacts.co.in/media-launched-concerted-attempt-gag-gaurav-sawant/.

[pullquote]Long after India gained independence, Vivekananda like other hallowed icons of our nation which include Sardar Patel and Babasaheb Ambedkar had to take a backseat.[/pullquote]

So how fair is it Mr. Sardesai that the media shows only one side of the story while conveniently sidestepping the facts? And how ethical was it for you to tweet what you did when one journalist exposed this secular hypocrisy?

Moral Compass of the story

For long ‘nationalist pride’ was equated to ‘bigotry’ thanks to the shrill efforts of your kind. Since the tables have turned post 16 May, you and your ilk have now started to speak about differentiating between pride and prejudice.

Unfortunately you forgot Mr. Sardesai that the secular wickets can be taken off if a nationalist googly is bowled. Which is exactly what happened to you after May 16. And using the same moral compass you bequeathed to us, we can state that ‘caste pride = casteism.’ It is after all, your own logic.