Ram Puniyani uses caste as an excuse to bash the RSS 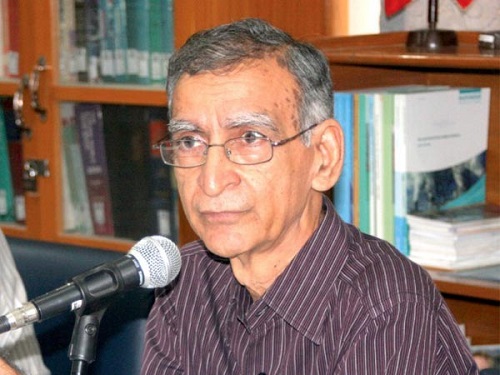 On the 8 November edition of Tehelka, the well-known secular activist Ram Puniyani expressed disapproval of the Sangh’s so-called attempt to ‘hide historical truth’ of untouchability which he states is motivated by their political agenda.  His allegation is based on the claims made by RSS leaders that ‘the shudras were never untouchables during the Vedic age, and that the stigma of untouchability entered Hindu society, following the Muslim invasions in  the medieval era.’

These statements were made on 22 September during the release of three books penned by BJP spokesman Vijay Sonkar Shastri— “Hindu Charmakar Jati”, “Hindu Khatik Jati” and “Hindu Valmiki Jati”.

Regarding such statements, I already pointed out that the subject of caste must be studied with precision and in-depth research of reliable primary sources.

Mr. Puniyani while alleging the RSS of hiding truths, himself has diligently unveiled his unawareness on the matter as shown in the following extract:

…… the origin of the caste system predates the “Muslim invasion” by many centuries. The Aryans considered themselves superior and called the non-Aryans krshna varnya (dark skinned) and anasa (those with no nose). ……

…..Both the Rig Veda and Manusmriti prohibited the lower castes from coming close to the upper castes. They had to live outside the village. Society was divided into four varnas during the Rig Vedic times and this developed into a rigid caste system by the time of Manusmriti.

Firstly, Mr. Puniyani you do realize that this is 2014 and at least a decade has passed since the cessation of the discredited Aryan/Non-Aryan theory.The fact that you still believe in this Marxist-Colonial absurdity discounts your allegation of the RSS being truth deniers. Now unlike the secularists of your ilk, I place on record these uncomfortable truths beginning with this extract from Dr. BR Ambedkar’s ‘Who Were the Shudras’ :

…..Enough has been said to show how leaky is the Aryan theory expounded by western scholars….. Yet, the theory has such a hold on the people that what has been said against it may mean no more than scotching it. Like the snake, it must be killed…..In the face of the discovery of new facts, the theory can no longer stand and must be thrown on the scrap heap.

Now many scholars have often argued that many injunctions of the Manusmriti (which is more of a social text than sacred) were often at odds with the Vedas on several important points relating to the so-called caste system.

The reason for this is the fact that there was never a single body of an overarching law which legitimized a uniform legal code for Hindu community, and all smritis acknowledged that actual enforcement of the law was in the hands of the local communities.  Lastly, the Hindu tradition has clearly mentioned that the Manusmriti is not to be followed in the Kali Yuga, that is, our age.

As far as regarding the Rg-Veda’s stance on caste, most of the discussions are centered on this verse of Purusha Sukta :

In this hymn the Cosmic Man is pictured as the human body with the various parts embodying different classes of the society – scholars, kings, businessmen and workers.

[pullquote]It seems that Mr. Puniyani only read the preface and not the contents of Dr. Ambedkar’s Revolution and Counter-Revolution in Ancient India.[/pullquote]

But the Purusha Sukta does not stop with origin of the society as it also explains the origin of various other components of the universe:

By extending the same spurious logic that Shudras are inferior because they originate from the feet, all human beings are inferior as well because planet earth also emanated from the cosmic man’s feet. This hymn which led to varna-vyavastha was intended to ensure the harmonious functioning of the society and not to enforce a brutish hierarchy.

And for your information Mr. Puniyani, this is what Babasaheb Ambedkar wrote on Varna in his splendid work Annihilation of Caste:

No attack on the RSS is complete without vilifying M S Golwalkar,and Mr. Puniyani does not disappoint us:

MS Golwalkar, a pioneering ideologue of the RSS, defended the caste system in a different way. “If a developed society realises that the existing differences are due to the scientific social structure and that they indicate the different limbs of the social body, the diversity would not be construed as a blemish,” he wrote in an article for the Organiser in 1952.

How the aforementioned statement defends untouchability is for Mr. Puniyani to explain. But very conveniently, he does not mention this statement also made by Golwalkar:

As the older dried branches fall off a growing tree, to give place to the new ones, the society would shed Varna Vyavastha the existing social structure at one time and give place a new necessary one. This is a natural process of the development of the society. … I have told you once that for the sake of construction of a new house, old house requires to be destroyed.Similarly purturbed social system must be put to an end here and now and should be destroyed root and branch. Going further we should proceed to establish a pure and harmonious society on the basis of pure Nationalism. From Sri Guruji ka Samajik Darshan, 2006.

At the concluding stage of this uninformed piece Mr. Puniyani claims:

BR Ambedkar saw the struggles against the caste system as a ‘revolution’ and the reinforcement of the system as a ‘counter-revolution’. He divided the ‘pre-Muslim’ period into three stages: Brahminism (the Vedic period); Buddhism, connected with the rise of the first Magadh-Maurya State and representing the revolutionary denial of caste inequalities; and ‘Hinduism’, or the counter-revolution that consolidated Brahminical dominance and the caste hierarchy….. The rigidity and cruelty of the caste system and untouchability intensified during the post-Vedic and Gupta period.

It seems that Mr. Puniyani only read the preface and not the contents of Dr. Ambedkar’s Revolution and Counter-Revolution in Ancient India. This work of Ambedkar squarely disproves the earlier claims of Puniyani like ‘the Aryan/Non-Aryan theory’ and ‘Vedas prohibiting the lower castes from coming close to the upper castes:

The Shudra was accepted as an Aryan and as late as Kautilya’s Artha Shastra was addressed an Arya. The Shudra was an intergral, natural and valued member of the Aryan Society isproved by a prayer which is found in the Yajur Veda and which is offered by the Sacrificer. It runs as follows: “……… Gods, Give lustre to our holy priests, set lustre in our ruling chiefs, Lustre to Vaisyas, Sudras : Give, through lustre;  Lustre unto me.”

It is a remarkable prayer, remarkable because it shows that the Shudra was a member of the Aryan Community and was also a respected member of it.

In the post-Vedic period preceding Manu there was group of the representatives of the people called the Ratnis. The Ratnis played a significant part in the investiture of the King. The Ratnis were so called because they held the Ratna (jewel) which was a symbol of sovereignty. …….It is a significant fact that the Shudra was one of the Ratnis.

Shudras were members of the two political Assemblies of ancient times namely the Janapada and Paura and as a member of this he was entitled to special respect even from a Brahmin. That the Shudra in the Ancient Aryan Society had reached a high political status is indisputable. They could become ministers of State. The Mahabharat bears testimony to this…….

…The system of Chaturvarna of the Pre-Buddhist days was a flexible system and was an open to system. This was because the Varna system had no connection with the marriage system. While Chaturvarna recognized the existence of four different classes, it did not prohibit inter-marriage between them. A male of one Varna could lawfully marry a female of another Varna…..

[pullquote]For long, the self-styled secularists of  Puniyani’s camp played hide and seek with the Indian public regarding historical facts but now that they are losing the plot, and with their patronage and ideology gone,  accusations of foul play against the RSS are not surprising.[/pullquote]

It is a historical truth that even under Buddhist rule in India, untouchables existed. Buddhism’s stress on asceticism and ahimsa made it condemn certain occupations like hunting, handling corpses, skinning dead animals and so on. The travelogues of the medieval Chinese pilgrim Hieun-Tsang mention how groups associated with the aforesaid occupations like the Nishadas and Chandalas resided far from urban centres as they were not supposed to approach the virtuous residents due to the nature of their work.

In Sri Lanka and Japan, Buddhism incorporated itself into the existing socio-political set-up. There is no known case of any Buddhist works opposing the harsh treatment meted out to commoners in these countries by the landlords and the Samurais.

Also an important point to make here would be that rulers of almost all great Indic dynasties originally hailed from the Shudra “caste.”    Mr. Puniyani is obviously oblivious of the fact that Hindu nationalists bestow admiration on two outstanding emperors neither of whom belonged to the much-derided upper-caste: Chandragupta Maurya and Shivaji. Chandragupta Maurya is hailed as the one who united ‘Bharatvarsha’ while Shivaji is hailed as the ‘savior of Hindus’ from Mughal tyranny.

And regarding medieval Muslim invasion, this is what Ambedkar stated:

The Muslim invaders, no doubt,came to India singing a hymn of hate against the Hindus. But, they did not merely sing their hymn of hate and go back burning a few temples on the way. That would have been a blessing. They were not content with so negative a result. They did a positive act, namely, to plant the seed of Islam. The growth of this plant is remarkable. It is not a summer sapling. It is as great and as strong as an oke. Its growth is the thickest in Northern India. The successive invasions have deposited their ‘ silt ‘ more there than anywhere else, and have served as watering exercises of devoted gardeners.

Its growth is so thick in Northern India that the remnants of Hindu and Buddhist culture are just shrubs. Even the Sikh axe could not fell this oak. Sikhs, no doubt, became the political masters of Northern India, but they did not gain back Northern India to that spiritual and cultural unity by which it was bound to the rest of India before HsuanTsang. ……..

For long, the self-styled secularists of  Puniyani’s camp played hide and seek with the Indian public regarding historical facts but now that they are losing the plot, and with their patronage and ideology gone,  accusations of foul play against the RSS are not surprising.

Sources of Hindu Dharma – I