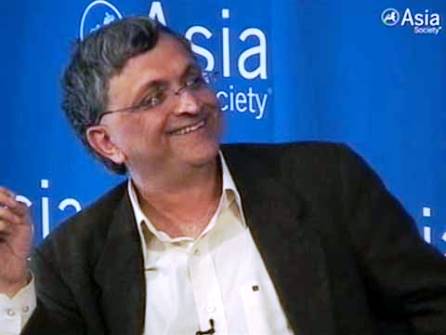 Going by the tomes he has written as well as by his tweets, it is evident that Ramachandra Guha’s timeline of Indian history begins with Mahatma Gandhi and ends with Nehru. It appears as though according to Guha, there existed nothing worthwhile in Indian culture prior to the advent of Gandhi. Case in point: an article that appeared in the Hindustan Times.

First he says that till the 19th century, Indians did not have what Guha calls real philanthropy. Till then, Indians apparently did only communal charity, whatever that means. And then, based on this absurd distinction, Guha claims that Hindu banias who funded many public institutions inspired by Gandhi, did so only at Gandhi’s behest. More importantly, Guha says, Gandhi’s conceptions of charity were deeply influenced by Christian traditions of charity and social justice:

Philanthropy for social good must be differentiated from communal charity, where, for example, poor Brahmins or sick Jains are given a leg up by the more fortunate members of their community. The first real philanthropists in India were the Parsis of Bombay, who, in the 19th century, build roads, hospitals, parks, schools and colleges for their fellow citizens (themselves mostly Hindus and Muslims)… To be sure, the capitalists who, inspired by Gandhi, funded public institutions were often banias. However, they would not have done what they did without the Mahatma’s challenge. And since Gandhi himself was deeply influenced by Christian traditions of charity and social justice, in acting as they did, they were themselves being somewhat un-bania-like.

All these assertions are far from the truth. Explaining the important societal role that charity played in India, Rajaji, hailed as the Mahatma’s conscience keeper, said:

It is Indian culture, the duty of sharing one’s prosperity with one’s community, what may be called decentralized socialism, without the compulsions of statist policy but enforced by effective social odium on failure. The duty of looking after the tribe and the duty of looking after the local community, a larger circle than the tribe and related to place rather than blood, are both emphasized in our shastras and in Samskrit and Dravidian literature.

Indeed, the concept of Daana (loosely meaning charity) is unique to Indian culture. Daana was considered to be the three pillars of an ideal society, the other two being Yagna and Tapas. All great men who walked on the country’s soil reinforced this ancient Vedic concept. There are many instances in Hindu Puranas, epics, Sanskrit plays, folklore and traditional stories of people—kings and commoners alike- attaining immortality in people’s minds because of their charity. Men like Bali and Karna in the Mahabharata are regarded as the embodiment of generosity. Kings were revered and remembered equally if not more for their generosity than for their valour.

As a sacred duty, Daana was not expected only of kings and wealthy people–it was seen as a necessary societal responsibility, which had to be fulfilled by each individual. The Ramayana and Mahabharata have numerous anecdotes of very ordinary people showing exemplary generosity only because they considered charity to be a sacred duty. Every person had a duty to serve his family, his community and through them, contribute to the larger societal good. However, Guha fails to understand this traditional concept and makes an impossible distinction:

Philanthropy for social good must be differentiated from communal charity, where, for example, poor Brahmins or sick Jains are given a leg up by the more fortunate members of their community. The first real philanthropists in India were the Parsis of Bombay, who, in the 19th century, built roads, hospitals, parks, schools and colleges for their fellow citizens (themselves mostly Hindus and Muslims).

One fails to undestand what Guha means when he says, “philanthropy for social good must be differentiated from communal charity.”  This goes against both commonsense and elementary logic. Doesn’t charity made to a specific community also serve the good of the society of which the community is a subset? Guha’s bizarre understanding of the concept of charity again holds a mirror to his poor understanding of the Indian society. It is surprising that Guha, whose claim to fame is his work on Gandhi and Nehru, is not aware again, of what C. Rajagopalachari had to say about this distinction in charity in his book titled Our Culture:

Helping oneself is selfishness. It generally escapes criticism. Helping one’s family is called nepotism by those who do not belong to the family. Helping the community is called communalism by those who fall outside the jaati. Helping the local community covering everyone in a territorial unit irrespective of jaati is given derogatory names of parochialism and provincialism. We give a term of abuse taking up for disapproval what the sense of obligation does not include, rather than feeling comforted seeing that it includes a wide circle outside of one’s self, and works out an effective kind of decentralized socialism. We fail to consider that if everyone in prosperity felt the obligation even as limited to his circle, the entire nation would be satisfactorily covered in this voluntary way, leaving a minimum to the state to fill any gap left out. There are fortunate and prosperous men in all communities and all of them would, if encourages, be willing to be unselfish each in respect of his own circle. They would do this very willingly, much more willingly than pay taxes to the welfare state.

Indeed, it appears as if Rajaji had people like Guha in mind when he insightfully observed:

We see a man thinking of others than himself, who are related to him in some way, restraining his egotism and sharing his substance with them cheerfully. But we are not pleased with this. We quarrel with him for not sharing it with those not related to him by blood… We see a man sharing his prosperity and opportunities with others in his community or town or district. We do not congratulate him on that account. We blame him for his ideas and attachments not going beyond his large family and jaati circles or beyond his district… We fail to be pleased with what we have and even refuse to see it and dwell with bitterness on what we do not have, and believe that that bitterness will help us.

While Rajaji was deeply rooted in Indian culture and traditions, Guha is uprooted to the same extent, which explains why he is blind to obvious truths. Guha either suppresses or is ignorant of the hundreds of Dharma Chatras (free rest houses), has never heard stories of rich men in the village who renovated the village tank, of contributions made to local schools and colleges, of donations made to build tourist rest houses, contributions to temples and mutts, orphanages and old age homes in countless villages and towns across India. Even to this day, many if not most, government schools and hospitals in our villages are built on land donated by some large-hearted philanthropist in the village. Don’t all these contribute to societal good Mr. Guha?

Based on these misleading claims, Guha makes another fabulous assertion:

First, although Hindus are in an overwhelming majority in India, Hindu businessmen in general, and bania businessmen in particular, have been less willing to contribute to society.

First, this statement is as casteist as it can get. Indeed, it is a slur directed specifically at a particular caste. This apart, it reeks of ignorance. It is surprising that Ramachandra Guha, who is a Gandhi-specialist historian, is not aware that industrialist G.D Birla, one of Gandhi’s biggest supporters, was a Bania. What evidence does Guha have to back this claim that Hindu businessmen have been less willing to contribute to society? Opinions cannot be presented as facts. More so opinions rooted in ignorance and prejudice. So let’s look at the facts that counter Guha’s casteist assertion.

Charity is considered a sacred duty in Indian culture. Before the commercialization of education, disseminating education was considered a sacred societal duty – Vidya Daana. Even giving one’s daughter in marriage was considered a sacred act – Kanyaa Dana. And then there’s Anna Daana—feeding people irrespective of caste and creed—which happens in thousands of temples and mutts across India every single day even as we speak. One can add hundreds of such examples to this list. But Guha’s deep-seated hatred and/or ignorance of Hindu culture does not allow him to see or acknowledge anything valuable in it.

Of the many stories in our culture that propound the virtue of generosity, one story from the Anushasana Parva of the Mahabharatha holds a very poignant message.

After becoming victorious in the Kurukshetra war, the Pandavas, in order to consolidate their power, performed the Ashwamedha Yagna. On the final day of the Yagna, King Yudhishtira and his brothers generously gave away gifts to all. The charity made by the Pandava brothers on that day was unprecedented.

From somewhere, there came a mongoose half of whose body was golden. The mongoose, in great anticipation of something, went near the Yagnakund (sacred sacrificial pit) and rolled over the ashes. However, it seemed terribly disappointed. The mongoose then went to Yudhishtira and said, “A handful of barley meal given by a poor family is superior to all the rich offerings and gifts you have made today.” The mongoose then narrated this story:

In Kurukshetra, there lived a poor Brahmin with his wife, son and daughter-in-law. The family could afford to eat only one meal a day.  Once, there was a great famine in the region and food was difficult to come by. However, one mid-day they managed to obtain a few handfuls of barley and cooked a meal. The family was all set to have its first meal after several days.

At that moment, unexpectedly, there arrived a mendicant at their doorstep and begged for food. The poor family happily welcomed him inside and the Brahmin offered his share to the guest. The mendicant, however, was still hungry. Then, the Brahmin’s wife offered her share. The mendicant still remained hungry. Next, the son and the daughter-in-law unhesitatingly offered their shares to the mendicant, whose hunger then finally quenched. The poor man’s family, which had gotten its meal after several days, had to go hungry again. But they were not distraught; they were indeed happy that they could feed a poor man who came seeking food to their doorstep. The poor mendicant was none other than Yama in disguise. He was pleased with the generosity and the devotion of the family and took them to heaven.

I was watching all the happenings from my hole. After they left, I came out and rolled over the place where the mendicant ate his meal. The parts of my body that touched the leftovers turned golden. Since then I have been going to many places to see if I could turn the other half of body golden. But sadly, I have not yet come across an act of charity done with absolutely no consideration for anything in return.  So, none of your Yagna offerings have been equivalent to the Anna Dana made by the poor yet generous Kurukshetra family.

Saying this, the mongoose went away. The Bhagavad Gita calls this principle Sattvic Daana or Righteous Charity:

Charity which is given without consideration of anything in return, given as a matter of duty to one qualified; that charity alone is regarded as good.

There is a yawning need for much of today’s philanthropists to revisit this ancient ideal. Intellectual honesty demands that Ramachandra Guha stop distorting public discourse by ill-informed assertions about Hindu culture and society.

The Need for a Kshatriya Mindset: Part 1