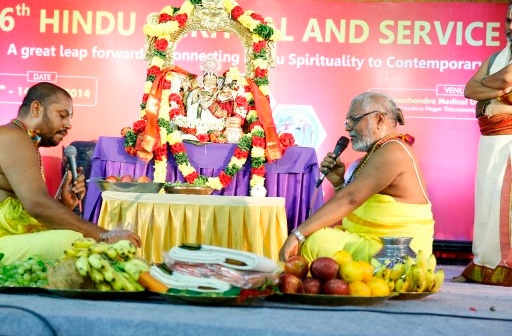 The Hindu Spiritual and service fair organized annually across the country in several cities offers a kaleidoscope view of various Hindu organizations and their activities. The HSSF fair comes to Bangalore usually in the month of December. This year the fair took place at the National College Grounds, Basavanagudi between December 14 and December 18.

Hindu spiritual organizations, traditional mutts and NGOs are allocated stalls where they can present to the general public, a display of their projects and charity work along with selling items like books and other artefacts. Usually organizations local to the state participate more in number. There are several Hindu organizations, which are doing tremendous amount of charity work and/or spreading knowledge, both secular and spiritual, to a large number of people. Yet, these activities are not covered by our anglicised media. This lacunae created by the mainstream media has been filled by this platform, which has come as a boon for Hindu organizations and the Hindu community to interface with each other.

Our organization Nimittekam received an invitation to participate in the fair; we gladly and humbly accepted the invite. It is not every day that we get a chance to showcase our NGO’s work and vision to several thousands of visitors.

The organizers did a great job in planning and providing necessary infrastructure and resources for the event. Needless to say that all the basic amenities like accommodation and food for participants from various organizations were provided. Security arrangements were quite good. I would like to congratulate the organizers and their volunteer team for pulling off this grand and successful fair. We had schools, who sent their wards, we had thousands of families, who had a good time at the fair and also seekers of philosophy catching up with their respective mutts or organizations. There were no shortcomings whatsoever and I have nothing to say to the organizers of the event except convey my heartfelt gratitude to them.

But, I do have something to say about the speakers, who came to the event. Several of them spoke about Hinduism in a generic way. We were quite busy attending to the visitors at the stall and raising awareness about the cause we espoused. But the sound-bytes we heard and read in the local dailies were quite defensive. Often repeated clichés like “Hindu religion is a tolerant religion, it has never invaded other lands”, etc. were heard. At this point in time, the Hindu community is facing an onslaught from Abrahamic religions and constitutional discrimination on its own turf. If Hindu community is to survive this ordeal, it is high time the community comes to see the truth as it is.

We are a wounded civilization, which has been facing onslaughts from foreign religions intent on eliminating the indigenous philosophy and culture of this land for many centuries now. It is high time we realize this reality and start taking corrective measures. The clichés about tolerance is not only misleading, but it further pushes the community into complacency, in which it is already neck deep in. I personally hope that in the coming years, we do develop a leadership, which does not play to the gallery and has the courage to take the burning issues and one that does not refrain from calling out a spade.

Our organization Nimittekam (www.nimittekam.org) works for the rehabilitation of Pakistani Hindu refugees in India. We had participated in the fair to raise the awareness about the plight of Pakistani Hindus and Sikhs amongst the Hindu/Indic community. I would like to highlight a couple of responses we got from two particular visitors: an old man in a traditional attire with religious markings and a young man. Both responses highlight the malady that afflicts certain sections of our Hindu community.

The old man studied the pamphlet that we gave him. With great seriousness, he came up to us and insisted that these people should convert to Islam as they are facing persecution. I asked him as to why he did not convert to Islam. Ignoring the question, he went on belligerently to claim his religion was that of humanity and also stated that everybody has to die someday and so it did not matter what religion one follows. I excused myself from the conversation not because the man did not identify with our cause, but on the contrary was a cruel hypocrite, who was also not a humanist. What sort of a humanist would ignore the genocide of Hindus that happened in Pakistan during the Partition and continues to happen till date? What sort of humanist ignores the persecution of people and advocates curbing of free will in a society? Which true humanist would not show compassion to his own brethren?

Much later on a different day, two young men accompanied by one of their elders visited the stall. They were curious to know about the cause we were raising awareness for. While we were explaining them the underlying historical context of the issue, we saw them smirking with dismissive attitude. A few minutes later, one of the young man posed a question to us, which was a classic example of whataboutery. With supreme confidence, he asked “What about 1991 Gujarat riots?” We pointed him that the Gujarat riots happened in 2002 and the cause of the riots was that the Godhra Train carrying several Hindu men, women and children were burnt by the Islamist goons and a large number of Hindus were also killed in the subsequent riots. We also pointed out the need for our community to take care of our persecuted brethren as no any human rights organizations are taking up our cause. The elder escorted them away whence we asked them these questions. It has become fashionable to appear as a secular-liberal, even at the cost of being stupid and uncompassionate. I hope we rectify our education system and parenting, so that we can produce genuine human beings and not non-thinking, uncompassionate automatons echoing what the media wants them to.

However, these two episodes were noteworthy exceptions. We, otherwise, received several positive responses from the visitors. Many were curious, while some showed genuine concern and interest regarding our work with Hindu refugees from Pakistan. Some people were also surprised to know that there was even a Hindu community across the border! Overall, the responses were positive and we were able to engage with our potential support network.

On an ending note, I would like to again thank the Hindu Spiritual and Service fair for providing us a platform to raise awareness about the cause of Hindu refugees from Pakistan and connect with the public and potential supporters. It is our hope that endeavours such as this, transforms into institutions that could further help Hindu community to overcome its problems and flourish.