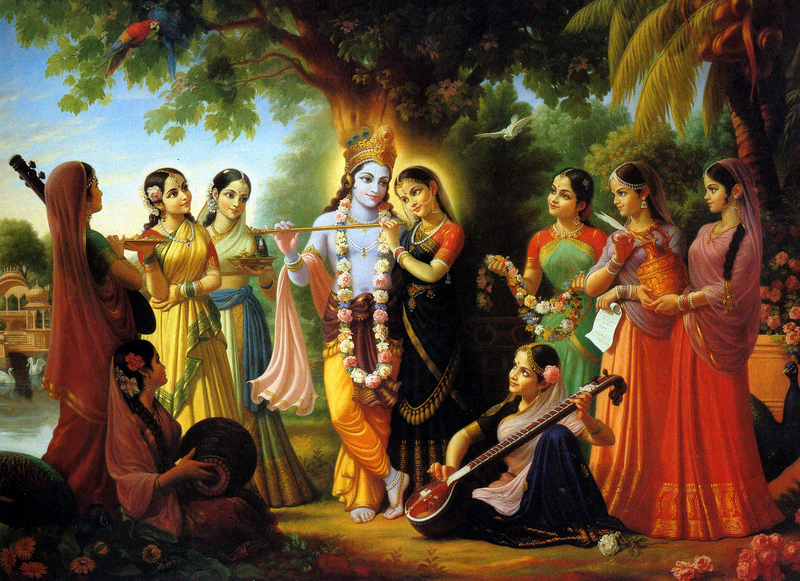 In the previous article while elaborating about how Bhakti is conceived as the ultimate Purushartha either independently or through its relationship with the four-fold Purusharthas, we briefly dealt upon two definitions of Bhakti, one given by Sage Narada and another by Madhusudhana Saraswati.

Let us now take a deeper look into these and few other definitions of Bhakti.

A similar definition is found in Shandilya Bhaktisutras, another authoritative text on Bhakti which says:

It (Bhakti) is the supreme unshakable attachment to Ishwara.

From the above definitions, we can discern two elements in understanding Bhakti:

In the previous article, we had extensively dealt with how Bhakti is the Supreme Goal of life. One of the arguments presented by Madhusudhana Saraswati (MS) to substantiate this is that Bhakti is of the nature of Supreme Bliss.

In the very opening verse of the Bhagavad-Bhakti-Rasayana, MS defines Bhakti and its relationship to Bliss thus:

(Bhakti is) the experience of incomparable happiness or bliss untouched by any suffering.

That is, it is a state which is full of happiness, but completely devoid of sorrow.

In the worldly pursuits we often experience happiness and sorrow either together or one succeeding the other. Pursuit of any worldly object or pleasure invariably ends in sorrow. If one obtains the object of pursuit, at best one will be happy for a short period of time, until such a time some other object catches his fancy and he or she becomes restless again. In case, one fails to attain the object of pursuit, one will end up in bitterness, frustration and disappointment. Be it as restlessness, or as frustration, happiness from worldly objects always remain tainted.

Contrary to this, MS notes that Bhakti is by nature blissful, where there is only happiness, untainted by any sorrow. It is because, devotion to Ishwara, the supreme deity, the cause of the universe, invariably frees one from the shackles of attachment to worldly pursuits and instead makes one remain steady and fixed in the joy generated by one-pointed devotion to Ishwara, who himself is of the nature of Sat-Chit- Ananda.

While explaining the beauty of Bhakti in one of his lectures, Jagadguru Sri Abhinava Vidyatirtha, the 35th Shankaracharya of Sringeri Sri Saradha Peetam notes that in Bhakti Yoga, there is always Ananda. Unlike the other paths like Jnana Yoga where one does not experience any bliss during the stage of Sadhana, since they are continuously involved in controlling their minds, strengthening dispassion and trying to meditate on the unconditioned Brahman, and will attain Ananda only after attaining their goal of Brahma-Jnana; in the Bhakti yoga, there is Ananda even in the Sadhana stage, during which the minds of the devotees remain immersed in the Lila or divine sports of Ishwara.

In other words, in the path of Bhakti, there is Ananda or bliss at all the times: both before and after attaining the goal of Bhakti! Hence, Bhakti is called as “Amruta-Svaroopa”.

The second element in the definition of Bhakti, one which is most crucial for a correct understanding of Bhakti is that it is “parama-prema-roopa” or “para-anurakti”- Supreme love or attachment towards Ishwara.

What is love? It is nothing but attachment and attraction towards the object of love. A husband loves his wife, a daughter loves her parents, a friend cares for his friend, and a teacher loves his student. In all these cases, there is a feeling of love, care, attachment, attraction towards the other person. And through interactions with such people, one derives happiness in life. But, these are limited in nature. These cannot be termed as “Supreme Love” or “Supreme Bliss”.

On the other hand, as the Brhadaranyaka Upanishad (1.4.8) notes, the Self or Atman is dearer than a son, dearer than wealth, dearer than everything else, because it is the innermost. Therefore, the love directed towards Atman which is of the nature of Sat-Chit-Ananda leads to the experience of infinite bliss.

There is another distinction between Bhakti and worldly love implied by the term “Parama Prema”. Worldly love towards our family and friends implies that we care for them, think about them, help them out, or do things for them. While one performs all that, one still enjoys a personal space. An individual is never dedicated to another individual in body and mind 24*7. Hence, it is not designated as Supreme Love.

Bhakti, on the other hand, is described as Supreme Love because, a devotee becomes so immersed in devotion to Ishwara that he or she becomes fully absorbed in the thought of Ishwara- 24*7. And it is this aspect, which makes Bhakti unique.

Bhakti as Mano-Vritti of a Melted Mind

Adi Shankaracharya (Acharya) answers this question in his definition of Bhakti enunciated in Shivaanandalahari (Verse 61). He says:

When the modification or thought-patterns of the mind reaches the lotus feet of Pasupathi and becomes seated there permanently, then that condition is called Bhakti.

That is, Bhakti refers to the condition of the mind wherein the thought-patterns continuously flow towards and the mind itself becomes one-pointedly fixed upon its object, which is Ishwara.

If Bhakti is merely modification of the mind such that it is one-pointedly focussed upon an object, how different is it from Yogic Dharana and Dhyana wherein the object of meditation could be gross objects like tip of the nose or subtle indriyas or tanmatras; or from Vedantic Niddhidhyasa practiced in Jnana Yoga wherein the mind contemplates on unconditioned Brahman?

While it is true that all the three: Bhakti, Yogic Dhyana & Niddhidhyasa share the common element of one-pointed fixing up of the mind on the object of meditation and it is also true that Acharya calls Niddhidhyasa also as Bhakti in his Vivekachudamani (verse 31); the Bhakti of the Bhakti Yoga we are discussing in this series is different from both Yogic Dhyana and Niddhidhyasa in one significant way. While Bhakti yoga can be practiced only by the melted mind, melting of the mind is not required for the practice of the other two.

Adding this distinctive feature of Bhakti that it requires a melted mind to Acharya’s definition of Bhakti, MS gives following definition in Bhagavad-Bhakti-Rasayana (verse 3):

The Manaso Vritti or the modification of the mind melted by the (practice of) Bhagavad-dharma that has become a continuous, stream-like flow directed toward Sarvesha or the lord of all is called Bhakti.

MS thus, puts three additional conditions for considering a Mano-Vritti as Bhakti: One, it must be a modification formed in the mind which has been melted by the practice of Bhagavad-Dharma; Two, it must be continuously and uninterruptedly flow towards Ishwara like the oil flows into a vessel; Three, the object of devotion is Ishwara who is the cause and controller of everything i.e. Bhagavan or Saguna Brahman and not any gross objects or subtle indriyas as in the case of Yogic Dhyana or Nirguna Brahman as in the case of Niddhidhyasa.

The Bhagavad-dharma or the duties of the devotees mentioned by MS refers to the practice of Nine Kinds of devotional activities, which are also called as Bhakti. More specifically, these nine kinds are Sadhana Bhakti or the means for attaining mature devotion as defined above. In Bhagavada Purana (Verse 7.5.23), Prahlada, the famous devotee of Lord Narasimha enunciates the nine-kinds of devotional practices thus:

Thus, MS provides a very comprehensive definition of Bhakti as a modification of the melted mind which is continuously and uninterruptedly flowing towards and fixed upon Ishwara.

In this context, we can also quote the five graphical examples cited by the revered Acharya in Shivanandalahari(Verse 61) to illustrate Bhakti.  The five examples are: the seeds of the Angola tree which flies back and become attached to the tree bark, the iron needle which immediately attaches itself to the magnet as soon as the magnet is brought near to it, the virtuous wife who is always attending upon her husband, the creeper which is forever embracing the tree bark and the rivers which invariably merges into the ocean.

Thus, contrary to popular perception, Bhakti is not mere faith, it is not mere chanting of bhajans or listening to Satsang. These devotional activities are designated as Bhakti only in the secondary sense of being a means to true and mature Bhakti. Bhakti in its primary sense refers to the highest love which is of the nature of modification of the melted mind directed continuously and uninterruptedly towards Ishwara.

In the verses 8-10 of Bhagavad-Bhakti-Rasayana, MS says that in such a melted mind as described above, Ishwara himself enters and becomes established permanently just as a colour added to the melted wax becomes forever established in the wax!