Reichstag Fire in the fight for free speech 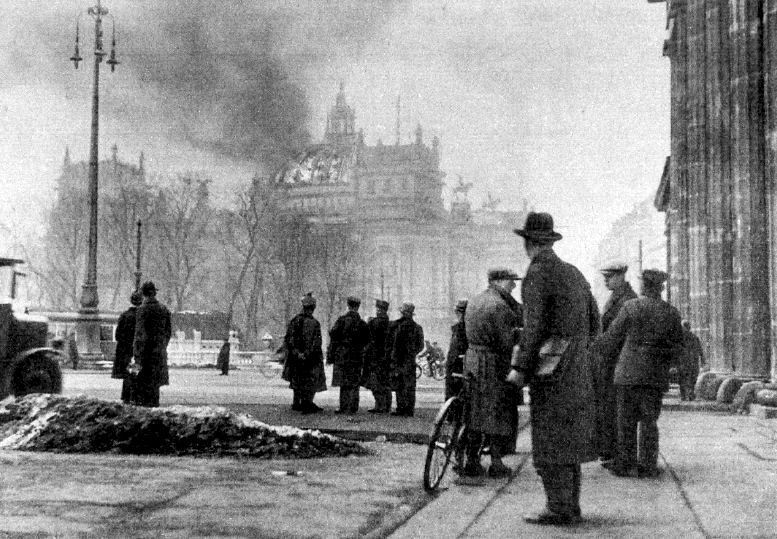 Hindus have now become the targets of the publishing industry which is responsible for a Reichstag Fire in the arena of free-speech rights.  These Hindu-baiters have indulged in self-censorship of a book but are busy spreading the untruthful claim that the book was actually banned by Hindus. Just as Hitler blamed his political opponents for an act of arson in 1933, the anti-Hindu forces are now going after Hindus by blaming them in a similar fashion. Consider the following headlines that appeared in the American media.

These dishonest claims about an alleged ban seem to be confined to the American press and do not seem to appear in the Arab, African or East Asian Press. To be fair, the Black and Hispanic press in the US too have not carried out any anti-Hindu propaganda until now. This is consistent with the experience of Blacks in the US in the 1960s which led Mohammad Ali to say, ‘No Vietcong ever called me nigger.’

The headline by Christian Science Monitor is interesting for another reason: it carefully suppresses the fact that the complaint against the book that was pulled by Penguin Books is nearly four years old and it makes the dishonest claim that the “ban” took place because it is an election year.

There is a precedent to banning one’s own book and accusing Hindus for it. In 1995, when Salman Rushdie wrote the Moor’s Last Sigh, the press tried to get Shiv Sena’s Bal Thackeray to issue a threat. He did not take the bait and instead refused to comment on the book, so the publishers (Rupa and Co.) decided on a self-ban, perhaps in the hope that they could generate a controversy and boost the sales of the book. However, things moved faster than they anticipated and the Central government promptly banned the book when they found that it had a dog named Jawaharlal.

As the Independent reported:

Gossip sweeping New Delhi had it that Sonia Gandhi, the widow of Rajiv, read the first few chapters of Rushdie’s novel and was so incensed by the dog Jawaharlal that she is demanding the book is banned across India by the Congress government. The Prime Minister, Narasimha Rao, is smarting from the widow Gandhi’s accusations that the government has not done enough to track her husband’s assassins, and he might want to pacify her over Rushdie’s novel.

As soon as the government ordered the ban, the publishing house which had indulged in the self-ban changed their minds about banning the book and appealed to the court asking that the ban be removed!

Even today, Hindu-baiters continue to blame Hindus for this episode. They are ably supported by the Gunga Dins who carry water for them. Among those currently pontificating to the Hindus on the virtues of free-speech are two writers named Sadanand Dhume and Salil Tripathi. Their smug suggestions today are contradictory to their position a few years ago.

In an article jointly authored by the two of them when the government banned the Marathi play, ‘Mee Nathuram Godse Boltoi,’ this is what they wrote in the Far Eastern Economic Review.

The banning of a play in Bombay… has sparked a bitter debate and raised critical questions about the kind of nation India wants to be – secular, democratic and liberal, or nationalist and Hindu.

So free speech is “nationalist and Hindu” while banning plays is “secular, democratic and liberal.” That much all of us can agree upon! The authors elaborate on this position and go on to endorse the concept of banning any speech that runs counter to their beliefs. At the same time, they also praise “leftists, centrists and socialists” for being on the side of the ban.

The controversy over the play reflects a greater drama being played out on the nation’s political stage. On one side are those who believe in the 50-year-old liberal democratic model, represented by the leftists, the centrists and the socialists. On the other are those who seek a nationalist, Hindu model, championed by Rashtriya Swayamsevak Sangh and its political arm, the Bharatiya Janata Party, and other pro-Hindu nationalist parties like the Shiv Sena.

In another article entitled “Shadowy Second Self” that appeared in the Far Eastern Economic Review in 1998, Sadanand Dhume complained that the Rashtriya Swayamsevak Sangh was influencing the views of Prime Minister Atal Bihari Vajpayee and the Bharatiya Janata Party. It is truly a wonder that Dhume now claims to be an advocate of free-speech rights even though he wanted the Indian government to block out the views of a legitimate entity.

I first encountered Salil Tripathi on the mailing list of South Asian Journalists Association (SAJA). He introduced himself as a civil rights advocate, and in particular, a supporter of the American First Amendment rights. Not long after, it turned out that free-speech for Salil was merely a stick with which he could beat Hindus whenever it suited him while advocating the trampling of such rights at other times. During one of the discussions on the mailing list, he announced that Laloo Prasad Yadav deserved to be considered a hero for the single act of arresting LK Advani who was responsible for giving speeches around the country.

Anyone who has debated a Communist or anyone belonging to one of the hundreds of varieties of socialists will soon realize that they skirt the issue on every topic and hurl a few choice cliches at their opponents. “Nothing is in black and white, everything has shades of gray,” they will assert. “It is complex” is another refrain meaning that they have no idea of how to analyze an issue and form a firm opinion. Then there is that single word – nuance. In commie-speak, ‘nuance’ means they just deviated from the truth. Scroll back up and read the first quote from the article by Salil and Dhume. You will see that they claim the ban sparked a debate in the country. ‘Sparked a debate’ in commie-speak means they just committed a huge crime and hope to cover it up with words or hope to get a consensus from all their friends, which, in some unexplained perverse way, will wash off their guilt.

Salil has a history of hypocritical positions on free-speech rights. He ignored the ban by Congress-run state governments on the movie Da Vinci Code even though he wrote on the topic of free-speech at that time and was called out on it. He also took every opportunity to blame Hindus and injected the idea of intolerant Sikhs and Hindus into his arguments when he wrote an article on the Mohammed cartoons in Denmark.

Many of his recent pieces have been thinly disguised articles pretending to defend free-speech rights but they are really attacks on the victims whose rights were violated. The ban on Geert Wilders’ Fitna was a chance for him to write a negative review of the movie.

There is another angle to the selective application of free-speech rights. Sadanand Dhume once lived in Indonesia but found it prudent to zip up and not write about the lack of free-speech rights in that country when he lived there. No matter what their position on the topic of freedom of expression, there has been one constant: they have always been on the side of people with immense political strength and who are entrenched in institutions that share power no matter which political party runs the government. It would have meant something if they had defended powerless people who were real victims instead of chasing titles, prizes and positions with international institutions. Joining the ruling class elites in various countries and enriching oneself by keeping one’s principles flexible is not free-speech advocacy but sheer opportunism.

Among the groups Salil has worked for and whose views he has aggressively pushed is Amnesty International. He has also written for the publication ‘Index of Censorship.’ This is a Marxist publication which routinely accuses others of censorship but is itself guilty of indulging in censorship in order to appease Muslims.

On his part, Sadanand Dhume works for the American Enterprise Institute which operates in the area of advocating certain policy prescriptions. When people get paid to articulate political agendas that serve the interests of institutions operated by the ruling class in Western countries, such people, in essence, become Gunga Dins who carry water for their paymasters. This is especially true as these institutions exist solely to belittle countries outside the Western civilization.

The so-called “think-tanks” in the West do not seek to enrich their worldviews or shape their policies when they hire Indians. Instead, these organizations represent the interest of certain political entities with firm political opinions and they hire Indians only as viceroys of these opinions. These viceroys have the specific task of indulging in propaganda on behalf of their employers. Even when not specifically tasked to do so, the employees continue with the propaganda in order to prove their credentials and endear themselves to their paymasters. In this context, it should be kept in mind that both Salil and Dhume have written against Muslims after the Islamic terrorist attacks occurred in New York City and London.

If the two authors have the honesty and intellectual ability to discern between real violations of free-speech rights and false flag attacks, they should not target Hindus, but make a few honest admissions. First, they should admit that the current controversy in which they have blamed Hindus is a wholly manufactured one and that it is wrong to blame Hindus for it. Secondly, they must  admit that they were wrong when they supported bans on plays in India. Finally, they should also admit that all over the world, laws against free-speech rights are created by groups they support. Apart from Christian and Muslim fundamentalists, such groups include those who label themselves “leftists, centrists and socialists” or “secular, democratic and liberal,” that is, people Salil and Dhume endorsed in an article jointly authored by them.

The laws related to hate-speech in India were legal weapons for such people in their zeal to suppress the freedom of expression of Hindus. This time, one of their own allies was made to trip on the legal hurdle by a smart litigant. Just as a bomb in Iraq recently blew up killing a suicide attack trainer and his class, a creation of the intellectual Al-Qaeda has blown up in their faces injuring one of their own people. If the two authors do not correct themselves and admit to these facts, in the interest of basic decency, no media outlet should allow them to pontificate about free-speech rights.