Relishing the ‘Rasa’ of Bhaagavatham 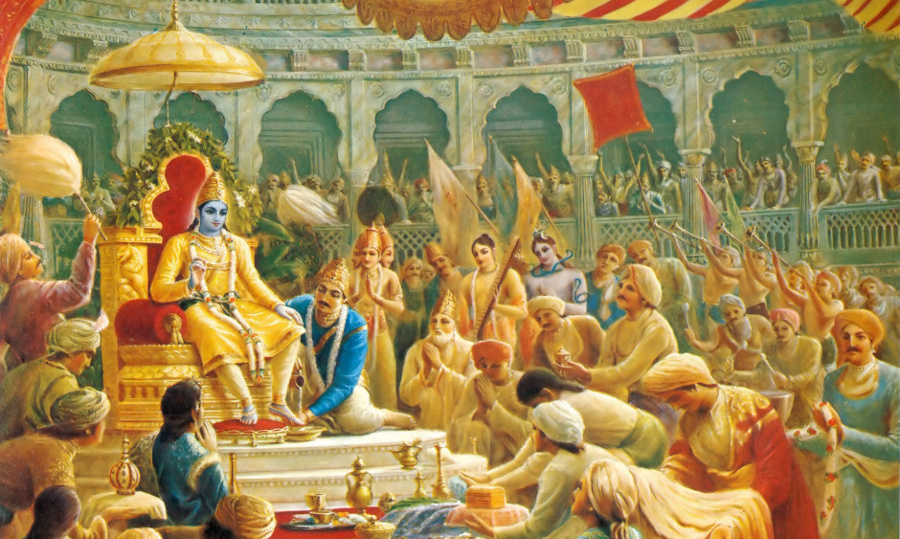 Heritage Parampara, a Bengaluru organization dedicated to the dissemination, preservation and understanding of Heritage and Culture in collaboration with Indic Academy, had organized a two-day workshop on Srimad Bhaagavatham, as part of the 8th edition of Gudiya Sambhrama Festival. The workshop was held on February 3 and 4 at Sri Varaprada Devagiri Devastanam, Banashankari, Bengaluru.

While the original line up of speakers at the workshop included Dr. Pappu Venugopala Rao, Dr. Srinivasa Acharya, and Prof. Nagaraj Paturi; owing to some personal reasons, Dr. Venugopala was unable to attend the event. In his place, the organizers invited Prof. K. S. Kannan to speak on the first day.

Prof. Kannan also spoke extensively on the Raasa-leela Adhyayas of the Bhaagavatham, especially on the Gopika Geeta or the Songs of separation song by the Gopis. Raasa-leela Adhyayas occur in the tenth canto of Bhaagavatham which narrates the life and leela’s of Sri Krishna. These Adhyayas focus on the intense longing and Bhakti of the Gopis to be united with Sri Krishna, which culminated in Sri Krishna blessing them by playing the divine dance & play of “Raasa-leela” with them. Prof. Kannan noted that there is a blend of Sringara and Adhyatma in this. The pain faced by the Gopis, due to separation from Krishna, was so intense that the heat generated by this pain destroyed both their sins and merits and thus granting them freedom from the bondage of Samsara. He added that the episode points to the fact that even a very simple and mundane activity of the Lord like dancing and romancing can be used for meditating on the Lord and attaining Him.

The morning session of the second day was taken by Prof. Nagaraj Paturi, who has decades of teaching and research experience in the fields of Indic Knowledge Studies, Vedic Studies, Linguistics Culture and Myth-literature studies. Speaking on the theme of Bhaagavatham as a living culture, he noted that the text of Bhaagavatham is a text which documents the culture of Bharat. In fact, it is not a book, but the culture itself. Criticizing the current academic treatment of Bhaagavatham, Prof. Paturi stated that unlike the Greek Classics which no longer has a living culture, Indian texts have a very flourishing living culture and as such, texts like Bhaagavatham cannot be studied purely as a textual relic of the must but must be understood with reference to the living culture. Therefore, Bhaagavatham can be truly understood by interpreting the text through its living expressions in culture and not by approaching the text in isolation.

Elaborating further, Prof. Paturi said that Bhaagavatham is actually about Indians, about Hindus who are living the leela, who are living like the Gopis aching to be united with Lord Krishna. Hence, for the devotees Vrindanvan is still the place Krishna continues to perform all his leelas. Krishna’s leela is not just a historical event of the past, but is happening very much in the present for the devotees. And Bhaagavatham as a text provides this Rasa-experience to all the readers and listeners of Krishna’s leela. Bhaagavatham is thus being lived by people through reading, listening, and enacting Krishna’s leela on stage. He noted that various Vaishnava traditions, be it dedicated to Srinath ji, Vittoba or Swaminarayan, they are all Bhagavata traditions only and include people who are living Bhaagavatham every single moment.

Prof. Paturi gave an interesting example regarding how Bhaagavatham is lived on the ground. Prahlada Yakshagana is performed each year at a number of places in Odisha and Tamil Nadu. At the end of the Yakshagana, when Narasimha appears out of the pillar and kills Hiranyakashipu on the stage, the audience goes onto the stage and perform an “aarati” to the Narasimha. The “aarati” is not being performed to the actor who dons the role of Narasimha, but to the deity Narasimha who has been invoked and enacted in the Yakshagana. Prof. Paturi noted that this is one of the best examples of reliving and reenactment of Puranic accounts. The Yakshagana is perceived not just as a play, but as an enactment of the Avatara’s Leela itself and all people, including the audience participate in the Leela. He concluded by saying that the living culture of India is the living commentary on the text of Bhaagavatham and hence, the text must be read and understood in the context of how it is being lived by Hindus.

The afternoon session was on the theme of “Rasopasana”, which was conducted by Dr. Srinivasa Acharya, who is an engineer with a doctorate in Bhakti Rasa. Explaining the meaning of Rasopasana, he said, Rasa refers to an experience of divine love and a meditation on such an experience is Rasopasana. He noted that this kind of upasana is very prevalent in the spiritual traditions of Vrindavan, where it was popularized by Swami Haridas and Hita Harivams Mahaprabhu. Dr. Acharya stated that Bhaagavatham, which teaches Rasopasana through the leelas of Sri Krishna in Vraja with Gopis, is considered as “Parama-Pramana” and the very essence of Veda, Upanishads and Brahmasutras.

Placing the Rasopasana, within the larger context of Indian spiritual traditions, Dr. Acharya noted, while Karma-khanda in the form of Varna-ashrama dharma taught in the Vedas are applicable till a person attains Vairagyam, the teachings of various Yogas in the Bhagavad Gita leads one to surrendering to Bhagavan. The teachings of Srimad Bhaagavatham take up from where the Gita leaves and teaches Shuddha-Bhakti, especially in its tenth canto. Even in the tenth canto, in the chapters dealing with Raasa-Leela, the Bhagavatham teaches the highest form of Bhakti, the Madhura or Sringara Bhakti. It is the inculcation and practice of this Bhakti by meditating on the activities of Gopis, Radha, and Sri Krishna, is termed as Rasopasana. Dr. Acharya also gave a brief, but beautiful demonstration of the Rasopasana by singing songs that generated Madhura Rasa.

The two day workshop was very enlightening and provided a unique vision into the depths of Bhagavatham, especially in the context of Bhakti rasa.

So if you are already familiar with Cisco routers and TCP/IP, this may be a better solution for you. Finally, we recommend the Bryant Advantage Ultimate CCNA Study Package.
cisco
But it is a solid solution. The next suggestion is the Cisco Press CCNA study guide. This is a more expensive solution and is written in technical terms and probably does not explain some of the concepts as clearly as the Sybex Guide.
200-125
If you want to pass your ICND1, ICND2 or CCNA exam on the first try, it is essential you have a sound, effective study plan that is proven and other Cisco CCNA students have followed to successfully pass their 200-120, 101-101, or 200-101 tests.
300-115 switch
Of course, Cisco 200-125 dumps are not intended for people who didn’t study CCNA 200-125 at all.
210-260 pdf
Most CCNA study guides are about 800 pages so there are lots of concepts and nuisances that are covered and we highly recommend you purchase a CCNA study guide to assist you in your self study efforts.
http://www.passexamway.com/
It is actually suggesting that the applicants preparing for CCNA Routing and Switching 200-125 Cisco Certified Network Associate, use both the preparation approaches. This will help all applicants to earn the assistances of both the approaches.

It is actually suggesting that the applicants preparing for CCNA Routing and Switching 200-125 Cisco Certified Network Associate, use both the preparation approaches. This will help all applicants to earn the assistances of both the approaches.
cisco
When you purchase a lab kit form us you will get a lab workbook to help guide you through your labs. But the lab workbook does assume that you have some basic knowledge about Cisco routers and switches.
200-125 dumps
Just focus on over study material for the preparation of CCNA Routing and Switching 200-125 Cisco Certified Network Associate.
http://www.itcert-online.com/
It is written in layman’s terms for very green students and it the cheapest solution. However I have found that it does not go as in-depth to some topics as I might like.
210-260 iins
We are providing the helping material in two ways which are • PDF • Practice Test Software PDF Exam – the first technique expected of applicants to prepare for CCNA Routing and Switching 200-125 Cisco Certified Network Associate, are hand notes that consist of full, comprehensive information about every CCNA Routing and Switching 200-125 Cisco Certified Network Associate area.
300-115 pdf
A candidate being able to correctly answer all of the questions encompassed in Cisco 200-125 dump is very likely to pass the exam with flying colors, so if I were you, I would jump at the chance to get a high score.