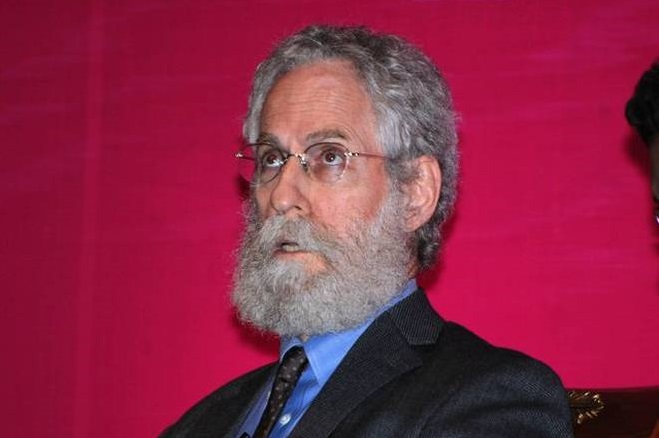 Once again Prof Pollock has courted controversy by touching upon sensitive topics. His interview as published in Indian Express on May 31, 2018 has raised several eyebrows and buffeted social media discussions. I was blissfully ignorant of this interview (I am not someone who would be easily fettered by such casual remarks to rouse negative feelings), until I found myself tagged in a FB post on the topic. Then came a call from a friend in the US prompting me to respond. Upon reading the said interview, I decided to respond for at least two reasons – his mention of the JNU controversy of student unrest and his mention of the Sanskrit studies in JNU. Though frankly speaking, not everything is so bad in his interview.

Let me begin by saying that I have a lot of respect for Prof Pollock for his scholarship which is very different from the traditional Sanskrit scholarship in India. Sanskrit scholars have a deep binding focus to their discipline unlike the broad approach of the India studies scholarship generally practiced outside India. It is another matter that the number of serious Sanskrit scholars may be dwindling in India despite an increase in the number of Sanskrit institutions in India. In my view, Prof Pollock belongs to a genre of India studies scholarship which may be broad but not focused to one particular branch of study involving primary Sanskrit shastraic texts. In this respect, I would like to contrast him with the likes of Prof Cardona who have deep focus on a particular shastraic discipline.

Though I agree with Prof Pollock’s argument about Sanskrit’s cosmopolitan inclusiveness, it is unfortunate that he has to time and again talk about ‘miseries of the caste’ and in some way hold Sanskrit responsible for it. His faint suggestion linking Sanskrit with it is incorrect. He also seems to be effectively contradicting himself with his claim that brahmans did not control Sanskrit. The Sanskrit texts are replete with references to who is a ‘brahmana’ – as one who possesses all the good qualities of truthfulness, generosity, compassion etc. In fact the impact of Sanskrit is such that whosoever adopts it becomes a brahmana.

Prof Pollock is wrong in claiming that the only job that a Sanskrit student would get is that of a ‘pujari’. I am sure he knows that this is just another occupation that Sanskrit scholars can take. There are more than 18 universities exclusively for Sanskrit and more than 150 departments teaching it at graduate levels and hundreds and thousands of schools all over India. Where does he think these institutions get their teachers from? The Indian language technology industry benefits from the immense insights from Sanskrit grammar and many of my students are working in the language technology industry. These are just some of the opportunities that Sanskrit students have in India. With more than 80 percent of Hindu India and the affluent expat population worldwide, there is an increasing need for good priests and demand for courses which train Hindu priests today. Then why is JNU wrong in planning to start such a skill and job oriented diploma course? I think Prof Pollock knows how the temples in India even today are centers of economic activities and basic education. Therefore his ridicule of ‘pujari’ as a profession and of JNU in starting such a course is in bad taste.

His contention that good Sanskrit scholarship is not to be found in India anymore has been often quoted by many outsiders (those not familiar with the Sanskrit tradition). I think he needs to do a little more digging and get hold of a directory prepared by Sanskrit Sansthan and perhaps visit some of the departments whose website he has looked up. I extend my invitation to him to visit the School of Sanskrit and Indic Studies in JNU and engage in discussions with scholars who are deeply concerned with one particular branch of study in Sanskrit shastraic tradition. Scholars like me have nothing against Murthy classical library project given to Prof Pollock. However, in my opinion, the same project could have been done in much less cost and with much more authority and efficiency in India for the simple reason that there are more Sanskrit scholars in India and they can be hired to work for much less. A university like JNU could have very efficiently managed such a large project and with much less cost and could have produced much more authoritative translations of texts of India’s scientific and cultural heritage. Also Indian language translations should probably be a priority. Besides the cost and efficiency, the more serious aspect is the underlying intention in selecting certain kind of texts and interpreting them from a certain colored vision of India. Rajiv’s book “Breaking India” nicely catalogs such individuals, institutes and agencies.

I am surprised by Prof Pollock’s attention to JNU reflected by repeated references. Whether our students have a right to say anything is to be seen by our administration, our constitution, laws and judiciary. Does a student on the US university campus have a right to burn US flag or talk about splintering the great nation that USA is? How many petitions has Prof Pollock signed guaranteeing such ‘rights’ for US students? Did the Chinese students have a right to free expression when several hundred of them were gunned down and run over by Chinese tanks in the Tiananmen Square? Did he or any of his fellow scholars sign a petition in their support? The freedom of expression guaranteed to every citizen in India comes with certain well defined constraints. India has an elaborate judicial system to ensure legitimate freedom and good behavior that is expected from its citizens. Every nation has its share of problems which is best understood and appreciated by its citizens. Prof Pollock is advised to focus on well known issues concerning the US socio-cultural scenario than worry about India too much.